This fun, alternate history is full of WWII period, and beyond, action. 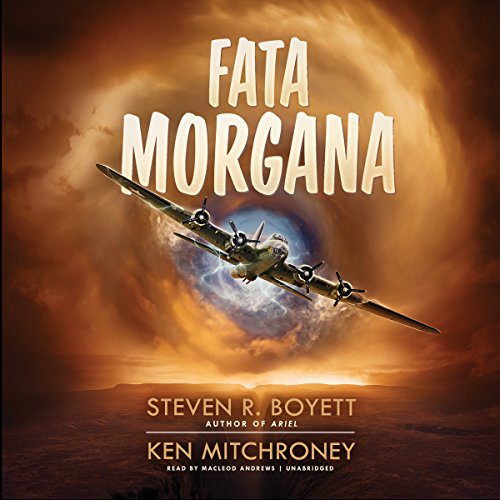 
Publisher's Summary
At the height of the air war in Europe, Captain Joe Farley and the baseball-loving, wisecracking crew of the B-17 Flying Fortress Fata Morgana are in the middle of a harrowing bombing mission over eastern Germany when everything goes sideways. The bombs are still falling and flak is still exploding all around the 20-ton bomber as it is knocked like a bathtub duck into another world.
Suddenly stranded with the final outcasts of a desolated world, Captain Farley navigates a maze of treachery and wonderand finds a love seemingly decreed by fate—as his bomber becomes a pawn in a centuries-old conflict between remnants of advanced but decaying civilizations. Caught among these bitter enemies, a vast power that has brought them here for its own purposes, and a terrifying living weapon bent on their destruction, the crew must use every bit of their formidable inventiveness and courage to survive.
Fata Morgana—the epic novel of love and duty at war across the reach of time.
©2017 Steven R. Boyett & Ken Mitchroney (P)2017 Blackstone Audio, Inc.


Review:
Captain Joe Farley and his WWII flight crew are relieved to get a new B17 when their first one barely limps into base. They name their new plane Fata Morgana and Joe describes a mysterious woman to be painted on the nose. They pick up a new crew member, a Native American who bailed from his plane which shockingly arrived back to base with an all dead crew.

The crew is part of a bombing mission during which the formation comes under attack by German bombers. Suddenly the Fata Morgana is pulled into a dark cloud and spit out into a desolated world. The planet appears devastated and the crew is alarmed when two opposing teams converge on them, one trying to protect them and the other attacking them. It appears the teams are from two rival colonies who are trying to get the plane for their own use. And that these people are not the worst enemy they will face.

The wisecracking crew members are stranded unless their mechanic wizard can get the plane working again. Meanwhile they are all surprised, especially Joe, when the woman of his dreams appears in front of them! She convinces them to return to her community but not everyone is as welcoming as she is. The crew makes friends but will have to survive betrayal to have a future.

The story starts a little slowly as the authors introduce and develop the crewmembers. There is fun banter and baseball camaraderie shared even during the stresses of war. The battle scenes are well written with action and tension. Once the plane crashes in the other world there are totally different tensions and conflicts the crew must face. I liked the well-developed characters, the action, the romance and the plot twists. The romance grows slowly and warmly to mature to a point of heartbreak. There is a strange scene involving limited characters around the center of the time whirlwind. This gives some of the surprising background of the world. I anticipated the betrayal but didn’t see all of the twists which made it interesting.

This isn’t as good as my favorite alternate history/universe series, The Destroyermen series, but it was a fun, fill-in listen. I recommend this to readers/listeners who enjoy World War II era and/or the alternate history genre.

Audio Notes: Macleod Andrews does a wonderful job with the narration. He captures the variety of character accents and energies. His narration helped to bring the story alive. The narration enhanced the story for me and I would be glad to listen to more by this narrator.