This is spicy sexually but a very warm romance in a space sci fi. 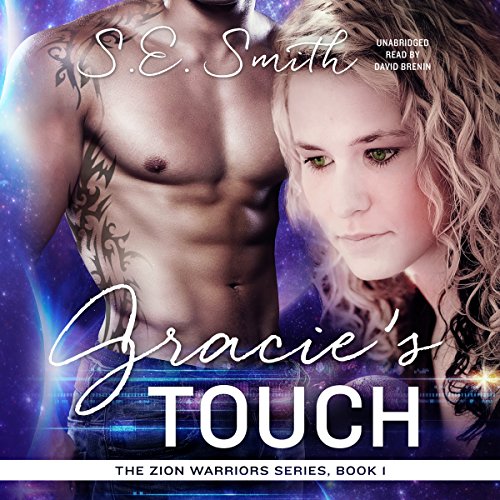 Publisher's Summary
New York Times and USA Today best-selling author of science fiction and paranormal romance brings another action, adventure, and suspense-filled story to transport listeners out of this world. Gracie Jones was little more than a child when Earth was invaded by an alien species. Escaping into the subway tunnels of New York City, she hid in fear of being captured. Discovered by four men who became her protectors, she fought alongside them, and they became known as the Freedom Five. At 17, she made a decision that turned the tide in the war between Earth and the Alluthans, but in exchange, she gave up all that she knew. Kordon Jefe is a Zion Warrior and the commanding officer in charge of the Confederation of Planets' military. When an unknown species begins attacking some of their outer settlements, he is assigned to discover who they are and stop them - at any cost. Gracie finds herself stranded millions of light years and hundreds of years in the future in a distant galaxy on an undeveloped moon. When an old enemy threatens once more, she does not hesitate to use her knowledge to try to stop them once again. Only this time, it is not just Earth she will be saving, but the Confederation itself. When their two worlds are thrown together, Kordon is unsure what to do with the strange, delicate creature who fights and behaves unlike anyone he has ever encountered before. One thing he does know - he plans to keep her.
©2016 S.E. Smith (P)2017 Blackstone Audio, Inc.


Review:
Gracie was just a child when she survived the invasion of a brutal alien attack that decimated humanity on earth. Gracie hid in the subway tunnels until she was brought under the protection of a group of young men. The five rebels became known as The Freedom Five who led a revolution against the aliens. The only way to defeat the enemy was for Gracie to risk infiltrating the enemy mothership. She succeeded but instead of returning to earth the stolen ship she was on was hurtled deep in space to an “unknown” planet. Gracie survives on the planet and after three years despairs of ever hearing another voice. To her surprise her radio outreach attracts a lead military ship of the Confederation of Planets'.

Gracie’s gentle voice pulls in captain Kordon Jefe, a strong, usually unexcitable, Zion Warrior. Kordon becomes obsessed with finding the woman behind the voice even as his team warn him that it might be a trap as the ship is similar to a recent mysterious enemy who has been attacking isolated mining worlds.

Gracie has linguist and technical knowledge that can help the Confederation. The time travel changes the situation for Gracie. Her joy at being rescued soon turns to devastation. How can Kordon and his crew convince Gracie to fight the common enemy? And how can Kordon convince Gracie to forget her first love and take a chance on a current love? He’ll figure a way to woo her since he isn’t going to give her up.

I enjoyed the space sci fi elements, the danger and the action. In addition to the threat of the Alluthan enemy, there is an enemy closer to home who poses a threat particularly to Gracie. Not all of the plot threads are realistic so some of that has to be overlooked to enjoy the rest of the story.

All of this is a setting for a strong romance between an emotionally hurt human and a normally unemotional warrior. Kordon wants to be this big, protective mate, but of course, there is no real way to control an independent human female! Part of the fun of the story is watching (listening to) the couple grow in their relationship. (There is a secondary romance between other crew members too.) The sex elements are a little to heavy for me – Audible labeled “hot d..n”.

Audio Notes: David Brenin does a very good job with the narration. He provides believable female voices as well as strong male voice. He carries the story plot lien with appropriate pacing and energy.