I was caught up by this story right away.
The Watchmaker's Daughter
Glass and Steele, Book 1
By: C. J. Archer
Narrated by: Emma Powell 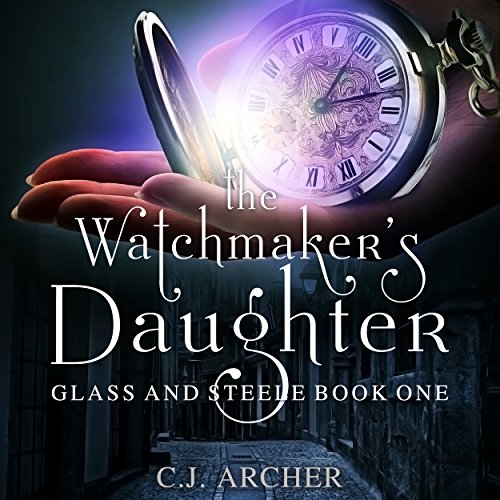 Publisher's Summary
India Steele is desperate. Her father is dead, her fiancé took her inheritance, and no one will employ her, despite years working for her watchmaker father. Indeed, the other London watchmakers seem frightened of her. Alone, poor, and at the end of her tether, India takes employment with the only person who'll accept her - an enigmatic and mysterious man from America, a man who possesses a strange watch that rejuvenates him when he's ill. Matthew Glass must find a particular watchmaker, but he won't tell India why any old one won't do. Nor will he tell her what he does back home, and how he can afford to stay in a house in one of London's best streets. So when she reads about an American outlaw known as the Dark Rider arriving in England, she suspects Mr. Glass is the fugitive. When danger comes to their door, she's certain of it. But if she notifies the authorities, she'll find herself unemployed and homeless again - and she will have betrayed the man who saved her life. With a cast of quirky characters, an intriguing mystery, and a dash of romance, The Watchmaker's Daughter is the start of a thrilling new historical fantasy series from the author of the best-selling Ministry of Curiosities, Freak House, and the Emily Chambers Spirit Medium books.
©2016 C.J. Archer (P)2016 C.J. Archer


Review:
India Steele has worked closely with her watchmaker father hoping to become his apprentice and take over his shop one day. Sadly, women are not allowed into the Watchmaker’s Guild and its leaders aren’t willing to make her the first, no matter how good her skills. Her father dies before she is wed, leaving the shop to her fiancé. However, as soon as the funeral was over he broke off the engagement. No other shop is willing to hire her due to the stand of the Guild leaders.

India accidentally meets a man from America who is seeking a particular watchmaker although he doesn’t even know his name. India sees that the mysterious man, Matthew Glass, has a strange watch that rejuvenates him. Mr. Glass surprises her by offering to employ her to help him find the special watchmaker. He even offers her room and board in his home where he has a ‘cousin’ who can serve as chaperone. The cousin turns out to be a rough and tumble woman dressed in breeches who is more interested in gambling at night than playing chaperone. The other men of the household are equally strange but at least the coachman, a very large fellow, is kind to India.

When India reads a news article about an American outlaw, the Dark Rider, and his band, who are supposedly in London, she begins to suspect Glass and his friends. She’d like to turn them in to collect the handsome reward, but she must find proof first.

India meets with unexpected hostility as she helps Glass visit the watchmakers around town. The head of the Guild even tries to frame her as a thief, but Glass protects her. Now India has another mystery to unravel in her own community even as she tries to help Glass on his quest.

Danger arrives at their door and the authorities are not willing to listen to pleas to resolve the mistaken arrest. India is the only one who can save Glass although she puts herself in path of a killer to do so.

I was caught up in this story right away which made for quick listening. I liked India, Glass and his unusual friends. I felt for India in the betrayal and limitations that she faced. But she is brave and persistent. The mystery of the strange watch is ultimately revealed while raising questions of magical ability. The plot and characters are well written and the story moves at a good pace. I thoroughly enjoyed this story and want to find out what happens to these characters in the series which I plan to continue. I recommend this to readers who like a fantasy with magic elements, mystery and strong characters.

Audio Notes: I really enjoyed the narration by Emma Powell. She captured the emotions and mystery of the work while providing good voices for the characters. I would enjoy listening to more of her narration and I hope she narrates more in this series.


Source: Audible Sale Purchase February 2018. This qualifies for my Audiobook Challenge and 2018 Alphabet Challenge.
Posted by Martha Eskuchen at 11:18 PM