This is a nice historical romance with a good blend of romance and suspense.
Gallagher's Pride
By: MK McClintock
Narrated by: Alan Philip Ormond 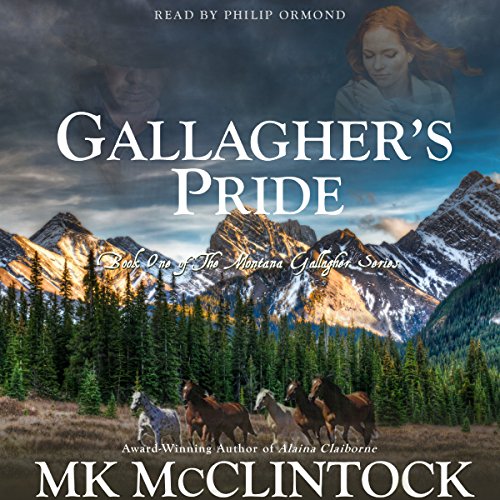 Publisher's Summary
She was a on a quest of discovery. He was on a quest for revenge. Together they would discover a second chance.
Brenna Cameron travels from Scotland after losing someone she loves in search of family she didn't know existed. Alone now in the world, Brenna makes an arduous journey, following the trail of discovery to Briarwood, Montana. Here she meets Ethan Gallagher, and the rest of the Gallagher clan. Only with their help is she able to discover lost family, heal old wounds and embark on a treacherous confrontation with a man who destroyed her family.
As head of the Gallagher clan, Ethan has more than enough to occupy his thoughts and time-he didn't need the complication of Brenna Cameron and he certainly didn't need the trouble that came with her. Ethan takes on the unwanted duty of self-appointed protector to the headstrong Scot, only to discover there is such a thing as second chances and more to life than revenge.
The Historical Western Romance Montana Gallagher Series:
Book One - Gallagher's Pride
Book Two - Gallagher's Hope
Book Three - Gallagher's Choice
©2012 MK McClintock (P)2014 MK McClintock

Brianna is a strong Scottish lass who thinks she is alone until her dying father tells her of her mother's parents in America. Apparently her grandfather disowned her mother when she married her Scottish father instead of the fiance her controlling father had picked for her. Armed with a letter rejecting her mother and children, Brianna heads to America for answers.

Brianna arrives in rough Montana where her PI located her grandparents. She is lucky to meet Ethan Gallagher and his brother when she is accosted by a leering drunk right after stepping off the stagecoach. Brianna is invited to stay at the Gallagher ranch with their sister and housekeeper to keep things respectable. Little does she know that the ranch borders her grandfather and the relationship between the two families are strained at best.

Brianna learns that her grandfather is a mean and bitter man who drove off his own wife. She decides to follow the path of her grandmother in case she can be found. That quest sets off events of suspense and danger, including kidnapping and a shootout.

As they travel, Ethan begins to see a remarkable strength and bravery in Brianna. He might be interested if only he can get past the betrayal of his former fiancé who was found with another man the eve of their wedding. Brianna is falling for Ethan but she won’t accept less than a full commitment.

This is a charming story with characters I really liked. There is a little mystery and suspense to fill out the romance which is on the edge of sweet (simmering, as noted). Ethan’s siblings are lively characters and I am sure there are more good stories coming for the family. I recommend this to readers who enjoy warm, historical romance.

Audio Notes: I enjoyed the rich accents of the narrator, Alan Philip Ormond. He captures the Scottish brogue and good old country Midwest. The narration enhanced my enjoyment of the story.