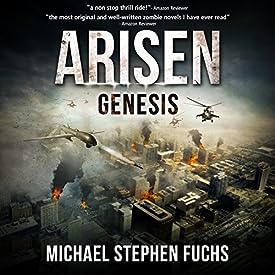 Publisher's Summary
Tucked away in a high-tech Tactical Operations Center, inside an isolated safehouse in the Horn of Africa, sits Agency analyst Zack Altringham. He is Kenyan-born, Princeton-educated, badly burnt-out - and condemned by his language and cultural skills to a lifetime of fighting America's shadow counter-terror wars. But when another mystery epidemic breaks out, terrifyingly quickly it reaches a tipping point and chaos descends - and Zack and his team (including two former Team Six SEALs) are trapped between the millstones of the sick and the dying on one side, and heavily armed militias on the other. Soon their "safe" house is in flames, and their only remaining option is to get in their up-armored SUV and try to escape the imploding gravity well of the city, to the safety of the American military base in Djibouti. But by then, will there be anywhere safe left on Earth to escape to?
©2012 Michael Stephen Fuchs (P)2014 Podium Publishing


Review:
This is military v zombie tale which explains how the virus outbreak starts. A special CIA team is deep in Africa providing tactical intel on the continual unrest in the area. The team consists of two analysts, Zach and Baxter, supported by two former Seal protectors, Mad Bob and Duggin. People in the area are beginning to show signs of illness – then it becomes more serious. This is no simple civilian unrest but something much worse. As they begin to witness the infected people turning into attacking zombies, the team monitors events from their well-equipped safe house. Zach is able to make contact with his superiors in Langley but the plague isn’t limited to Africa and there will be no support coming from the states. Within two weeks their safe house is overrun and they are out on the streets in a desperate run for safety to an American military base.

The story is well told in first person by Zach. The beginning is a bit slower as the characters are developed with background history. I really liked the characters and hoped they would all survive. Zach provides an interesting philosophical perspective as the apocalypse becomes apparent. There is plenty of action once the plague takes over the population and as the team tries to escape to safety. The military detail is strong and there is good discussion of viral science.

I was glad to listen to this entry in a longer series. It sounds as though the stories are related but do not necessarily include connecting characters. I recommend this to readers who enjoy zombie stories. I won’t be rushing to get the next in this series, but I might pick up more if I am in the mood for more zombie stories.

Audio notes: R. C. Bray is a superb narrator whose skills add to the works he reads. He provides unique voices with fitting accents, making the characters more alive.