This is a fast moving, introduction to an engaging dystopian series. 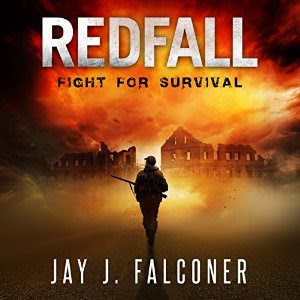 Publisher's Summary
Society will collapse in days...and that's the good news.
Former special ops and survivalist Simon Redfall has lost everything: his wife, his fortune, and his future. Despite being hunted by angry mobs and his own bankrupt government, Simon arrives in Washington, DC, to attend the first ever pay-per-view execution of someone he loves.
Then red storm clouds appear and begin to spread their potentially toxic rain across the planet.The mysterious weather phenomenon grounds all travelers, knocks out communications, and threatens to take down the grid, sending civilization back to the Stone Age.
As society tumbles into chaos, Simon joins a group of like-minded preppers to unlock the secrets behind a terrifying global conspiracy. What he and his band of freedom fighters soon learn will put their lives - and the lives of everyone else on the planet - at risk.
For humanity, time is running out.... When the red rain stops falling, it will be too late to stop what's coming next.
©2016 Jay J. Falconer (P)2016 Jay J. Falconer


Review:
Simon Redfall was a respected former special operative who established a successful security business, Ghost Works. The business went into bankruptcy and Simon went into hiding after his wife committed a terrorist act, massacring a group of visiting scientists and their families. Simon has been living off the grid for two years and only returned for his wife's execution which is a mega public extravaganza, legalized so it can be exploited to help raise money for government budget shortfalls.

Simon suffers quietly through his wife’s cries of innocence. When it is over he tries to slip away but reporters and angry citizens try to mob him. The only thing that stops them is red rain that comes from nowhere and distracts the mob long enough for Simon to be pulled into a van and whisked away.

Simon find himself with a team of teen-aged survivalists and geniuses who need his help in consulting and contacts, to unravel and deal with the society collapsing around them. They have a secure survival base called Pandora, located in Amish country. Tally Wicks, their leader, also has a brother, Wyatt, who has a more militant compound, Jericho, a few miles away. Wyatt wants the two groups to join forces and challenge the government, while Tally is looking for a logical, peaceful solution. But whether it is cyber rebellion or military rebellion it looks like the groups are going to face major technological trouble. Before it is fully revealed how Simon can help the teen group at Pandora, a militant force of some sort attacks the Jericho compound. It might be a competing gang group or something more sinister.

Between the scenes introducing Simon, Pandora and Jericho, readers meet the ‘nefarious’ characters. Zeke, sounds like a ‘clean up’ man for Indigo Technologies, the mega company that took over the security world when Simon’s business closed. Jeffrey Hansen is a scientist who founded Rain Tech. Although he provided covert weather technology for the government, his current project is a complete secret to everyone except his obscenely wealthy, contract employer.

The involved government parties include General Nate Rawlings, Director of National Intelligence, Nancy Wiggins, NSA Director, Conner Haskins, and a contract militia group, Nighthawk. There are quite a few threads moving along the story line and this first book hasn’t tied them all together yet. The independence of American society has been crumbling at the opening of this story. The red rain and manipulated events move the story into a scary dystopian world which is being controlled by technology in the hands of powerful, wealthy fanatics who have, as yet, undisclosed agendas.

I really like the elements of technology being used by the good guys and bad guys. I am interested in the dynamics between the youth and their aversion to the older generation. This first story moves quickly, setting up the political atmosphere, strong characters and a glimpse of the conflicts and action that will undoubtedly escalate. However, there are a lot of open questions and, as I was warned, the book stops in the middle of the action. The reader is left to choose to either walk away or move on to book 2, Redfall: Freedom Fighters. Since it was an “argh” moment for me, I want more.

Audio Notes: I really enjoyed the narration by Gary Tiedemann. He provides distinct character voices and includes solid emotional nuances. I would be glad to listen to more of his narration. The combination of talented narration and steady action made this an engaging listen.

Cautionary content: This book does contain violence and bloodshed consistent with a dystopian setting. It may also contains some foul language - that barely registered for me so it couldn't have been too glaring.


I received this audio from the author through Audiobook Blast for an honest review. It qualifies for my Audiobook Challenge and “R” in Alphabet Soup Challenge.
Posted by Martha Eskuchen at 9:50 PM