[** If you are new to Friday Pick Giveaway - Welcome!  Scroll down a bit (below book group #19) for instructions on how to enter.]

Happy Friday! Another week flies by. This one was cold! Thursday we woke up to 19 degrees and warmed to 39. Brrrr. My blood is too thin for this. I hope everyone is snuggly warm!

[UPDATED NOTE - US entrants I prefer, please, that you pick a book as that is the first purpose of this giveaway - to find new homes for books. The GCs are for the international entrants because postage has jumped up.]

Thank you to all who entered the January 2 Pick. There was one automatic win this week.  (Automatic winners are those who requested the book four times and I did not note other people asking for that book during those weeks.) There were three titles blocked but one was won.
Becky gets Never Say Never


CONGRATULATIONS
to Random.org picked Winners from January 2 Pick:
Sue F gets the Janet Evanovich Pair
Mariska gets a GC

Well, for me it is New Year, New Start, read Old Books from the TBR!!
Image found at Pinterest by Calcasieu Parish Libraries

PAIRS:
Lisa Gardner: Alone and Gone
Janet Evanovich: Eleven on Top and Twelve Sharp
Stuart Wood: L.A. Dead and Fresh Disasters
SINGLES:
Ender’s Shadow by Orson Scott Card - Tape Cassettes
New Blood by Gail Dayton
Except the Dying by Maureen Jennings
To Collar a Killer by Lee Charles Kelley
Dead I Well May Be by Adrian McKinty
‘Til There Was You by Elizabeth Ann Michaels
The Ladies’ Lunch by Patricia O’Brien
Wild Winds by Janelle Taylor
Shrink Rap by Robert B. Parker - Tape Cassettes
Rescue Me Anthology by Cherry Adair, Lora Leigh and Cindy Gerard 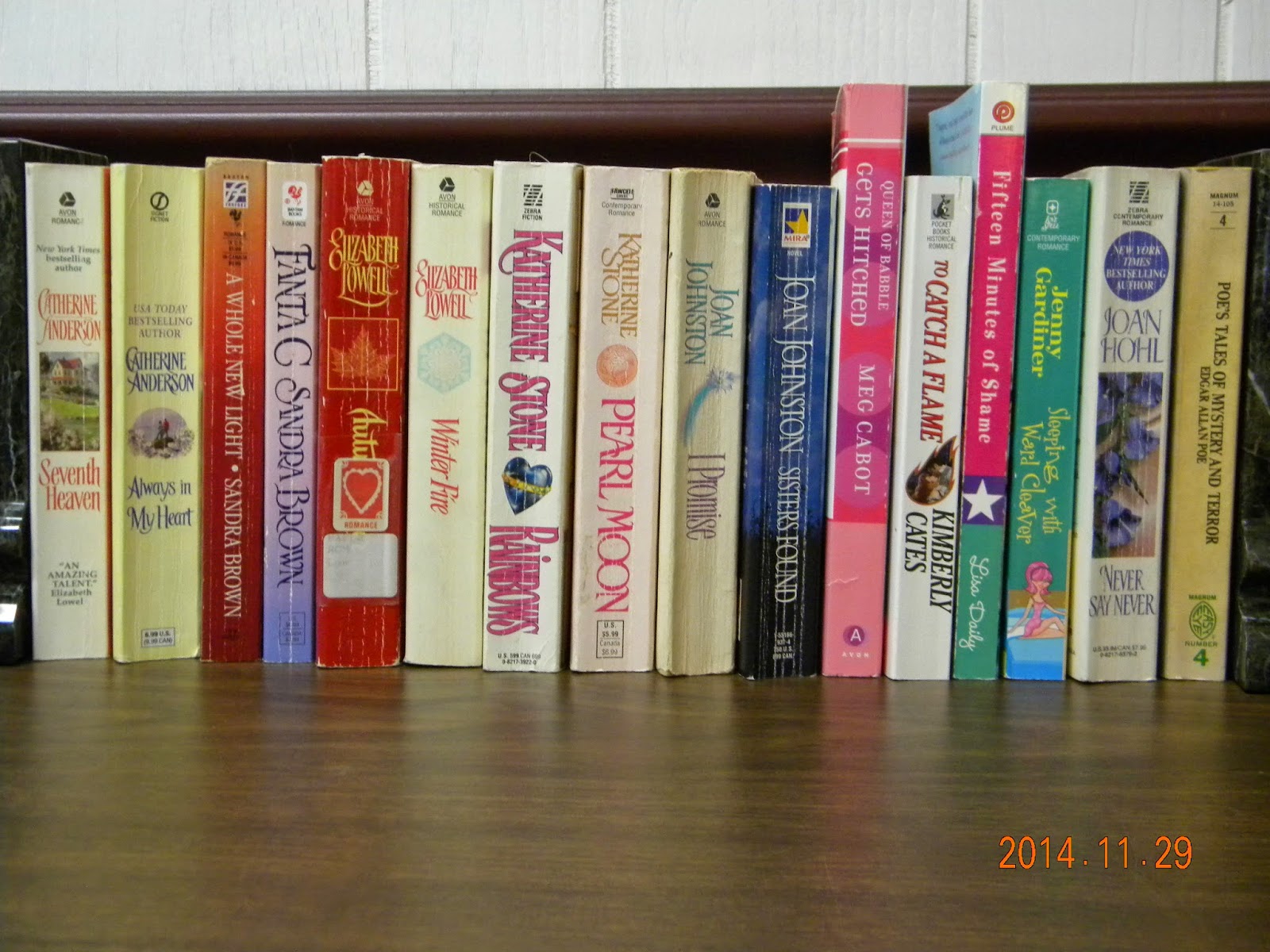 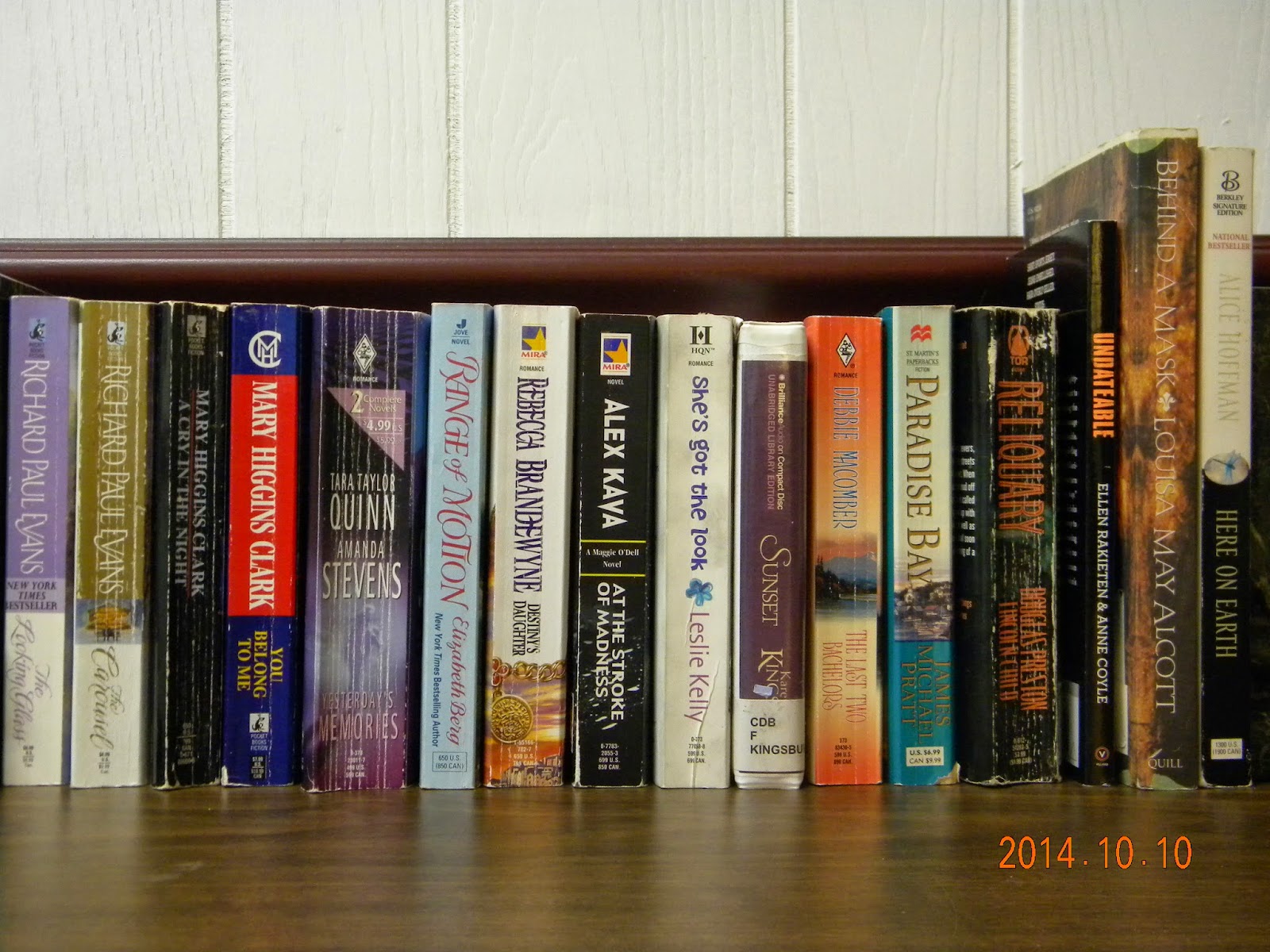 PAIRS:
Richard Paul Evans, The Looking Glass and The Carousel
SINGLES
Duo Book: Yesterday's Memories by Tara Taylor Quinn and Amanda Stevens
Range of Motion by Elizabeth Berg
At The Stroke of Madness by Alex Kava
Undateable by Ellen Rakieten & Anne Coyle
Behind a Mask by May Alcott
Here on Earth by Alice Hoffman 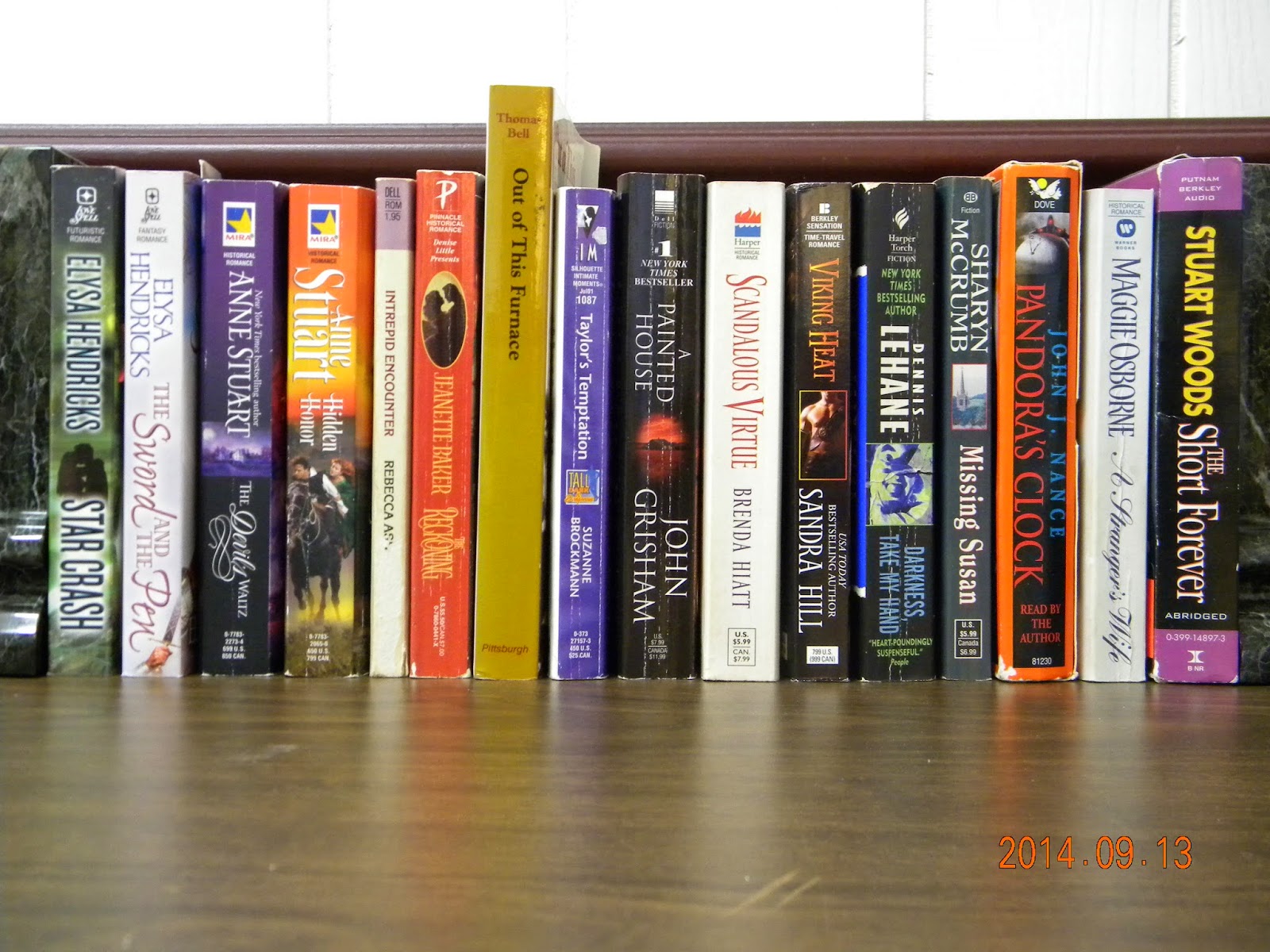 PAIRS:
Elysa Hendricks, Star Crash (personally autographed copy) and The Sword and the Pen
SINGLES:
Intrepid Encounter by Rebecca Ashley
The Reckoning by Jeanette Baker
Out of This Furnace: A Novel of Immigrant Labor in America by Thomas Bell Reprint Edition
Scandalous Virtue Mass by Brenda Hiatt
A Stranger's Wife by Maggie Osborne 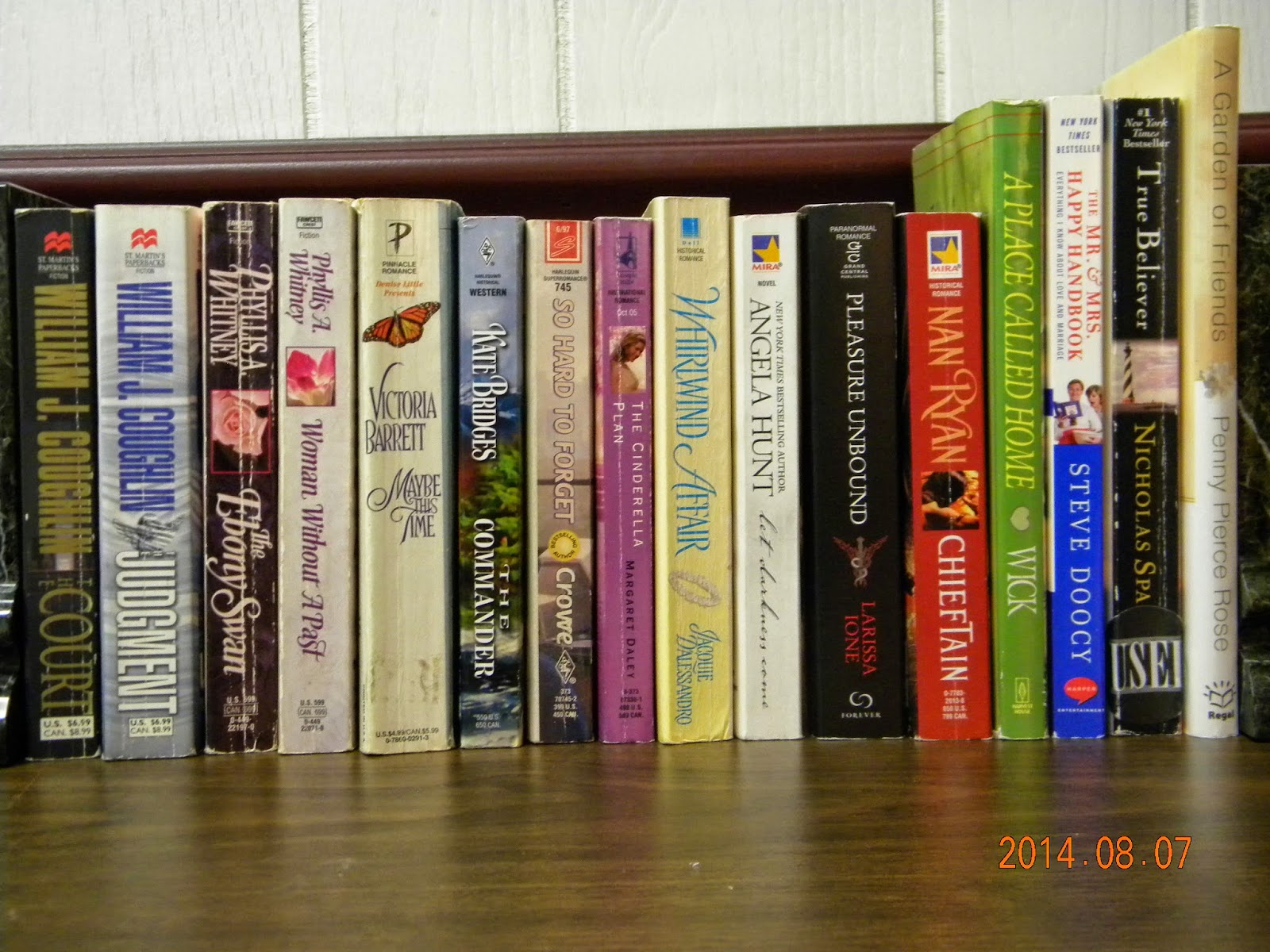 SINGLES:
Maybe This Time by Victoria Barrett
The Commander by Kate Bridges
The Cinderella Plan by Margaret Daley
The Mr. & Mrs. Happy Handbook by Steve Doocy
A Garden of Friends by Penny Pierce Rose 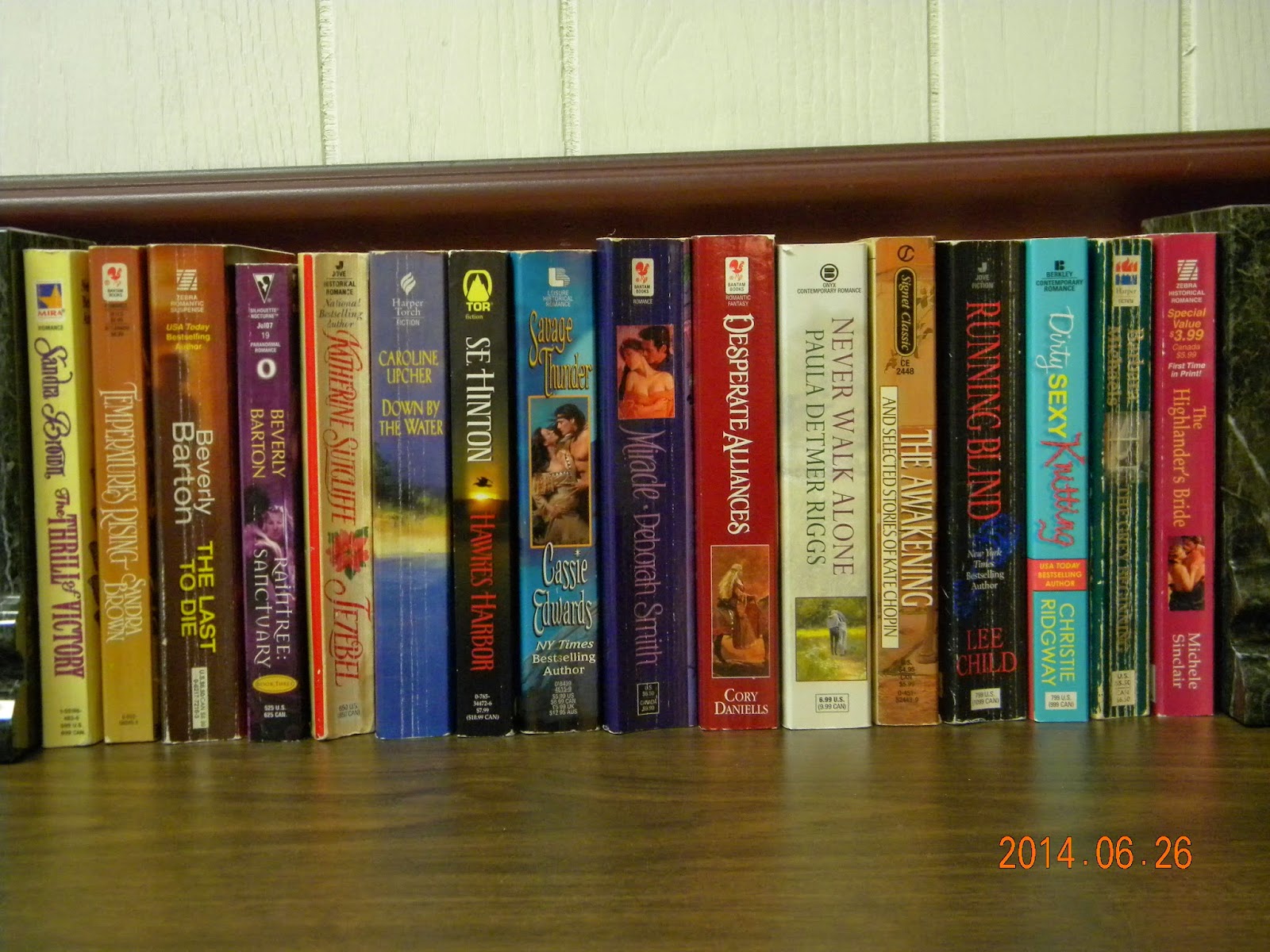 SINGLES:
Jezebel by Katherine Sutcliff
Down by the Water by Caroline Upcher
Miracle by Deborah Smith
The Awakening and Selected Short Stories by Kate Chopin

New Book Group #47 April 25, 2014
SINGLES:
Once Upon a Honeymoon by Julie Kistler
The Hidden Truth of Cytech's Randall Forty by Vickie Kennedy

New Book Group #37 March 22, 2013
Singles:
Anthology: Something Borrowed, Something Blue - this book has spine creases and minor water damage...I thought I had read it and liked it but now I realize it was another anthology I read with Elaine Barbier.

New Book Group #32 October 5, 2012
NOTE This book has dog bite damage; it is missing half back cover and the edges of pages in the back third of the book... it does not effect the text but I will understand if no one wants this one - A Courtesans Guide to Getting Your Man by Susan Donovan and Celeste Bradley

I have finally updated the intro and Entry paragraphs here:

I periodically update the lists - deleting those won. You can still go to the Friday Pick list link to see older posts and the older lists book pictures if you want! I am happy to say that so far about 754+ books have found new homes! YAY. I have to update my print out to check the exact number sent out - a few were never claimed.

I learned that The Book Depository does not ship to everywhere. The postage for some of the books to far away places runs between $5.00 $7.00 and $6.00 $10.00 and up. Since I would award $5.00 for The Book Depository to an international winner, as an alternative you may choose a smaller book and we will hope the postage will not exceed $6.00. If the postage is more, or if you want to pick a larger book and you are willing to pay any extra postage beyond the $6.00 I will work with you on that. This may not make a difference to many but if it helps one or two of you to give one of my books a home that will make me happy too. :o)


TO ENTER:
Leave a comment and tell me WHICH BOOK you would like to get from the Friday Pick lists.
CUT OFF TIME IS THURSDAY NIGHTS AT 10:00 PM CENTRAL so I do not have to stay up past midnight to do the winner post!
I will randomly pick two winners to announce Friday mornings with the next Pick post.
Automatic wins are those who requested the book four times and I did not note other people asking for that book during those weeks.
WINNERS PLEASE CHECK THE WIN POST ON FRIDAYS AND fill in the Winner's Acceptance Form or email me at mesreads@gmail.com. [I will confirm receipt of the addresses- well I realize I haven't always done this. But if you filled out the form and don't get the book within two weeks nudge me with an email please!] If I have the winners e-mail I will send a reminder in a week or so....

Thanks for helping these books find new homes!!

Pick #8---(All gone)
The Jury by Steve Martini - Audio Tapes