I loved the conflicted characters in this enchanting historical romance!

Only Enchanting, A Survivors' Club Novel
by Mary Balogh 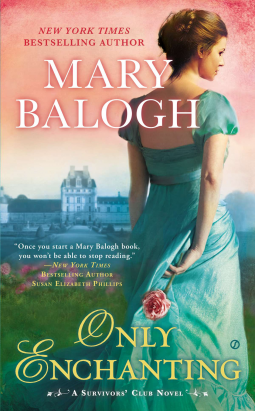 Book Description
Publication Date: October 28, 2014
The Survivors' Club: Six men and one woman, all wounded in the Napoleonic Wars, their friendship forged during their recovery at Penderris Hall in Cornwall. Now, in the fourth novel of the Survivors' Club series, Flavian, Viscount Ponsonby, has left this refuge to find his own salvation—in the love of a most unsuspecting woman.…

Flavian, Viscount Ponsonby, was devastated by his fiancée’s desertion after his return home. Now the woman who broke his heart is back—and everyone is eager to revive their engagement. Except Flavian, who, in a panic, runs straight into the arms of a most sensible yet enchanting young woman.

Agnes Keeping has never been in love—and never wishes to be. But then she meets the charismatic Flavian, and suddenly Agnes falls so foolishly and so deeply that she agrees to his impetuous proposal of marriage.

When Agnes discovers that the proposal is only to avenge his former love, she’s determined to flee. But Flavian has no intention of letting his new bride go, especially now that he too has fallen so passionately and so unexpectedly in love.


Review:
Agnes was content with her first marriage which was a practical arrangement with an older neighbor. Now she is content as a widow living in the country with her unmarried, older sister. She attends a dance at the home of her friend and is delighted to dance, not once but twice, with the gorgeous, charismatic, and rather enigmatic Viscount Ponsonby. Agnes is completely smitten but accepts that she will never see him again. Flavian returns to the community six months later and, to Agnes’ consternation, he not only flirts with her but proposes to her. She is confused and afraid to risk the passion she fears may be involved in their relationship.

Flavian is one of the Survivor’s Club. His head wounds left him with memory lapses and rages. He had to relearn even how to speak and he still stutters a bit. That doesn’t stop the ladies from flocking after him. Yet he struggles with memories of his childhood sweetheart, Velma, who broke their engagement when he was injured and married his good friend instead. His friend has died and Flavian's mother, sister and others are clearly planning on bringing him back together with Velma. Instead, Flavian finds Agnes to be ‘enchanting”, sensible and "safe"...promising a place of peace amid his tumultuous mind.

Agnes accepts Flavian’s rather sudden and not so romantic proposal. They are married quickly with their Survivor’s Club friends as witnesses. But they will still have to face the daunting task of meeting their parents and introducing Agnes to the ton.  Rumors threaten some scandal which makes it even more difficult for the pair to reluctantly share their secrets, learn to trust and accept their own growing feelings.

I always enjoy the warm characters that Mary Balogh creates. There is a charming range of natural emotions from fear and sorrow, to joy...and of course, love. The conflict in the human drama is appropriate to the time period and setting and allows for an engaging romance that grows from only enchanting to something much richer. The writing flows beautifully for a lovely reading experience. I highly recommend this series to readers who love historical romance. Ms. Balogh is a favorite author for me and a ‘must read’ author in this genre.


I received this title from the publisher through NetGalley. This will qualify for my NetGalley Challenge, TBR Double Dare and Alphabet Soup Challenge.
Posted by Martha Eskuchen at 8:04 PM