I was quickly re-engaged after not listening to a book in this series for several years. 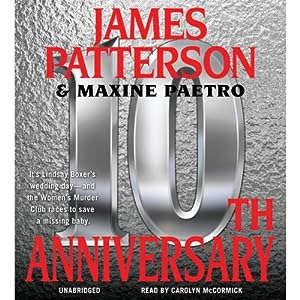 
Publisher's Summary
For every secret....
Detective Lindsay Boxer's long-awaited wedding celebration becomes a distant memory when she is called to investigate a horrendous crime: a badly injured teenage girl is left for dead, and her newborn baby is nowhere to be found. Lindsay discovers that not only is there no trace of the criminals - but that the victim may be keeping secrets as well.
For every lie....
At the same time, Assistant District Attorney Yuki Castellano is prosecuting the biggest case of her life - a woman who has been accused of murdering her husband in front of her two young children. Yuki's career rests on a guilty verdict, so when Lindsay finds evidence that could save the defendant, she is forced to choose. Should she trust her best friend or follow her instinct?
There's a different way to die....
Lindsay's every move is watched by her new boss, Lieutenant Jackson Brady, and when the pressure to find the baby begins interfering with her new marriage to Joe, she wonders if she'll ever be able to start a family.
With James Patterson's white-hot speed and unquenchable action, 10th Anniversary is the most deliciously chilling Women's Murder Club book ever.
Crack another case with the Women's Murder Club.
©2011 James Patterson, Maxine Paetro (P)2011 Hachette


Review:
This installment covers three separate subplots. Lindsey is assigned to try to find the missing baby of a mixed-up, rebellious fifteen year old girl. Lindsey doesn’t have time for the teen’s careless attitude and changing story if she wants to find the baby alive.

Meanwhile Yuki is facing another major criminal case as she tries to prove a well-respected doctor of murdering her openly, philandering husband. All the evidence seems to be in order until the defense attorney pulls Lindsey into a meeting with the accused who insists on her innocence. There are a few investigative details to raise reasonable doubt in Lindsey’s mind and have her looking at the case in spite of her new boss’s orders to leave it alone.

The third story plot involves Cindy as she pushes to keep on top of the crime beat while another journalist and cut backs threaten her position. Cindy has stumbled upon a story of a woman who has awakened after losing a night of memory. Then two more women come to the hospital with similar stories. It appears the women have been snatched from their lives, drugged, raped, and then dumped back near their homes or nearby alleyways. Cindy has followed the one clue to make inquiries for a particular marked taxi-cab. Late and caught in the rain a few days later she doesn’t think of the danger when she calls that cab company for help.

It has been a couple of years since I last read or listened to a book in this series. This was like coming back to old friends. There was an easier tone in this story than some of the more suspenseful ones but it was good. I liked the three different plotlines that kept interest and connection between the women. I won’t let so much time pass before listening to the next in line as I enjoyed the easy camaraderie of the ladies and their love interests as well as the mysteries that were pursued.

Audio Notes: The narration by Carolyn McCormick was familiar, comfortable and engaging. I enjoying listening to this series on audio as the books flow well and the characters are easy to distinguish.


I selected this from my Audible Library as my TBR book for October.
Posted by Martha Eskuchen at 11:30 AM