This is a very engaging and delightful “gaslight” steampunk romance mystery! 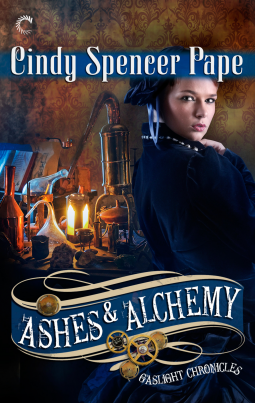 Book Description
Publication Date: January 6, 2014
A Gaslight Chronicles novella
London, 1860
Police inspector Sebastian Brown served Queen and country in India before returning to England to investigate supernatural crimes alongside the Order of the Round Table. If his wifeless, childless life feels a little empty sometimes, that's not too great a price to pay in the name of duty.

Minerva Shaw is desperately seeking a doctor when she mistakenly lands on Sebastian's doorstep. Her daughter Ivy has fallen gravely ill with a mysterious illness—the same illness, it seems, that's responsible for taking the lives of many of Ivy's classmates.

Seb sniffs a case, and taking in Minnie and Ivy seems the only way to protect them while he solves it. But as mother and daughter work their way into his heart and Seb uses every magickal and technological resource he can muster to uncover the source of the deadly plague, it's he who will need protecting—from emotions he'd thought buried long ago.


Review:
Minnie is struggling through the snow storm and smoke poisoned air to find a doctor to help her daughter, Ivy. She stumbles at a door that is her last resort. Police inspector Seb hears a thud and opens his door to find a small figure fallen on his doorstep. He takes her in and discovers that she is seeking the doctor who lives next door. Seb decides to step in and help by taking Minnie back to her “project” apartment to pick up Ivy.

They discovered the place had been ransacked and Minnie’s friend and sitter has been murdered.
Fortunately they found Ivy hidden away. Now Seb’s interest is really picqued and he decides that Minnie and Ivy will be safest with him while they investigate the murder and the mysterious illness that has Ivy sweating out what looks like black soot.

Seb has an unusual team of investigators to call upon for help - the Order of the Round Table. These are people with special, supernatural skills: enhanced smell, sight and healing touches as well as ability to detect lies, auras and more. His friends are more than happy to add their efforts to find the villain who has been experimenting on young children from a poverty level grade school. The team also suspects that Ivy may have some super ability herself.

I really enjoyed Minnie as a tough, determined character. Though single she ‘adopted’ infant Ivy to raise as her own when her mother, another friend, died.  Minnie couldn’t be anymore fierce and protective than a natural, loving mother. I also loved Seb who is a quite determined investigator who has grown accustomed to his aloneness in life but has buried dreams of family. These two make a wonderful pair in this quick novella that gives a good feel for other characters in the series. There is mystery, suspense, steampunk elements and of course, sweet romance! I definitely want to read more in the series and recommend this to others who like mystery and romance, with or without steampunk.


I selected this through NetGalley to review for Carina Press.
Posted by Martha Eskuchen at 6:06 PM