Book Review and Giveaway: The Furnace (The Tanner Sequence) by Timothy S. Johnston

This is an intense mystery in an interesting and dangerous sci fi setting.

The Furnace (The Tanner Sequence)
by Timothy S. Johnston 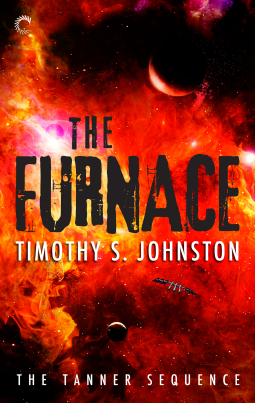 Kyle Tanner is about to die. Alone, floating in a vacsuit only a few million kilometers from a massive, uncaring sun, he has barely enough time or juice to get out a distress signal before either his oxygen runs out or he succumbs to the radiation.

When the CCF sent investigator Kyle Tanner to SOLEX One, a solar energy harvester past Mercury, he thought it would be an open-and-shut murder case. A crew member was found dead, minus his head and hands. Not the worst Tanner has ever seen, but the deeper he delves, the more nightmarish it becomes. A shadowy figure, bleeding from his hands, assaults Tanner in his quarters. Then two more turn up dead, missing their heads and hands as well.

With no one to trust and everyone a suspect—even the intriguing chief engineer, Shaheen—Tanner must navigate a crew on the brink of madness to uncover a conspiracy that could threaten the whole of the human race. Even if it means making the ultimate sacrifice…


Review:
This sci fi mystery grabs you from the opening as the protagonist investigator, Kyle Tanner, is drifting in space and dictating the report of how the murders and deaths occurred - including his own. Kyle sets up some background explaining his role as a reluctantly famous homicide investigator and enforcer. He continues explaining his assignment from Mercury to investigate a suspicious death on a far off space station known as SOLEX One. The space station, beyond Mercury and close to the sun, houses a small crew with four scientists who are studying and harvesting solar energy while all hoping they stay shielded from the risk of radiation.

The death Kyle is to investigate could have been an accident except for the bizarre fact that someone cut off and disposed of the head and hands post-mortem. Kyle begins his methodical interviews which clearly trigger a problem as he discovers when he is attacked in his cabin. Soon two more bodies are found, missing their heads and hands, and Kyle knows there is foul play afoot.

Everyone at SOLEX is a suspect until Kyle can uncover clues for motive and opportunity. Along the way he begins to form an attachment with the uniquely beautiful and brilliant chief engineer, Shaleen. Piece by piece he pulls together evidence that reveals a devastatingly dangerous plot of revenge. Shaleen is able to help with computer details as well as survival functions as the station suffers sabotage - not only at the hands of the murderer but by Kyle himself trying to trap the killer.

I really like Kyle as a no-nonsense investigator and it is interesting to watch as he purposefully decides that maybe he can stretch his life, and emotions, to include another person, Shaleen. The conspiracy plot is wonderfully diabolical and frightening as a bio-engineered assassination plan goes out of control.

The story is well written and engaging. The technicalities of the scientific elements are sufficiently explained to make it understandable to non-scientific readers. The author even supplies diagrams of the Station to help orient the activities during the investigation. Although the killing and decapitation is macabre, this is definitely a twisted mystery, not a horror story. I highly recommend this to those who love a good homicide investigation story.


I selected this book from NetGalley for review.
ENTER THE GIVEAWAY: The author contacted me and has generously offered an ebook copy of this sci fi mystery for Giveaway as well as five signed covers!

ENTRY FORM HERE
Don't forget to fill in the form for entry!
I have noticed a few commenters who forgot to enter through the Form.
For 3 Extra Bonus entries comment on the review OR
visit the author's website and tell me something you like/learned there.