Another great installment in this romantic suspense series!


Ruthless
by Debra Webb
The Faces of Evil Series: Book 6 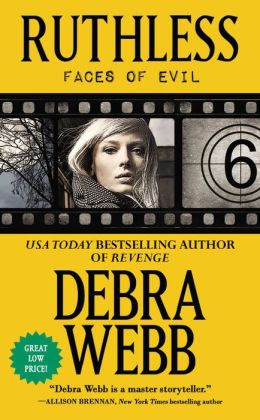 Book Description
Publication Date: August 27, 2013
"Gritty, edge-of-your-seat, white-knuckle thriller . . . Move over Jack Reacher-Jess Harris is comin' to town."
He has a ruthless past . . .
Three photos of three unknown women. Sent to Deputy Chief Jess Harris by the Player, one of the world's most sadistic killers. The Player is taunting her, and Jess is more than ready to take on his challenge. Only one thing could distract her from the Player's deadly game: the appearance of a clue to long-unsolved cases. For years Birmingham's children were vanishing-one per year, always on a full moon-until the disappearances stopped and the Man in the Moon case went cold. No leads on the children were ever found-until now.
Jess has no choice but to pursue the case. Someone is reaching out to her, sending her mementos of the missing children, and the citizens of Birmingham deserve justice. But after years of silence, has the Man in the Moon really resurfaced? Or is he just another pawn in the Player's game?


Review:
Tough Chief Deputy, Jess Harris, is still being taunted by her old nemesis, the serial killer Spears.  Now he has sent her pictures of three women challenging her to find and save them. Although the case is being handled by the FBI and Chief Black in her office, it still causes concern to Jess and her boss and lover, Captain Dan Burnett.

Matters are more complicated when another killer from the past begins to send packages to Jess. This killer was known as the Man in the Moon who had spent many years snatching and killing one young child each harvest moon.  He had stopped ten or so years before but now he is sending the packages of the children to Jess. She realizes that something has triggered the killer and she is determined to solve the mystery before it becomes more than unearthing prior victims.

As if work problems were not enough of a challenge, Jess has the stress of wondering if she might be pregnant. Although she is still fiercely independent, she is beginning to appreciate Dan’s concern for her well being and his need to try to protect her from two maniacal killers as well as the possible threat from another cop who is still missing.

I really enjoyed the plot and intensity of this story and I appreciate that there is no offensive language.  There is a bit of conflict and romance for Jess’s coworkers, Harper and Lori, that adds extra elements. There are a few romantic scenes for Jess and Dan but primarily this book focuses on the murder and suspense elements which kept me turning pages to discover the secrets!

This is Book 6 of the series which I started at Book 3. It could be read as a stand alone but I recommend getting the earlier books so you can enjoy the character interactions better. I will be anxious to keep reading this excellent romantic suspense series.


I received this ARC for review for Forever/Hachette.
ENTER THIS GIVEAWAY for the ARC Copy:

* This contest is open to those with US or Canadian address.
* This contest will close 10 PM (Central) on September 13, 2013.
The winner will be randomly selected from all entries.
WINNER WILL BE ANNOUNCED on September 14, 2013.
Winners will have 72 hours to respond by email or the winners form linked in the announcement.
Posted by Martha Eskuchen at 5:00 AM