This is a really fun listen -- action packed adventure, danger and a little romance too! 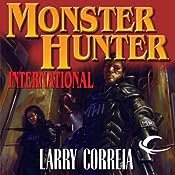 
Publisher's Summary
Five days after Owen Zastava Pitt pushed his insufferable boss out of a 14th story window, he woke up in the hospital with a scarred face, an unbelievable memory, and a job offer.
It turns out that monsters are real. All the things from myth, legend, and B-movies are out there, waiting in the shadows. Officially secret, some of them are evil, and some are just hungry. On the other side are the people who kill monsters for a living. Monster Hunter International is the premier eradication company in the business. And now Owen is their newest recruit.
It's actually a pretty sweet gig, except for one little problem. An ancient entity known as the Cursed One has returned to settle a centuries-old vendetta. Should the Cursed One succeed, it means the end of the world, and MHI is the only thing standing in his way.
With the clock ticking towards Armageddon, Owen finds himself trapped between legions of undead minions, belligerent federal agents, a cryptic ghost who has taken up residence inside his head, and the cursed family of the woman he loves. Business is good.... Welcome to Monster Hunter International.
©2009 Larry Correia (P)2011 Audible, Inc.


Review:
Owen Zastava Pitt is a big young man with a fascination with guns. His father was a military hero who pushed him hard. Owen worked as a bouncer to help put himself through college. When his temper got him into trouble Owen decided to find the most unexciting career he could so he became a boring accountant. One night he discovered that his boss was not only insufferably mean but a monster - literally! Somehow, with the help of his brawn, smarts and hidden gun, Owen was able to survive a vicious attack by pushing his boss, now werewolf, out of the 14th story window.

Thus Owen learned there were monsters in the world and he caught the attention of a special division of the FBI and Monster Hunters International. Both organizations were impressed with his natural abilities and they offered him a job. Not wanting to work with the government, Owen accepts the job at Monster Hunters International. In truth, he is more drawn to that job because one of the recruiters is a young woman, Julie, with whom he is immediately smitten.  She is beautiful and the granddaughter of the CEO of the business.  Owen knows, with his scarred face and bulky physique, he doesn’t stand a chance with her. Besides, she has a rich, handsome, arrogant, hunter boyfriend, who immediately becomes Owen’s rival.

Owen goes through training making friends of other recruits and some of the teachers. Many will fail the training process but when they are done there is a hard core group of “newbies” ready to face the hidden monsters in the world. A major threat arises and the newbie team is brought along with the experienced crew to face the threat.

As though it’s not bad enough facing the monsters in battle,  Owen is dreaming about them and getting dream visits from an old man who tells Owen he has to prepare to face the Cursed One who seeks to control time and open the portals of evil. Owen even gets to see past memories of the Cursed One in all their evil goriness. The team races to locate and stop a band of master vampires and the strongest of monsters.

There are many strange hunter alliances, strong action, a little romance and plenty of snarkiness that makes this great fun. The author builds a good rapport with the characters so that I really liked the various team members. There were a few twists and moments when I laughed and others when I gasped.

Audio Notes: The narrator does a great job projecting the personalities of the characters, both good and evil. The reading definitely enhanced the fun of the book for me.


I had this one on my MP3 from my Audible Library. It is my Just For Fun reading for September.
Posted by Martha Eskuchen at 2:10 PM