This is a marvelous dark fairy tale, reminding the reader that not all fairy tales have a happy ever-after ending.
Nevermore: A Novel of Love, Loss & Edgar Allan Poe
by David Nail Wilson
Narrated by Gigi Shane 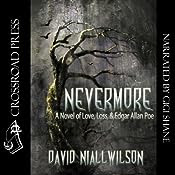 Publisher's Summary
On the banks of Lake Drummond, on the edge of the Great Dismal Swamp, there is a tree in the shape of a woman.

One dark, moonlit night, two artists met at the Lake Drummond Hotel, built directly on the borderline of North Carolina and Virginia. One was a young woman with the ability to see spirits trapped in trees and stone, anchored to the earth beyond their years. Her gift was to draw them, and then to set them free. The other was a dark man, haunted by dreams and visions that brought him stories of sadness and pain, trapped in a life between the powers he sensed all around him and a mundane existence attended by failure. They were Eleanore MacReady, Lenore, to her friends, and a young poet named Edgar Allan Poe, who traveled with a crow that was his secret, and almost constant companion, a bird named Grimm for the talented brothers of fairy-tale fame.

Their meeting drew them together in vision, and legend, and pitted their strange powers and quick minds against the depths of the Dismal Swamp itself, ancient legends, and time.


Review:
A young woman, Lenore, has a unique and special, mystical, artistic skill. Lenore is able to sketch and release spirits trapped in objects, in this case, trapped in the trees. She has been drawn to an off the beaten path hotel on the borderline of Virginia and North Carolina. Nearby is a swamp and a Lake with legendary trees that resemble living creatures. One tree is shaped like a grand stag and another is shaped like a woman. There are local legends but no one really knows the story -- except perhaps the mysterious, ancient woman who lives in the swamp.

Lenore strike up a friendship with the man in the room next door, Edgar Poe, who travels with his faithful companion, a crow named Grimm. Edgar struggles with his dark writing as he despairs the imminent loss of his ailing wife. Lenore continues her work with intense focus while Edgar weaves a strange story of a sorceress who seeks dark power through capturing a child princess. Suddenly it appears that the artists’ skills are changing time, history and reforming reality.

A young waitress and a young boy at the Inn agree to help Lenore and Edgar on their separate adventures into the swamp. Edgar and Lenore part, agreeing that they will meet again after they have completed their missions. But their destinies soon cross again as Edgar races to stop Lenore when he realizes that the woman Lenore is about to release from the trees could bring disaster, not only to the swamp, but to Lenore herself.

This is a haunting story; beautiful in its presentation, even though dark. The author manages to convey a Southern gentility in the primary characters and a dark malevolence in the evil character. The pacing moves well with the building mystery leading to the danger and action.  I love how the author uses Edgar Allan Poe as a character along with several of the famous poet’s characters such as Lenore and the raven. When I was finishing the story I was compelled to pull out a copy of The Raven to re-read in light of this fairy tale.  I recommend this to any reader who likes Poe and any listener who wants an engaging, quick listen.

Audio Notes: This was a wonderful narration and made for several hours of engaging listening. Gigi Shane does an excellent job of conveying the Southern tone and the haunting danger. I enjoyed listening to the smooth delivery as I anticipated discovering what would happen.


I received this audio book from the Author through Audiobook Jukebox to provide an honest review.
Posted by Martha Eskuchen at 5:01 PM