Book Review: Rise of the Fire Tamer by Kailin Gow

This is a delightful story with the bonus of a fun way to learn words and their meanings!
Rise of the Fire Tamer (The Wordwick Games #1) (An SAT Prep Dystopian Fiction)
by Kailin Gow

Book Description
Publication Date: March 31, 2011
After winning a contest for a popular game called Wordwick Games, five teens Gemma, Sparks, Rio, Kat, and Jack, are invited to stay at Wordwick Games inventor Henry Word's mysterious castle and play the newest level of Workwick Games. Little do they know, the castle is the doorway to a wondrous world call Anachronia where words can be used as weapons, power, and commodity. There is unrest in Anachronia, and if the five teens can follow the rules of Wordwick Games and prove to be the best player, one of them will be crowned Ruler of Anachronia. Official Book Trailer at: youtube.com/watch?v=COc3-8c_hnM&NR=1


Review:
Five teens who are unique and different win a contest in a computer game called Wordwick Games. The prize is to stay at the castle of the game’s inventor where they are invited to play the next level of the game, a world called Anachronia.

Gemma is the rich, private school, grade A student from Manhattan. She is observant, calm and a negotiator. Sparks is the young cowboy and football quarterback - strong, rugged and honorable. Rio has been raised in poor conditions in LA making him tough. He is dark, handsome and suspicious of others. Kat is the young, impetuous Goth wannabee from London, and Jack is the red-headed, bespeckled historian geek from Alaska. Each brings certain skills to the Games.

They are told by their host that their goal will be to win the crown of the kingdom. Although they can work together, only one can win the crown and that person must meet three specific criteria. They go to there rooms and find “game pods”. Instead of going to bed they each enter the pod and soon find themselves in the world of Anachronia.  There they learn about the two warring factions, The Perfidious and The Spurious tribes. They must face dangers like the dragon in the Wickedly Woods. They have been told that words have special powers as tools and weapons and Ruler Words. The group will deal with betrayal, strange friendships and personal jealousies while they work toward their goal.

Words and definitions are liberally used throughout the story, including a Troll who challenges the teens to recognize words and meanings in order to pass his gate. I love words and totally enjoyed how they were woven into this fine adventure story.  The plot is fun on its own but made even more fun by knowing that the SAT words could be learned by readers.

Ms. Gow does a good job developing the distinct, and life-like characters. The teens often act like teens but they are on the verge of adulthood and you can see some maturity as the story progresses. There are rivalries for Gem's attention and the touches of romance are consistent with teenage infatuations. Through the obstacles the group overcome there are some good morals imparted for young people to gain some wisdom if their minds are open to it.

If you are a lover of words and light, fantasy adventure you would enjoy this book. I would definitely like to read the sequels.


Jack was still trying a few of the words, and trying not to jump every time he did. The idea that they had that much power seemed like a lot of responsibility. If it would help them survive here though...   Location 1373.

I received this book from the author for an honest review as part of Book Blast Tour.  Check out the GIVEAWAY LINK in the BookBlast Promo Post. 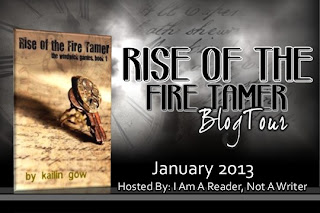