This story is full of action and character struggles! 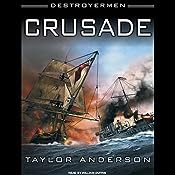 Also available in print and ebook formats.
Genre: Science Fiction
My Rating: 4.5 of 5.0


Publisher's Summary
Lieutenant Commander Matthew Reddy, along with the men and women of the USS Walker, have chosen sides in a war not of their making. They have allied with the Lemurians - a mammalian race whose peaceful existence is under attack from the warlike, reptilian Grik.

The Lemurians are vastly outnumbered and ignorant of warfare, and even the guns and technology of Walker cannot turn the tide of battle. Luckily, they are not alone. Reddy finally finds Mahan, the other destroyer that passed through the rift. Together, the two American ships will teach the Lemurians to fight and stand against the bloodthirsty Grik - or so they think.

For there is another vessel that does not belong on these strange seas - the massive Japanese battle cruiser Amagi, the very ship that Walker was fleeing from when the rift took them. Like Mahan, it followed them through. And now Amagi is in the hands of the Grik.

Battle stations! Listen to more in the Destroyermen series.


Review:
This is book two of the Destroyerman series. In book one, Into the Storm, Destroyermen, two American destroyers, Walker and Mahan, are limping away from a powerful Japanese war ship, the Amagi, during World War II when a Pacific storm whisks them into a parallel universe. They are separated and the first story focuses on Walker and her crew as they encounter new species: the friendly cat-like Lemurians, who are farmers and fishermen and the ugly, reptilian (dinosaur-like) Grik, who are clearly a barbaric foe.

This second book expands on the personalities and relationships of the Americans and their Lemurian allies who they are training to fight and resist the attacks of the Grik. There are several cities and factions of the Lemurians to cope with. Young but fiercely brave Queen Moran of the Bibadans is one of the first to recognize the leadership of Captain Reddy and the need to take an aggressive stand. Unfortunately the neighboring tribe city of Arial is led by a cowardly King and a sniveling Prince who would betray a temporary alliance.  This causes civil war with the mature head of the army, Lord Rollack, joining forces with Queen Moran and the Americans to force back a Grik attack.

There are plenty of personal stories and drama to engage the reader in the characters. Sinji is a Japanese Lieutenant who has become part of the crew on Walker, as has a young Jac, who sees himself as a Destoryerman now, no longer a Lemurian sailor. The teams, American and Lemurian, have discovered that their vessels are more than just ships; they have become homes to the officers and crews. The story is rich with actions of individuals, some brave and some despicable. There is racial prejudice and discipline to deal with. There are strategy plans, vibrant battles, betrayal, dishonor and sacrifice. Well into this story it is discovered that the more powerful Japanese ship, the Amagi, has also been pulled into this alternate world. Its crazed Captain is seeking revenge against the Americans and has allied with the Grik. The Captain has no regard for innocents to the dismay of his second in command.

I am invested in the characters and am apt to hold my breath at times of betrayal and danger. If you like a story full of personal interaction, some military strategy and plenty of action I highly recommend this series.

Audio Notes: William Dufris does an excellent job keeping up the pace, presenting the characters and conveying the tension to bring the story alive. I am definitely looking forward to listening to the rest of the series!

Captain Reddy discusses the reason for war with Adar, a Lemurian leader and philosopher:


Captain Reddy:  "Why we fight - it's fight or die. You might die if you fight, but you will die if you don't."
Adar: "Looking at it like that, the war isn't an excuse; it's a blessing. A chance for survival."

I purchased this some months ago and listened to it from my Audible TBR shelf.
This was my April Just for fun/from the TBR shelf book and I will add it to my Audio Challenge list.