This is a delightfully warm and engaging Historical Romance complete with battles, intrigue and, of course, romance. 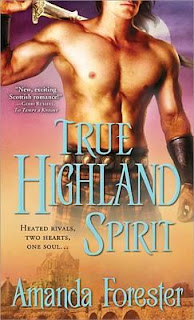 Product Description
A HEATED RIVALRY...
Morrigan McNab is a Highland lady, robbed of her birthright and with no choice but to fight alongside her brothers to protect their impoverished clan. When she encounters Sir Jacques Dragonet, she discovers her fiercest opponent...

IS GETTING EVEN HOTTER...
Sir Jacques Dragonet will give his life to defend Scotland from the English. He can't stop himself from admiring the beautiful Highland lass who wields her weapons as skillfully as he does, and endangers his heart even more than his life...


Review:
This was quite an enjoyable read.
Morrigan has been dressing as a boy and fighting along side of her brothers for many years. She rejected the arranged marriage to a wealthy but much older and brutish man by threatening him with a sword.  When she realized the loss to her clan by her failure to due her duty, she set out to replace the money by participating in thievery. As a young woman, she sees other ladies, like her new sister in law setting up a comfortable home. She doesn’t expect she will ever have desires for a husband and home like that. Then she meets Jacques.

Sir Jacques first appears as a minstrel when Morrigan and her “crew” ambush a group of wealthy men. He stands back from the ruckus and one of Morrigan’s brothers claim that he can visit the McNabs and they will escort him to their lands. Jacques discovers Morrigan alone and realizes that she is a female, not a lad. They share a kiss but he is afraid he has offended her.

Jacques is much more that he reveals. Morrigan and Jacques are in circumstances the keep putting them together. Although he admires Morrigan’s spirit and is drawn to her, he knows he can never pursue her. His secrets will always keep them apart - not only the secret of why he is in Scotland, but also the secret of who he really is.

When Morrigan finally learns that Jacques is a knight, a spy and more, she realizes that they are enemies searching for the same treasure for different reasons. She also has to accept that they cannot have a future even though she is determined to have a least a night with him.

I really enjoyed the light, easy going relationship between the couple. There is plenty of action and political and church intrigue and betrayal. The romance is sweet and warm. The story moved very quickly and I easily finished it in two days. I loved that the author was able to share a salvation message in the secular story.

This has humor, a warm romance, intrigue, action and a fine message. What’s not to like? I recommend this especially to all the historical romance fans.


Yet Morrigan slipped past his defenses like his mercy giver blade sliced through gaps in armor, leaving a man dead. Location 624.


So close, and yet a barrier loomed between them. Lovers and enemies. Location 2366.

A big "Thanks" to the author and Sourcebooks for this enjoyable book to read and review.
I will add this to my ARC challenge list.
Don't miss the author's guest post and giveaway in the next post!
Posted by Martha Eskuchen at 6:30 AM