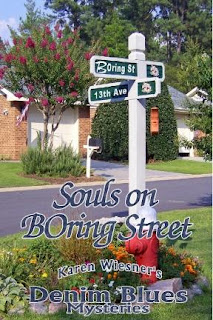 Product Description
Erin Shanley, a hospice nurse, turns amateur sleuth when she realizes that some of her patients are being swindled out of their life savings by the new “psychic” fortunetellers in Briar’s Point. She confides in her neighbor, Detective Tyler Shaw, whom she grew up alongside and considers her best friend.

Tough guy Ty has been in love with Erin since their disastrous first attempt at a romantic relationship when they were teenagers. Erin has been skittish about love since she discovered her father was cheating on her mother—and Ty is so much like her father. How can she risk loving a reckless, restless adventurer when her mother’s loyalty to a man like that brought her so much pain? But when Erin’s bumbling sleuthing attempts arouse someone’s wrath, she realizes her heart isn’t the only thing in danger.

Review:
Erin is a caring, nurturing person both at home and in her work. She is a homemaker who cans fruits and vegetables from her own garden, cooks wonderful meals and stays close to home with her two younger sisters. At work she is a warm compassionate hospice nurse.

Erin and her neighbor, Ty, were sweethearts in high school. But she felt betrayed because Ty and his family knew of her father’s infidelities but they didn’t tell Erin or her mother. Erin hasn’t forgiven her father and doesn’t trust any man, including Ty.

Ty grew up with restless parents who were eager to go off to the woods to hunt. Ty does enjoy hunting but he loves to be home and views Erin as the perfect homemaker.  Although Ty made a mistake getting involved with the wrong woman when in his early twenties, he has since realized that the only woman he wants is Erin.  He is a steady and reliable police detective and a good neighbor who helps Erin and her sisters whenever he can.  He wants to do whatever is necessary to prove to Erin that he is not like her father.

Erin allows her life to be controlled, almost consumed, by worry and fear. She is distressed when a couple move into a vacant house on the block and put out a sign that they are spiritualists and fortunetellers.  One of Erin’s patients thinks that her jewelry has been stolen. When Erin and Ty discuss the investigation they realize that the spiritualists are visiting the elderly patients and getting them to sign over assets.

I really liked Ty’s strong and reliable character.  I also liked Erin’s warm personality but her worry and distrust were too much. The book is full of interesting discussions. There are arguments on the pros and cons of recreational hunting, the pros and cons of celebrating Halloween and how to react to spiritualists. Also the story reveals difficulties in proving criminal cases of coercion.

Unfortunately I feel that the first part is bogged down with repetition of Erin’s distrust and worry. This became frustrating for me.  I think the story would have been improved by shortening that portion and still could get across the valid point that worry can cause us to live in cocoons instead of living a full life. Once the story moved into the mystery it was on more solid footing, was very engaging and moved quickly. I appreciate Ms. Wiesner’s smoothly descriptive writing that reveals realistic characters in real life mystery scenarios.  I also enjoy the faith based messages that are not preached but are woven into the story.

I liked that the characters from Retired and on the Rocks and Love is Blind...And It Don't Pay the Bills Either, books 1 and 2 in the Denim Blues series, were included in this story. This was a nice addition to the series but I would recommend reading them in order.

Find more wonderful and award winning books at Karen's Website.
Posted by Martha Eskuchen at 9:30 AM