Book Review and ARC Giveaway: Carrie Goes Off the Map by Phillipa Ashley

This is a fun and easy read.


Carrie Goes Off the Map
by Phillipa Ashley

Carrie lets her best friend talk her into a scenic European road trip as the perfect getaway from a nasty breakup. Unexpectedly along for the ride is the gorgeous Matt Landor, MD, who sorely tests Carrie's determination to give up men altogether. Careening through the English countryside, these two mismatched but perfectly attuned lonely hearts find themselves in hot pursuit of adventure and in entirely uncharted territory.

Carrie is a vibrant and likeable character. She has lived with her boyfriend, Huw, for ten years, since they became sweethearts in college.  She gave up her own career dreams to help him on his family farm.  She becomes understandably depressed when Huw tells her a few days before their wedding that he doesn’t want to marry her.  She is still trying to recover four months later when she accidently learns he is marrying his accountant. That sends her off on “crazy” mode!  She rushes off to the wedding with the intent to make a scene.

Matt is a handsome, single doctor who has dedicated his efforts working in a medical clinic in the jungles of Tuman. He hasn't made any plans on settling down and enjoys carefree, no-strings, relationships. He happens to be home in Oxford for a forced leave and is serving as an usher for his old college friend, Huw. He sees Carrie at not such a good moment and tries to keep her from really making a fool of herself.

Carrie and her best friend Rowena decide to get away by taking a European tour in a 1967 VW Splitter Van nicknamed Dolly.  At the last minute Rowena gets a job offer and Matt gets substituted as the trip companion. Carrie objects but doesn’t want to give up the trip.

Matt and Carrie spend time with other friends as they try to deny any attraction between them.  It takes a while before they acknowledge and act on that attraction. Carrie has some issues of trust to overcome before she can accept that there might be a relationship for her with someone like Matt.

There is a lot of British humor in this story. I really enjoyed the VW camper van and the various sites visited along the way. I don't really think about beaches and surfing as part of England but obviously they are. The author has a light touch to her writing yet manages to express painful and confused emotions. There is also open use of weed and a bit of casual sex, more so for Matt than Carrie. As long as you don’t let these issues bother you the characters and story are fun and the read is light and easy. 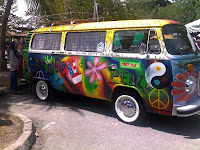 Thank you to Sourcebooks. for this book to read and review.

TO ENTER THIS GIVEAWAY for the ARC Copy:
1. Visit the author's website and tell me something of interest you found there.  This is required for entry.


* This contest is only open to residents of US and Canada.
* This contest will close 10 PM (Central) on January 6, 2012.
The winner will be randomly selected from all entries.
The WINNER WILL BE ANNOUNCED on January 7.
Winners will have 72 hours to respond by email or the winners form linked in the announcement.
Posted by Martha Eskuchen at 12:30 PM