I am pleased to welcome
Anita Clenney, Author of Embrace the Highland Warrior
to Reviews by Martha’s Bookshelf.
Thank you for sharing some of your writing wisdom - and humor - with us today.

Adding a Touch of Humor 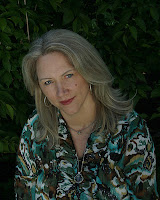 I love humor in stories. Of course it has to be tailored to the story or it can feel out of place, but even a dark paranormal or a thriller can benefit from stirring a grin in the reader. But funny is a funny thing. It’s difficult to tell if it really works, or if it just sounds funny to you. It usually takes some outside opinions to see if the humor hits the mark.

I always include some of these lighthearted moments in my stories to balance out the warriors and demons and vampires battling for the world. Brodie is my prankster. He’s a tough warrior, but he loves jokes; refilling a wine glass, slipping a fake snake into a female warrior’s bed. Bet he won’t do that again, because the warrior was Anna, and Anna doesn’t like snakes, real or plastic.

In the second book of my Scottish paranormal series, Embrace the Highland Warrior, the humor is even stronger, thanks to two old ladies. One is the heroine’s aunt. I should say, the heroine THOUGHT Nina was her aunt. But there are lots of things in Shay’s life that aren’t what they seem. Matilda, the aunt’s cousin, is the real kicker. Matilda has brilliant red hair, wears garish clothing, can’t hear worth a darn, loves gambling, and she’s claimed to be 49 years old since Shay was in elementary school. Matilda causes more trouble than a wound up toddler. Here’s what happens when Nina and Matilda try to play matchmaker.
Shay woke in the night. She heard a thumping sound downstairs. The noise didn’t concern her as much as the fact that she was draped over Cody and they were both naked. She lay for a minute, reliving what they had done, wondering how different things might have been if she had known he hadn’t ignored the letters. Would she have forgiven him for hiding her identity and moved on? Maybe to this? His life? His bed?
Cody nudged her shoulder. “Don’t follow me this time,” he said, untangling his limbs from hers and slipping out of bed.
She watched him pull on his boxers and pick up a gun from under a pillow on the sofa before easing out the door. Shay scrambled quietly for her clothes. She crept down the stairs, not far behind him. She couldn’t see his face, but she felt his glare. The front door was cracked. The chill of night air brushed her skin. As they slipped outside, busy little whispers met her ears, a grunt, and then another thump. Cody turned on a bright flashlight. She didn’t know where he got it. Shay saw a flash of red and heard a squeal as Matilda’s hands flew up in the air. The wheelbarrow dumped over, and Jamie rolled out like a sack of flour.
***
“We panicked,” Matilda said, between gulps from her water bottle. “So I thought if I gave him a little of my sleeping medicine—”
“A little?” Shay said, her voice shrill. “He’s out cold.”
Cody had carried Jamie back to bed and was with him, making sure Jamie was only drugged, not dying.
“Well, I may have given him too much. We didn’t want him to wake up in the car. He’s big, and he looks strong. That’s a nice, sturdy wheelbarrow. I need one of those to move rocks in my garden,” Matilda said.
“Where were you taking him?” Shay asked.
“Somewhere safe,” Nina said. “We didn’t want to hurt him. He seems like a nice boy. We just wanted him out of the way.”
“Out of the way of what?” Shay asked, exasperated.
“You and Cody,” Nina said.
“Cody and me?”
Nina clutched her robe tighter. “Here you are, back home after all these years, and we’re thinking you finally came to your senses, and Jamie shows up to ruin it all.”
“He wants to marry you,” Matilda said. “We couldn’t have that.”
Oh, heavens. “You think Cody and I are…?”
“But of course, dear,” Nina said. “We’ve always known. We were just waiting for you two to realize it.”
Matilda clutched her water bottle. “For a smart girl, you can be slow sometimes.”

Playing matchmaker is bad enough, but when Matilda is thrown into the middle of a group of covert warriors who must secretly protect humanity from demons, and are now faced with vampires as well, she becomes as much of a threat to the clan’s existence as the demons.

Cody headed to the kitchen and met Duncan. “Anybody seen Matilda? She’s missing again.”
Coira stopped wiping the kitchen table. “Bloody hell.” She slapped her hand over her mouth and then frantically crossed herself.
“It’s all right, Coira. Matilda could make a saint curse.” Cody sighed. “Nina hasn’t seen her?”
“She’s the one who alerted us.”
“She’s probably out terrorizing the guards,” Ronan said. “She asked one of them if this was some kind of gigolo set-up.”
Cody grimaced. “We’ve got to get her out of here before she destroys thousands of years of secrecy.”
“I saw her headed toward the library earlier,” Coira said. “Her and that giant cat.”
“The library? Damn it. The secret passages.” Cody hurried down the hall with Duncan and Ronan behind him. The hidden door stood open.
“Blimey,” Duncan said. “Might as well start offering tours.”
Cody stuck his head inside. “Matilda? I hear something,” he said to the others. “Anybody got a flashlight?”
“Here.” Ronan pulled one from his sporran and turned it on. The three men entered the stone passage, following the narrow beam of light.
“That way,” Cody said. “Matilda?”
They heard running, and a second later, Matilda flew into Cody’s arms. “Oh, thank heaven.” Her hair stood on end, covered by cobwebs. Red lipstick was smeared down her chin. “I got lost. I couldn’t figure out which way I came in. I don’t know what to do. I think I killed a man.”
“You killed a man down here?” Ronan asked, glancing at the others.
“Over there, around that corner. But I don’t think he was a man. I saw this shadow and thought it was one of you. I called out, and he leapt at me. He hissed. I’ve never heard a man hiss.”
“You sure it wasn’t the cat?” Duncan asked.
“No, I was holding the cat, only because it was dark, and my flashlight was dying,” she said, defensively.
Cody moved toward the corner where Matilda pointed. “Nothing here.”
“How did you kill him?” Ronan asked, eyeing Matilda doubtfully.
“Holy water.”
“Where the hell did you get holy water?” Duncan asked.
“Well, I was clutching my bottle of water to my chest. I carry one with me so I don’t get dehydrated. The doctor said I need to stay hydrated. And I got lost, like I told you, and I started praying somebody would find me, and since I was holding the water, I guess the praying must have blessed it. Or it might have been the cat.”
“The cat blessed the water?” Duncan asked, scratching his head.
“No. Killed the man. When he hissed at me, the cat hissed back and jumped at him.”
Cody caught Ronan and Duncan’s worried gazes.
“Then I threw my water bottle at him.” Matilda held her hand over her heart. “I think I might faint.”
“Come on, Matilda,” Duncan said. “I’ll take you up. Ronan and Cody will check it out. I’m sure it was just a shadow.”
“I’ve never seen a shadow with red eyes.”
“It couldn’t be,” Ronan said, his voice somber, as Duncan led Matilda away. “Maybe she’s insane.”
“She’s not normal, but she’s as sharp as your sword.”
“What the hell did she see, then?”
Cody aimed his light along the walls. “Damn.”
“What is it?” Ronan joined him, his gaze on the beam of light on the floor. A bottle of water lay in a pile of dust.
GIVEAWAY!
Sourcebooks is giving away two copies of Embrace the Highland Warrior to random commenters. My question is: What’s the funniest story you’ve read, or the best example of adding in humor?
* This contest is only open to residents of US and Canada but anyone can answer the question. :-)  Please let us know with your comment if you are not eligible for the giveaway.
Giveaway ends December 2, 2011 at 10pm Central.

Embrace the Highland Warrior by Anita Clenney—In Stores November 2011
They were driven apart by a timeless secret…
Cody MacBain let the woman of his destiny slip away. A member of an ancient clan of Scottish warriors, he grew up beside Shay Logan as her secret protector, but his heart compelled him to become more. Until Shay’s true identity was revealed, and the fated pair’s chance was gone…

But danger will drive them back into each other’s arms…
Shay fell for the boy next door, suspecting nothing of the ancient secrets he guarded. After a stinging betrayal, she’s determined to banish the memories of her first love forever. But the past can’t let go, and the boy she once loved has returned to her a warrior determined to protect her from the unspeakable evil fate has planned…

About the Author
NY Times and USA Today bestselling author Anita Clenney writes mysteries, and paranormal romantic suspense. Before giving herself over to the writing bug, she worked in a pickle factory and a preschool, booked shows for Aztec Fire Dancers, and has been a secretary, executive assistant, and a real estate agent. She lives with her husband and two children in suburban Virginia. To find out more information, please visit http://www.anitaclenney.com/, follow her on Twitter @anitaclenney, or like her on Facebook http://www.facebook.com/anitaclenneyAUTHOR.