This is a story that makes you wonder about the future, the past and the "what ifs." I recommend it - especially if you like issues of time/future paradox. 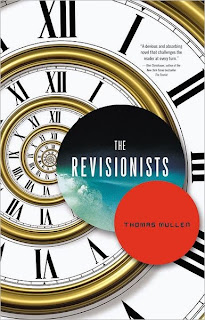 
A fast-paced literary thriller that recalls dystopian classics such as 1984 and Fahrenheit 451, from the award-winning author of The Last Town on Earth.

Zed is an agent from the future. A time when the world’s problems have been solved. No hunger. No war. No despair.
His mission is to keep it that way. Even if it means ensuring every cataclysm throughout history runs its course—especially the Great Conflagration, an imminent disaster in our own time that Zed has been ordered to protect at all costs.

Zed’s mission will disrupt the lives of a disgraced former CIA agent; a young Washington lawyer grieving over the loss of her brother, a soldier in Iraq; the oppressed employee of a foreign diplomat; and countless others. But will he finish his final mission before the present takes precedence over a Perfect Future? One that may have more cracks than he realizes?

Review:  I found this to be a good combination of engaging entertainment and thought provoking philosophy.

Zed is a “protector” of the future. His world of peace and well being resulted from the survivors of the great conflagration that destroyed the world of our present. Now Zed’s job is to make sure that events in the past (our present) occur as expected.  Zed travels to the past and follows instructions given by superiors to protect certain events. Zed insures that no “hags” interfere with the time stream.

Hags are other time travelers who are trying to stop the events that led to the great conflagration.
If the hags aren’t stopped they might go back and kill Hitler or prevent the 9/11 crashes. Although this would save thousands of lives, it wouldn’t allow the future to become what it should be... according to Zed’s handlers. There is a certain paradox that Zed is helping maintain tragic events but, in protecting the past, the argument is ‘the end justifies the means.’

The story also follows the paths of three present day people whose lives cross. Each character reveals a different view of corruption and a different sense of being alone. A common thread of the characters is their disillusionment with their jobs and their struggles to change circumstances surrounding them.  Eventually, or more accurately, finally, even Zed starts to question the instructions and limited facts that he is being fed.

Most of the story takes place in the present time and reveals pictures of Zed’s future world through comparisons.  Zed wonders if people appreciate the fresh air and the complex cities they live in. He marvels at the different races of people with their  prejudices and anger. He steps into the beautiful churches and thinks about the religions that cause such strife.  The reader gets a vision of a future world without races and without religion. But you also begin to see the restrictions in Zed’s world where they are not allowed to learn of the history before the great conflagration. They are not allowed to question their superiors.  Is it possible that Zed’s loved ones have been killed to eliminate their threatening inquires and to manipulate and control Zed?

Zed begins to learn more about the alias that has been established for him. As he uncovers the circumstances of the missing “Troy Jones” and discovers more events of that life it begins to cross over into parallels - or is it memory? - of Zed’s life.  Zed doesn’t know what to do when he realizes that he has always been able to look back at the facts given him and he has forgotten  what it is like to not know what the future holds. Manipulating the events of the past creates a point where one has to question which circumstances will change the future?  Could the future be better ... or worse? And who gets to make the decisions as to which events to protect or which might be better changed? With so much corruption abounding, who are really the revisionists?

This is a story that could probably benefit from a re-reading. I liked the writing which switches from first person for Zed to third person for the other characters. I read part of the book and  listened to part on Audible to speed the reading.  The narrator did a very good job and for me the easy but steady pacing blended with the puzzlement of the “what if” question.

I received the ARC for review from Mulholland Books, Little Brown and Company, division of Hachette.
I will probably add this to the ARC box after a bit.
Posted by Martha Eskuchen at 10:40 PM