If you like action packed paranormal and sexy Highlander warriors this book is one you should read! 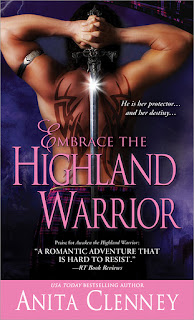 Embrace the Highland Warrior
by Anita Clenney
Genre: Paranormal Romance
My Rating: 4.5 of 5.0


Book Description
Publication Date: November 1, 2011
When the powerful demon that left Shay for dead discovers her empty grave, he comes seeking retribution, believing she possesses an ancient book he has sought for centuries. Knowing she can't fight the demon alone, Shay returns to her clan and the Scottish Warrior who betrayed her...the only man she's ever loved, where she discovers that betrayal isn't always what it seems. Sometimes it's far worse.

Review:  This is full of action with estranged sweethearts and a dedicated hero.
Shay and Cody had been childhood best friends who grew closer as they matured. But when a teenage Shay learned that her past had been a lie she ran off feeling angry and betrayed. Cody didn’t reply to her efforts to contact him a few months later so she tried to move on with her life - alone.

Cody loved Shay first as a friend and later as something more. All his young life he and his family took steps to protect her while keeping secret that they were demon fighting warriors.  It has been nine years since Shay ran away but now she is back. Cody knows that he will never get Shay out of his system and he doesn’t want to. He has to find a way to protect her and win her back.

Cody is joined by his brothers and other warriors as they gather to protect Shay from the demons who are chasing her.  They think she has a special Book of Battles that has been found and stolen.  As dark shadows and attacks mount up they discover there is another enemy.  Apparently vampires are real and they are after Shay and the Book too.  Electric locks and sophisticated technology should keep demons out but locks won’t keep out vampires and the warriors aren’t trained to kill them.  As if these enemies weren’t enough there is a stalker and someone killing women who look like Shay.

This book jumps into action and doesn’t slow down till the last pages. There is hurt and angst as Shay and Cody try to work through their painful past and the misunderstandings that separated them. There is more betrayal and jealousy as the boyfriend Shay just broke up with shows up and turns out to be another warrior assigned to protect her.  And there are more secrets to be revealed.

The story is a bit busy with action, emotion and love that finally gets to be expressed. I loved all the action and mystery and I liked that the romance was a primary part of the story but the lovemaking scenes were few and, although intense, they were not overly graphic. There is also humor with some uniquely wacky ‘relatives.’

There are a “clan” of other characters who took a bit of sorting out. As other warriors began appearing in the book I realized this is the second book in a series.  These are warrior men and women who are there for each other. I really liked Bree and Faelen and will have to go back and read their story in Awaken the Highland Warrior.  I hope there will be more stories to come soon!

Thank you to Sourcebooks for this fun read to review. Sourcebooks is giving away TWO books - see the Author Guest Post to comment for entry.
* This contest is only open to residents of US and Canada.
Posted by Martha Eskuchen at 6:25 AM