Description of Ted Saves the World 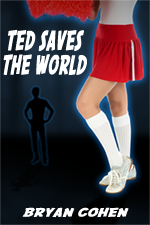 A possessed cheerleader. A cursed gang of criminals. Mysterious telekinetic powers. An angry ex-girlfriend in gym class? One second, sophomore in high school Ted endures his first breakup in his favorite place in town. The next, a mysterious blue light turns him into a worldwide superhero sensation for taking down a posse of grisly murderers. As his views on YouTube increase and his friend Dhiraj tries to capitalize on the marketing potential, his dangers increase as well when a presumed-dead cheerleader begins taking a personal interest. Can Ted survive his first week as a superhero in the public eye? This novella is the first taste in a series of full-length novels about the adventures of Ted Finley and Erica LaPlante. The book is also available on Barnes & Noble and Smashwords for $0.99.
Guest Post
The Writer's Social Life
By Bryan Cohen
I'm writing this blog post while I'm sitting alone in my bedroom. This isn't extremely surprising since most people writing tend to write alone. Sure, there are writing groups and clubs, but in most cases, the prolific writer tends to spend a good chunk of time alone. I imagine that some successful authors are out hobnobbing with the stars, but if most writers are like me, they are staying in on Friday and Saturday night in an effort to get a little writing in the next morning.
In addition to being a bit lame on weekend nights, I also tend not to drink when I go out. While Poe and Hemmingway seemed to gain a noticeable boost from their alcoholic cavorting, drinking mostly makes me sleepy and lethargic for the next 12 hours or so. When I feel like that, I'm not as much for stringing words together as I am stringing Zs together. I also don't smoke or do drugs. So, how does a writer like me keep friends from conveniently forgetting my phone number?
First of all, I pick my friends wisely. My best friends are hard working folks just like me. They aren't writers but they know that dropping off the radar for a bit is less a sign of bruised loyalty than it is a simple need to do the work. Secondly, when I am out with a group of people I try to make sure that I am present in the moment. If every time I'm out with people, I'm just thinking about my writing, they will know that I'm not truly paying attention to them. By listening to them and focusing on the conversations at hand, I am much more likely to be considered a welcome addition. Last but not least, I make an effort to be the life of the party. I'm a comedian through and through and I love making an entire room laugh. If I am able to keep a room light and fluffy because of my jokes, my friends and acquaintances will want to invite me back over and over again.
It's not easy being in a profession that is so naturally ostracizing. It can be difficult on your more social pals and over the years you may lose one or two of them. But if you pick the right kind of friends, listen to them and entertain them every so often, they will not only keep you social but they will also be your biggest support when you need it the most.
~~~~~
Giveaway:

Bryan Cohen is giving away four $25 Amazon gift cards, one for each week of his month long blog tour. To enter, simply comment with your e-mail address (feel free to substitute @ with (at) or other tricks to stop spammers from getting it). Bryan will draw the four names at the end of the tour, picking one entrant at random from each week’s set of blog posts. Entries will be counted through Monday, August 15th, 2011. Enter on as many sites as you want, follow the tour at Build Creative Writing Ideas. If Ted reaches the Top 100 on Amazon at any point during the tour, a fifth $25 card will be added to the giveaway.

Biography:
Bryan Cohen is a writer, actor and comedian from Dresher, Pennsylvania. He graduated from the University of North Carolina at Chapel Hill in 2005 with degrees in English and Dramatic Art and a minor in Creative Writing. He has written seven books including 1,000 Creative Writing Prompts: Ideas for Blogs, Scripts, Stories and More

. Contact Bryan through http://bryancohen.com, his Ted Saves the World blog, his Build Creative Writing Ideas site or Twitter.
Posted by Martha Eskuchen at 6:30 AM