What Are You Reading, is where we gather to share what we have read this past week and what we plan to read this week. It is a great way to network with other bloggers, see some wonderful blogs, and put new titles on your reading list.
Last week was strange - I actually took off All Wednesday to have a "girl day" with my sister, daughter and the granddaughters. Really rare for me to take off! Then I spent part of Saturday with my family.  :-)
I finished three books last week.  I posted three reviews, two with Giveaways.  As usual, I posted the regular Friday Pick Giveaway; Saturday Sharing Beyond Books, and Sunday posts.

I did get to visit a dozen or so other Monday Reading posts last week.  These were last week's posts plus Winner posts not listed.
Finished Reading:
Print/Kindle:

The Vampire Next Door
by Ashlyn Chase
Review and ARC Giveaway linked above.

by Theodore Taylor
This was a free summer download at
AudioBook Community -
SYNC YA Listening.
I will post a review  this week.
Quite interesting!
When a freighter to the United States is torpedoed during World War II, an 11-year-old boy is blinded and stranded with an elderly black man who teaches him survival skills.
Phillip Enright lives with his parents on the island of Curaçao where his father works for Royal Dutch Shell. There is a threat of a German invasion and Mrs. Enright decides to take Phillip back to the states. When the ship they are traveling on is torpedoed, Phillip is separated from his mother and left floating on a wooden raft with Timothy, a black man from the West Indies. The two drift to a small cay where they are left to survive with only a small amount of food salvaged from the ship. Phillip, who is blinded by a head injury, must depend on Timothy to stay alive. Though Phillip has been reared to be prejudiced against blacks, his attitude changes as Timothy teaches him to be independent in spite of his blindness. 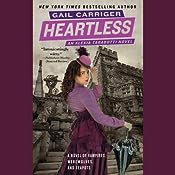 Heartless: The Parasol Protectorate, the Fourth
I really like this series!
Product Description.
Lady Alexia Maccon, soulless, is at it again, only this time the trouble is not her fault. When a mad ghost threatens the queen, Alexia is on the case, following a trail that leads her deep into her husband's past. Top that off with a sister who has joined the suffragette movement (shocking!), Madame Lefoux's latest mechanical invention, and a plague of zombie porcupines and Alexia barely has time to remember she happens to be eight months pregnant.
Will Alexia manage to determine who is trying to kill Queen Victoria before it is too late? Is it the vampires again or is there a traitor lurking about in wolf's clothing? And what, exactly, has taken up residence in Lord Akeldama's second best closet?
Line Edits/Releases:

We released The Gift by Kat Deacon last week.


All Seri Graham wanted for her sixteenth birthday was a date for junior prom and a car. Not much right? Seri goes from bubble gum and chick flicks to smiting demons and meeting her Gregori Watcher mother for the first time. Along with her two besties Maya and Lucy, using the gift from her mother, Seri tries to survive long enough to discover who and what she is and make it to the prom.

This week the fourth
Prom Night Anthology Novella was released:
A Tale of Two Prom Dates by Evie Alexis.


Victoria Reynolds is getting ready for prom. She has the dress, the shoes, even the beautician. The problem is: she has one too many dates.
One second, Victoria accepts the invitation from the star basketball player Randy Calhoun. After running into philosophic thinker, Scott Feldman, on a quick walk, she agrees to be his prom date.
Will Victoria be able to make up her mind in time, or will she hurt both boys as she struggles with “The Carmen Curse”?
La-la-la-la!.

The Lady of the Storm

by Kathryne Kennedy
I'm not sure why this has been a slow read...I like the fantasy world and the characters. I hope to finish and review by Wednesday.   Reading for Sourcebooks.

Product Description
Acclaimed for her world-building, in Kathryne Kennedy's new series love miraculously prevails over strife.
Storm lord's daughter Cecily Sutton's powers over sea and sky have put her life at risk. Giles Beaumont is reluctant to protect her, until he falls under her enchanting spell...

by Ciji Ware
I like the story
and the architectural detail in this.
Reading for Sourcebooks.

Product Description
from author site
This “stand-alone” prequel to A Light on the Veranda is a romantic novel of intrigue and suspense set in modern-day New Orleans with echoes of nineteenth century Louisiana, when Cotton was King.  Corlis McCullough, a take-no-prisoners TV journalist, late of Los Angeles, and her former UCLA nemesis, King Duvallon, an historic preservationist with deep roots in the Crescent City, are an unlikely pair to join forces to save a beautiful Greek Revival building with origins linked mysteriously to those of their own ancestors during the Golden Age in the Big Easy   Both must grapple with the unlikely concept of “genetic memory,” a force that appears to be intruding on their lives and thwarting any chance for ultimate happiness.

by Gillian Bradshaw
I figure I will start this by the end of the week. Reading for Sourcebooks.

Product Description
On the path toward greatness, even a hero makes mistakes.
Armed with his magical sword and otherworldly horse, Gwalchmai proves himself the most feared and faithful warrior of Arthur's noble followers. But while defending the kingdom, he commits a grave offense against the woman he loves, leading her to disappear from his life and haunt his memories.
With his trusted servant, Rhys, a commonsense peasant, Gwalchmai tries to find her in the Kingdom of Summer, where Arthur has sent him. But an unexpected and most malevolent force of evil and darkness is loose-that of his mother, the witch-queen Morgawse-and Gwalchmai finds that the secrets of his past may deny him peace...
In the second book of Gillian Bradshaw's critically acclaimed trilogy, Sir Gawain comes to life as Gwalchmai, startlingly human yet fantastically heroic. 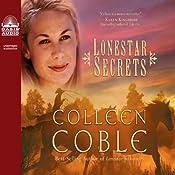 This is our Ladies Book Club
read for next Saturday.

Product Description
Shannon Astor returns to southwest Texas to serve as the town's veterinarian, believing she's finally found the space to get her life back on track.
Then she catches a glimpse of Jack MacGowan, the man who ruined her life years before. But even more shocking is the sight of Jack's five-year-old daughter Faith, who bears an uncanny resemblance to Shannon's own daughter Kylie. Is it possible that their similarities could be more than just coincidence? Could Faith be the daughter that Shannon has believed to be dead for all these years?
As the truth emerges, everyone is forced to take sides--in a story with a heart as big as Texas.

Audio:
[Listening to The Screwtape Letters is on hold right now. We are joining with another Sunday School class for several weeks - one because we will be gone three weeks in September and two because it is an awesome study on the Antichrist and end times events.]

I am also listening to The Listener's Bible NIV
read by Max McLean. I am at Job 3, Isaiah 45 and 2 Corinthians 8.

Line Edits: I have a break on edits for a week. Instead I am working on setting up print releases. If it's not one thing it surely is another. :-)

August Review Books - all accounted for. :-)

These were read and ready for reviews for Authors. I am sending out interviews for these. I hope to post them all in September.
Quest for Magic by Jean Hart Stewart - Read; review to be posted with interview.
Seeing for the First Time (What You See is What You Get)

and
To See (What You See is What You Get)

by Nicole Zoltack - Both Read; setting up author interview with reviews.
Steamrolled

by Pauline Baird Jone. Read; review to be posted with author interview.
Posted by Martha Eskuchen at 10:00 PM