Book Review and Giveaway: The Remains by Vincent Zandri

Can the "remains" of a childhood trauma contribute to a new nightmare??
The Remains by Vincent Zandri 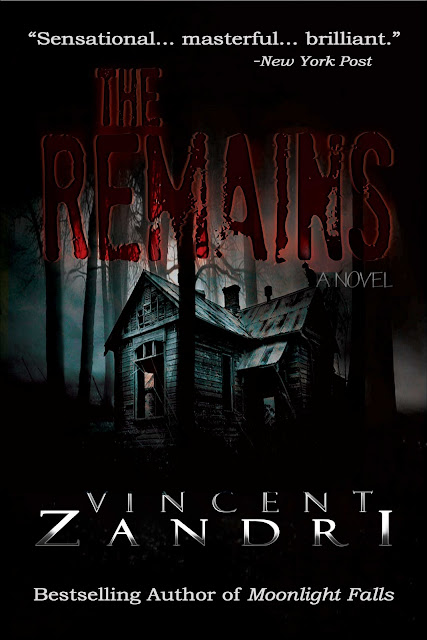 Product Description
Thirty years ago, teenager Rebecca Underhill and her twin sister Molly were abducted by a man who lived in a house in the woods behind their upstate New York farm. They were held inside that house for three horrifying hours, until making their daring escape. Vowing to keep their terrifying experience a secret in order to protect their mother and father, the girls tried to put the past behind them. And when their attacker was hunted down by police and sent to prison, they believed he was as good as dead. Now, it s 30 years later, and with Molly having passed away from cancer, Rebecca, a painter and art teacher, is left alone to bear the burden of a secret that has only gotten heavier and more painful with each passing year. But when Rebecca begins receiving some strange anonymous text messages, she begins to realize that the monster who attacked her all those years ago is not dead after all. He s back, and this time, he wants to do more than just haunt her. He wants her dead.

Review: Very well done! This mystery thriller kept my attention from beginning to end. I liked how the story is told by Rebecca describing current day events and in flash backs slowly revealing her childhood memories  when she and her twin sister were young teens and attacked by the monster in the woods.  The author skillfully builds the tension step by step.  He sets the stage for the villain, while presenting a full picture of Rebecca’s life through the secondary characters: her ex-husband, Michael, her best friend Robyn, an autistic savant art student, Franny, and even her sister, Molly, who gives her strength through memories.

Although each character adds to the story, Franny has a key role in racheting up the suspense as he paints images from Rebecca’s past that she thinks no one could know about.  Franny presents a new painting each day with a hidden word that initially only Rebecca can see. The first word is “listen” and this becomes alarming when Rebecca begins to get unexplained text messages, hears her name whispered and her cell phone ringing in the middle of the night. Each painting ads another edge to the chill of the story.

I liked the renewal of the relationship between Michael and Rebecca which gives the story a sense of hope and growth even in the midst of fear and evil.  There is sadness after the fear but then there is joy and new life too.  The story moves at a consistently engaging pace toward Rebecca’s inescapable confrontation with the child abductor. The story twists are more anticipated than unexpected - you just don’t know quite what they will be. Even though you know there will be an attack, the story keeps your attention as you wonder how and when it will happen.

I also liked the information supplied on savant autistic people.  I can easily recommend this as an enjoyable thriller read.

A phrase I liked:  "Fear warped time, bent it the same way it crippled my insides."

for Giveaway!  Watch the trailer and read an excerpt at the Pump Up Your Book link.

TO ENTER THE GIVEAWAY  - TWO COPIES:

1. Visit the author's website or blog and tell me something of interest you find there - Required for entry.
Please leave your e-mail!

3. For an extra entry, become a follower or tell me if you are already a follower.

4. For three extra entries, blog, facebook, tweet (any of those networks!) about this giveaway and tell me where you did.

(Seven total entries possible.)
It isn't necessary to use separate entries unless you want them in different chronological order.

* This contest is open to US and Canada only.
* No P.O. Boxes Please - for shipping reasons.
* This contest will close 10:00 PM (Central) on December 22, 2010. The winners will be randomly selected from all entries.  TWO WINNERS!
Posted by Martha Eskuchen at 6:30 AM