I liked this quick listen which was full of action. 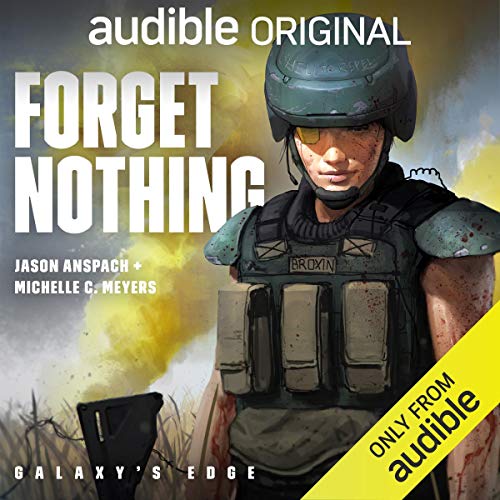 About This Audible Original
She Chose the Hardest Way
The daughter of a Legion war hero, fighting was in Andien Broxin's blood. But the battles Republic marines face on strange and alien worlds are a far cry from the vaunted, brutal, no-holds-barred conflicts fought at the edge of the galaxy by the elite legionnaires.
Until a devastating war erupts right in the Republic’s stellar backyard.
Newly stationed on a mid-core planet being harassed by terrorist revolutionaries, Andien and her fellow "hullbusters" find themselves right in the middle of a desperate fight for survival. All their training, standards, discipline—all the hard paths—have led to this. If she and her fellow marines are to come out of this alive, Andien will have to find out who she truly is...and what she can become.
Best-selling military science fiction author Jason Anspach and USMC/US Army veteran Michelle C. Meyers explore the rigors of combat, survival, and the human will in this edge-of-your-seat account set in the Galaxy’s Edge universe.
©2020 Galaxy's Edge, LLC (P)2020 Audible Originals, LLC.

Review:
Andien grew up under a marine father who was an elite member of the Legion. Andien may have to push herself harder, but she can shoot better than most men and she can take most of them on for one-on-one combat. Always remembering her father's words: "Forget nothing", she has been advanced in rank on her own merit.

Andien and her troop are serving on a foreign planet where they are assigned to protect the locals and colonists from hostiles in the wild. Unfortunately, it that turns out the worst hostiles are a gathering of revolutionary, terrorist colonists. Her crew has to team up with the Legionnaires assigned to the planet. The Legion men have all the tech and enhancements but this group, not like others, is appreciative of Andien’s efforts.

When negotiations for Republic marines ends up agreeing to allow women to join the Legion, Andien’s name is submitted as a candidate. She is encouraged by others, but she has to decide if she is willing to work extra hard to go in the first class.

I did enjoy all of the action, strategy and tactics in this book. I like Andien and the supporting characters. Although it is set in a series, it is set in a different time and place and does not continue the characters from the other books. I enjoy this author and have more to listen to in the series. I recommend this shorter story to fans of space and high tech military action.

Audio Notes: I enjoyed the narration by Khristine Hvam. She provided distinct voices and good energy. I am glad I had this in audio.