Audible Book Review: After It Happened Books 5 and 6 by Devon C. Ford

This is a good Post-Apocalyptic with struggles, defeats, and finally victories.
After It Happened
Publisher's Pack 3
By: Devon C. Ford
Narrated by: R.C. Bray 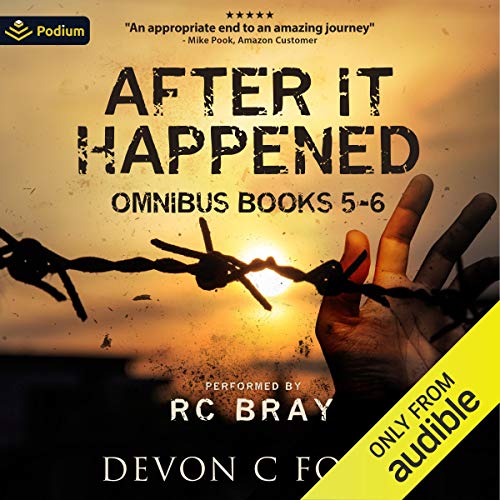 Publisher's Summary
This publisher's pack contains Sanctuary (book 5) and Rebellion (book 6) of the After It Happened series.
Set in the UK in the immediate aftermath of a mysterious illness that swept the country and left millions dead, the series follows the trials facing a reluctant hero, Dan, and the group he forms around him. They must battle the elements, find sufficient supplies and equipment to survive, and protect themselves against the most destructive force on the planet: other people.
Sanctuary, book 5: Scattered, the group must come to terms with their new reality. They face more danger than they can deal with. They have no idea if they can win the race against time before one of them becomes critical. Meanwhile, back at home, a plan is hatched to overthrow a tyrannical rule.
Rebellion, book 6: Steve, now recovered from his horrific injuries, forms a plan to restore the balance of power in their camp, but his opposition is also playing a dangerous game. Meanwhile, Sanctuary reveals its secrets to Dan and the others, and they find safety and comfort behind the high walls. But safety is an illusion, and there are forces converging on them with a malevolence that they have not battled before.
©2017 Devon C. Ford (P)2018 Podium Publishing


Review:
These two books continue to tell the stories of several groups of survivors. Dan and his group are traveling through Europe to get to Africa where Emma believes she can find a cure to help Melissa (Dan’s woman) safely deliver their baby. They face killing marauders, lose supplies and become separated along the way. Having heard a radio message, they seek a fortified town called Sanctuary. When some of the survivors reach Sanctuary they need to prepare the town for the evil that may follow them.

Meanwhile, the original home base has been taken over by a fascist military leader who controls his troops by fear. Steve and the remaining members of the group have been captured and the others are conscripted into various jobs while Steve recovers with a doctor who agrees secretly to help lead a rebellion coup.

There are four young people who escaped from the troops who head out to find Dan. At least one of them, Chris is angry and blames Dan for leaving the home base insufficiently protected. This group is captured by the vicious marauders who almost captured Dan. Two of them are horribly torture before they break free.

I found these books to be very realistic which includes danger, oppression, torture and other traumatic events. There was a point where I wanted to have a better result for the good guys, but I had to continue in hopes of victories. There is some swearing and, of course, brutality. I recommend this series to true fans of post-apocalyptic adventure.

Audio Notes: I always enjoy the narration of R.C. Bray. He conveys distinct voices and energy that fits the scenes of the story. His narration enhanced my enjoyment of this story.