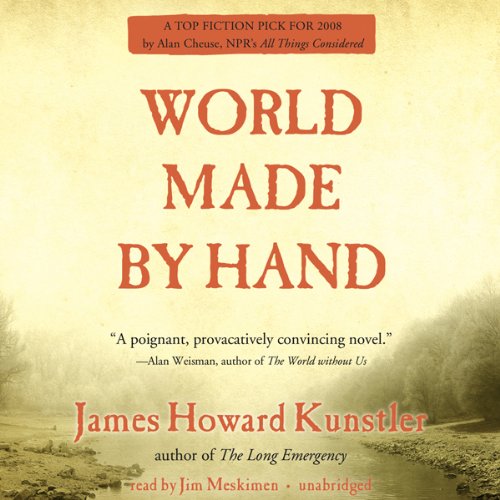 Publisher's Summary
In The Long Emergency, celebrated social commentator James Howard Kunstler explored how the terminal decline of oil production combined with climate change had the potential to put industrial civilization out of business. In World Made by Hand, an astonishing work of speculative fiction, Kunstler brings to life what America might be, a few decades hence, after these catastrophes converge.
The electricity has flickered out. The automobile age is over. In Union Grove, a little town in upstate New York, the future is nothing like people thought it would be. Life is hard and close to the bone. Transportation is slow and dangerous, so food is grown locally at great expense of time and energy, and the outside world is largely unknown. There may be a president, and he may be in Minneapolis now, but people aren’t sure. The townspeople’s challenges play out in a dazzling, fully realized world of abandoned highways and empty houses, horses working the fields and rivers, no longer polluted, and replenished with fish.
This is the story of Robert Earle and his fellow townspeople and what happens to them one summer in a country that has changed profoundly. A powerful tale of love, loss, violence, and desperation, World Made by Hand is also lyrical and tender, a surprising story of a new America struggling to be born - a story more relevant now than ever.
©2008 James Howard Kunstler (P)2010 Blackstone Audiobooks


Review:
Robert Earle is old enough to remember life before technology started to fail and bombs eliminated live as known in the 21st century. Now there is only limited electric power, food is grown locally, transportation is mostly horse and cart or walking, and life is generally hard. Robert lost his wife and daughter to illness in a two year period. Five years later his nineteen-year-old son took off to find out what was left of the world. There are no phones or mail service to stay in touch. It is enough of a struggle to get clean water and barter for supplies without running into violence.

Robert goes on a trade run to the local ‘trading post’ (think a dump taken over by a gang). He ran into a young man, Sean, who is there with his dog. Since the guard won’t allow Sean in with the dog, Robert agrees to pick up Sean’s list. But before the transactions are complete, gun shots are heard and Robert returns to the entrance to find Sean and his dog shot to death. Although the guard claims self-defense, clearly there is a problem with the trading gang but there is no one in town to investigate, arrest or pursue the murder. There is a Chief of Police/Sheriff but he said he “wouldn’t serve if elected” and has continued to drink and live up to that promise.

A new religious group, consisting of 70 or so members led by Brother Jobe, has arrived in town. Brother Jobe is prepared to push for more control in the community. Soon, at a duly called town meeting, the existing, do-nothing mayor is fired, and Robert is elected as the new mayor. Robert’s friend, Loren, the existing Pastor, is elected to replace the Chief of Police. Robert and Loren are at least willing to take their positions seriously but before they take up their tasks, Robert is asked to join a rescue team to travel down the river to find a boat of local men who took trade goods to another city. They do manage to find the men but retrieving them ends in violence.

When the team returns with the men, there is a celebration. While most of the community attends the festival, the trader gang members travel through town apparently looting and intimidating people who remained in their homes. One of those intimidated is Sean’s widow who has moved in as Robert’s housekeeper after her house burned down.

Robert and Loren have a jailed prepared. They arrest Brother Jobe for shaving people without consent. Then they attempt to arrest the trading gang leader which ends in a violent confrontation. The town situation is changing and Robert, Loren, Brother Job and the others have to juggle to find their way in this strange new life.

This dystopian story focuses on personal and relational issues as the survivors struggle to continue life and find an acceptable level of community. I wasn’t thrilled by the female characters who are given lesser roles bordering on sex objects. The descriptions are lyrical at times and I liked the title phrase. I found the overall story interesting if not totally compelling. I do have the next three books and plan to continue to listen over the next few months.

Audio Notes: Jim Meskimen is a new-to-me narrator and I think he does a good job. His voice seems to fit Robert and he gives appropriate accent and energy to the characters. The audio enhanced my engagement in the story.

God is With Us! 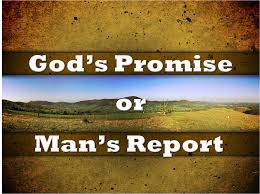