Audible Book Review: Death at the Gazebo by Minnie Crockwell 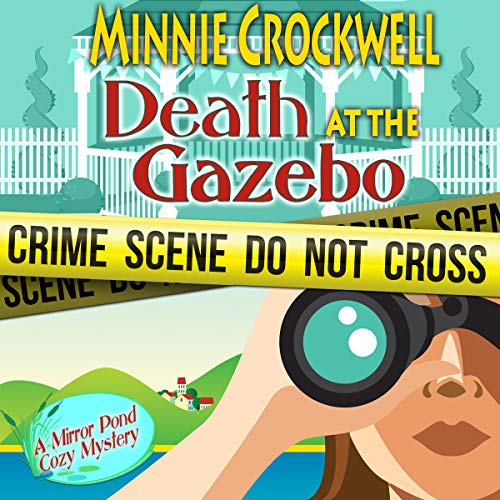 Publisher's Summary
First in a new cozy mystery series from Minnie Crockwell.
Settling into her new condominium on Mirror Pond, novelist Sallie Chilcoat feels lost in Ashburn, Virginia, after moving to the state for love of a man. But with the end of that relationship, she finds herself at loose ends. She stares out the window at the pond and contemplates learning to kayak...or taking up painting...or climbing Mount Everest.
Movement in the overwater gazebo catches her eye, and she grabs up her people-watching binoculars to see a man sitting inside the gazebo playing an accordion. Curious about the musician who plays such a rare instrument, Sallie trots down to the pier to investigate.
The term “investigate” takes on a whole new meaning when Sallie reaches the gazebo to discover not a happy musician, but a dead body and a missing accordion. Forget Mount Everest! Sallie finds herself immersed in the mystery of the death at the gazebo.
©2019 Minnie Crockwell (P)2020 Minnie Crockwell

Review:
Sallie is a romance novelist although romance didn’t work out so well for her after she moved to Virginia to be with the man she loved. Soon thereafter he ended their relationship. Now she is sort of stuck in her condominium taking breaks from writing by jogging around the condominium ponds and gazebo. One morning she spots a man playing an accordion in the gazebo. When she comes back around, she finds him dead!

Before the police arrive, a local couple appear at the crime scene and Sallie notes that the wife is struggling with grief while the husband is struggling with anger. Soon, the local gossip chain, including Sallie’s across the hall neighbor, gets busy sharing information and Sallie learns the deceased was seen with multiple women, some married, who could be suspects. The suspects expand to jealous husbands too.

The police detective shares some information with Sallie as she shares the local gossip information and the efforts of her own unauthorized sleuthing. Meanwhile, Sallie is coordinating information with the condominium handyman, Bill, a man she has some interest in. But she is cautious since other single women surely find bachelor Bill interesting too. And it seems that Bill is very reluctant to discuss his own past.  Sallie and Bill both have some emotional history that leads to misinterpretation of signals.

The characters are likeable, and the plot has several suspects to keep things moving along. Some of the writing seemed simplistic but that was okay.  I enjoyed the easy flow of the mystery, the light humor and the hint of possible romance. I like this as a first of a new cozy mystery series and would be interested to read more. I recommend this to fans of the genre looking for a quick read/listen.

Audio Notes: Michelle Babb does a nice job with the narrations. She is able to give enough voice to the characters to keep them distinct while she also provides fitting emotion and energy. I enjoyed the listening experience.