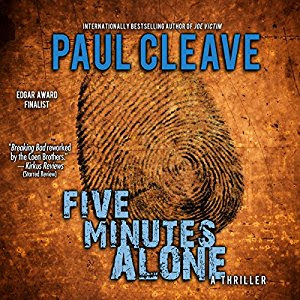 Publisher's Summary
There's a common plea detectives get from the loved ones of victims: When you find the person who did this, give me five minutes alone with them. And that's exactly what someone is doing. Someone is helping these victims get their five minutes alone.
When the body of a convicted rapist is found, the detectives try to determine if this is murder or suicide. The following night two more rapists go missing. It's hard to investigate when everyone on the police force seems to be rooting for the killer. But when innocent people start to die, two detectives find themselves with different objectives, and soon they're battling something they never would've expected: each other.
©2014 Paul Cleave (P)2016 Dreamscape Media, LLC


Review:
Detective Inspector Theodore Tate has recently come back on the force after a suspension and an injury that left him in a coma. He has his own sorrows at home as he and his wife are still grieving the death of their young daughter by a drunk driver. Although three years has passed, Tate’s wife is unable to stay in reality and accept their daughter’s death. But personal troubles can’t keep Tate home when murder comes calling.

Tate gets the call from his partner, Rebecca Kent, advising that a recently released rapist has been found on the railway tracks. Although this death might be a suicide, there are some details that don’t fit. Tate and Kent agree that the world is better with this man dead, but they suspect foul play. Unfortunately, the first suspect is the young woman who was brutally assaulted and raped by the dead man. When they visit her at home she responds reasonably but Tate finds clues that he doesn’t share right away. Even if she was involved, she would have had to have help.

Soon there are more deaths involving other criminals. No one will miss these miscreants but that doesn’t mean the police can ignore the crimes. It appears there is a vigilante killer and some clues make them suspect that a police officer may be involved. Tate and Kent are a good team working to unravel the mysteries while providing emotional support for each other.

I have never thought I would want ‘five minutes alone’ to confront someone who hurt a person that I loved, but, thank goodness I have never been in that position. I know many people, particularly men, who have threatened violence if someone hurt their spouse or children. That is the premise of this book and it is interesting how different victims respond when offered the opportunity to hurt the men who hurt them or their loved ones.

The vigilante who is giving this opportunity is an interesting character. He starts as a person who has lost all sense of living until he hears that a former criminal is out on parole and back in the neighborhood. Slowly his involvement with the criminals and victims brings him a new purpose, even though he feels some guilt and anger as he knows what he is doing is not legal. He continues partially seeking redemption and partly because he figures he is living on borrowed time anyway.

The story is told in alternating voices which I found worked well. Tate speaks in first person when he is active in a scene while other scenes are told in third person. Mr. Cleave does a good job developing the characters and sharing their inner conflicts as they weigh legal right and wrong, and legal justice against private justice. There is some violence woven in the twisting plot. I admit I began to worry that the story would not end well for Tate. I won’t say more except that there were more twists and a suitable, if not fully satisfying, ending. (Of course it’s hard to have a HEA for a murder thriller!)

The pacing and details of the story made it move along well even though it is more police investigation than chase and action. There is plenty of suspense and I highly recommend this to readers who enjoy this genre. This was fine as a standalone as I hadn’t read any of the prior books in the series. I would like to read more by Mr. Cleave.

Audio Notes: Paul Ansdell does a spot on job with narration. He manages to convey the pathos, anguish, anger and doubt that run through the story. His accent fits the setting and characters and makes for an enjoyable listen experience.


I received this audio book from the publisher through Audiobook Jukebox. It adds to my Audio Challenge.
Posted by Martha Eskuchen at 11:30 PM