Book Review and Tour Giveaway: Once Upon a SEAL (Lucky Thirteen Book 5) by S.M. Butler

This is a fast paced strong romance with a spike of danger.
Once Upon a SEAL (Lucky Thirteen Book 5)
by S.M. Butler 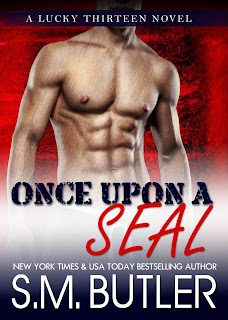 Genre: Contemporary Romance
My Rating 4.0 of 5.0

This is reading very quickly.
I will be posting a tour review on 5/20.
Book Description
Publication Date: May 19, 2015
Maddie Benson has spent her entire life in Sugar Falls and has never ventured—nor wanted to venture—beyond her small town’s safe borders. But when her delivery job takes her to the doorstep of one very reclusive, former Navy SEAL, Sebastian McIntyre, her small town perceptions are challenged with every conversation they have. It’s not long before she’s losing herself—and her heart—to the mysterious man behind the door.
Bastian’s scars are deeper than the surface. They’re embedded into his soul, and he’s content to keep them buried. But the second Maddie ends up on his doorstep with her sparkling smile and her sunshine hair, his quiet new life shatters and she just might be able to excise the demons he’s tried hard to keep tucked away—if he lets her in.
When Bastian’s old life comes haunting them, he knows he should let her go. But the light she shines on his soul keeps the darkness within him at bay. Letting her go may take more strength than he has, and keeping her close could get her killed.


Review:
Maddie is a lively, energetic college student. She loves her small town life and fears going away to a four year college in a big city. She works at the local market and one day is asked to deliver groceries to a cabin in the woods. She passes the bags through the door but is curious about the brusque man behind the door.

Sebastian, aka Bastian, is a young former SEAL who was injured on his last mission. He moved to Sugar Falls to hid away from the world. His sister, Jenny, usually delivers his groceries but one day a beautiful, bouncy young lady startles him.  He is glad when she returns in spite of the fact that he slammed the door in her face that first delivery.

Maddie and Bastian talk through the door and slowly build a friendship. But each time she asks to see him he shuts her out and ends their conversation.

Bastian learns that he and the men of his former SEAL unit are being targeted for assassination. Not only is the killer going after the men but he is going after their families to cause the most hurt. One of Bastian’s mates sends a two person team to Sugar Falls to help protect Bastian and Jenny. Unaware of the danger, Maddie is left vulnerable to a killer.

I enjoyed the fast pace of the story and I liked the primary characters. Maddie is a truly sunny person who is easy to like. Bastian is frustrating with his insistence on hiding but his vulnerability and interest in Maddie are touching. Clearly there is room for him to grow and that is a strong part of the story. The glaring short fall was the failure to communicate the danger to Maddie. Also the ending was rather abrupt. Even so, I enjoyed the romance and the fact that the fairly blatant, steamy parts came at the end of the story.

I liked the easy writing and, in spite of some swearing, I enjoyed the overall story.  I do recommend this story to readers who like a sweetly building romance with a sexy ending.


I received this title through Barclay Publicity for an honest review during book tour.

On Sale in Print and Digital: May 19, 2015
Amazon | Barnes and Noble
Add ONCE UPON A SEAL to your TBR pile on Goodreads!

(FYI - I happened upon Book 1 on Kindle - Check to see if it is still available for Free:
Killing Honor (Lucky Thirteen Book 1)


Meet the Military Men of the Lucky Thirteen Series in
Once Upon a Seal by Suzan Butler!
Coming May 19th is the fifth novel in the Lucky Thirteen series, ONCE UPON A SEAL from New York Times and USA Today best-selling author, Suzan Butler! Read how a small town girl starts to change her perceptions after conversations with a reclusive former Navy SEAL. 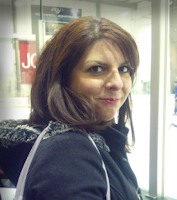 Author Bio: Suzan Butler writes adult contemporary romance and has a penchant for Dr. Pepper, ice hockey, and world domination. She lives in Texas under a not-so-secret identity with two monsters, writing naughty books and planning the next step in her evil plans into the twilight hours of the night because that's when it's quiet in the house. She loves to hear from readers.

Suzan also has a monthly newsletter she shares with her alter ego, New York Times and USA Today bestseller, S.M. Butler, who writes new adult romantic suspense and military romance. In the newsletter, you'll find information about new releases, updates on future books, contests, giveaways, get first peek at new covers, and find out where she'll be visiting through books signings and conventions throughout the year.


Once Upon A Seal by Suzan Butler Excerpt #1
Tommy’s Grocery was the only grocery store in Sugar Falls. We had a lot of older folks that lived out in the country, so I frequently ran out deliveries for them. But as I surveyed the contents of the delivery I had now, making sure I had them all, this wasn’t for one of the older couples, and I hadn’t recognized the name on the order either. Sebastian? It sounded like a younger guy. Why couldn’t a younger guy come get his own groceries?
And it wasn’t a particularly large order either. Lots of fruits, vegetables, a package of razors. So I imagined he was a clean-shaven health nut. Not that I cared either way. I got paid no matter what. And honestly, even though it was hot outside, I still liked getting the fresh air and not being stuck in the store all day.
The house wasn’t a rundown piece of crap like I expected, which was further evidence that it wasn’t an older man. The house was cute, gorgeous and had colorful flowers lining the front porch. Pretty walking stones framed the sides of the circular driveway. The grass was slightly overgrown, but mostly, the yard was well- landscaped. Someone spent hours on it regularly. This was not the work of a landscaper. This house was cared for with love, by someone who liked working with his hands.
Which only made me more curious of the owner.
I got out of my truck and grabbed the three bags from the passenger side. The heat beat down on me as I walked up. I rapped sharply on the door and waited. It was solid oak, with two rectangular window panes spanning half the height of the door. The decorative glass obscured a clear view of the inside, but I could see a vague shape of a man coming toward the entrance to the house.
But the door didn’t open. A gruff voice barked, “Who is it?”
“Maddie Benson. I have your delivery from Tommy’s.” As if for emphasis, I lifted one arm so he could see the shape of the bag through the decorative window.
“Just a sec.” His form moved away. A minute or two passed as I waited for him to return. He came back, and the chain rattled as he unlocked it. I started forward when the door cracked open, but he didn’t let it open. “Leave it on the mat.”
Slowly, I set the bags down. “Okay. Um... It’s twenty-five sixty.” I squinted my eyes to look through the glass, as if that would make it easier to see him.
His hand snaked around the door, holding a twenty and a ten. The hand was large, fitting the massive shape I could make out on the other side of the door. “Keep the change.”
I took the bills from him. “Thanks, um...” I glanced at the ticket in my hand, skimming over it quickly. “Mr. McIntyre.” I stopped. McIntyre? “You’re related to Jenny?”
The door slammed shut in answer.
I glared at the shut door. Wasn’t that just nice. Was this how he treated everyone or was I just special? I almost wanted to knock and tell him what an ---hole he was, but instead, I turned and headed back to my truck.

TOUR GIVEAWAY
Follow the tour and you could win some awesome prizes!

Grand Prize: $25 Amazon or B&N gift card
Runner-up Prizes: Digital copies of any one (1) book by Suzan Butler in the Lucky Thirteen series (except Once Upon A Seal)