Book Review and Giveaways: Passionately Yours (The Hellions of High Street) by Cara Elliott

This is another enjoyable adventure to conclude this engaging series.
Passionately Yours (The Hellions of High Street)
by Cara Elliott 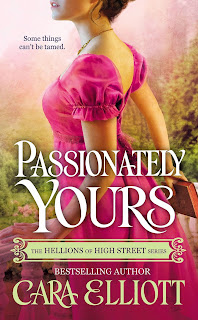 Proper young ladies of the ton-especially ones who have very small dowries-are not encouraged to have an interest in intellectual pursuits. Indeed, the only things they are encouraged to pursue are eligible bachelors. So, the headstrong Sloane sisters must keep their passions a secret. Ah, but secret passions are wont to lead a lady into trouble . . .
PASSIONATELY YOURS
With her older sisters both happily married, Caro Sloane yearns for a romantic adventure of her own. Unfortunately the muddy, sulfur-scented waters of Bath seem the least likely setting for love or excitement. But the aspiring young poet soon finds inspiration when she runs into a familiar-and achingly handsome-Scottish laird.
Visiting Bath with his sickly sister, Alec McClellan is shocked to be reunited with Caro Sloane. He hasn't been able to forget the English beauty since their brief but exhilarating first meeting. But Bath is not nearly as serene as it appears, and soon Alec must protect Caro from a danger that threatens to extinguish the sparks flying between them. Little does he know that a bit of danger is exactly what Caro is looking for . . .


Review:
Caro is the youngest of the three sisters known as The Hellions of High Street. Their father was an explorer who believed his daughters should be as well educated as a son would be. They received a sound scholarly education as well as practical living experiences in how to manage in the wilds and how to escape or fight in dangerous situations. Each of the sisters found a release in writing under male pseudonyms: Olivia pens political essays, Anna publishes adventure romance novels, and Caro writes emotional, passionate poetry.

Caro has had her first season but didn’t meet any man who inspired her interests...except perhaps the summer before when she met the Scottish laird, Alec, with whom she had traded biting exchanges. Now she is in Bath with her mother. Seeking younger companionship Caro has befriended Isobel, who happens to be Alec’s sister.

Alec travels to Bath to visit his sister and is surprised to arrive just in time to rescue Isobel and Caro from an attack by ruffians. Alec has been involved with politics in Scotland but he has broken ties with a group that has turned violent. He suspects that perhaps that group plans to use his sister to threaten him.

Alec is a quite man who has closed his emotions due to a hurt in his past that he doesn’t like to discuss, even with his sister. He enjoys Caro’s unique lively personality and boldness but he believes that she deserves better than a man who has retreated from emotional involvement. Caro, on the other hand, suspects that there is a caring and warm heart lying hidden behind Alec’s scowls and grim demeanor.

Caro overhears a secret conversation that implies danger and violence. She thinks she heard a soft Scottish accent but she is unable to identify the speaker. Caro is wary when another very dashing and charming Scotsman strikes up an acquaintance with her but she is not sure who to believe - this stranger who implies evil danger about Alec, or Alec who refuses to answer her direct questions.

I didn’t find quite the depth in plot in this story as the first two as there seemed to be more focus on the personal tension and less danger and adventure in this tale. Still, once again, I enjoyed the tension between the hero and heroine that is developed with interesting sparks and teasing banter. Ms. Elliot does a lovely job with word phrasing for descriptions and engaging dialogue. There is a background of intrigue and Caro does ultimately get her own dangerous adventure.

This is the third story in the series which could be read as a stand alone. However, I encourage reading the stories in order just to enjoy them all.
Scandalously Yours
Sinfully Yours


I received this title through NetGalley from Hachette/Forever in exchange for an honest review. It adds to my NetGalley Challenge and P in Alphabet Soup Challenge.


About the author: Cara Elliott

Cara Elliott started writing Western novels at the age of five. However, she traded in her cowboy boots for Regency high-top Hessians after reading Pride and Prejudice in junior high school and hasn't looked back. She graduated from Yale University, and she now lives and works in New York City.
Social Media Links:
Website
Facebook
Twitter
Goodreads

EXCERPT:
“One would almost think you were going out of your way to avoid speaking to me.”
“We’re speaking now,” he pointed out.
“I would call it verbal sparring.” Caro edged around impatiently, forcing him to look her in the face. “But now that I have you alone, I’d rather not keep trading thrusts and parries. I would rather discuss far more important matters—such as whether you have learned anything new about the attack on your sister?”
Pursing his lips, Alec shifted his stance just enough to allow him to return to his perusal of the lettering on the column. “Not really.”
“Ye gods.” She restrained the urge to take hold of his arm and give him a hard shake.      “What sort of answer is that?”
“The only one I intend to give,” he replied calmly.
“Fine.” Caro watched the breeze ruffle his long hair, causing a tangle of red-gold strands to curl around his ear and dance down the freshly shaven line of his jaw. The faint scent of bay rum tickled at her nostrils.
“Fine,” she repeated, after forcing herself to exhale. “Then I’ll just have to do a little poking around on my own.”
That got his attention. He looked around abruptly, his gaze narrowing to a slitted stare.    The movement was quick, but not quick enough to hide the sudden darkening of his eyes.
“That wouldn’t be wise,” he growled. “The only thing I will add for now is that you should stay well away from Edward Thayer.”
“Why?”
“Because…” He let out an exasperated grunt. “Must you always plague me with questions?”
“I wouldn’t have to if you would stop treating me like a feather-headed wigeon.”
Alec’s scowl became more pronounced.
“Haven’t I proved myself trustworthy and capable?”
A small muscle on his jaw twitched. “I am not at liberty to give you any more details right now. All I can say is that…” As he drew in a breath, he seemed to change his mind about what to say. “Thayer is a charming fellow. No doubt his smooth words are more to your liking.”
Deciding Alec deserved a bit of teasing, Caro pretended not to notice the roughness edging his voice. “Yes, he’s exceedingly charming.”
If his storm-blue stare squeezed any tighter, it would be sharper than a razor’s edge.
“And scrupulously polite,” she added.
Alec was becoming more flustered. Small sounds were beginning to rumble in his throat, like the growling of a bear. “I do not have Thayer’s gift of making myself agreeable. He has a honeyed tongue, which seems to appeal to all the ladies.”
“Honey is, after all, a great deal more palatable than vinegar,” Caro pointed out.
He now looked utterly nonplussed.
Caro let him stew for a moment longer before huffing an exasperated sigh. “Oh, for heaven’s sake, give me some credit for having a brain, Lord Strathcona! Of course I don’t find Thayer appealing. When honey drips that freely, it ought to catch naught but flies.”
The growls ceased.
Caro waited for him to speak.
Ever so slowly, Alec shifted his feet, stirring tiny puffs of pale dust beneath his boots.
The flicker of dark leather caused a momentary spasm of doubt as she recalled her chilling encounter in the churchyard.
Alec as evil? She couldn’t explain how, but she knew with a certainty that resonated right down to her very heartbeat that it couldn’t be true.
“Are you saying you would trust my word over his?”
“Yes, you big lummox! I don’t know why I should, but I prefer your snaps and growls.”
A dappling of sunlight seemed to catch on the curl of his lashes, gilding them to a gleaming gold.
“You are forthright, you are honorable in your own maddening way,” she went on. Oh, no man ought to have such beautiful eyes.
She found herself staring, and at that moment, all rational thought seemed to dance away in the breeze. His face was utterly intriguing—a mix of chiseled planes and well-defined features that hinted at hidden secrets.
“And… well, you are quite the most interesting man I have ever met.” Her legs suddenly seemed a little unsteady, so Caro reached out and caught hold of his lapels.
Looking up, she found his mouth was only inches from hers.
“Oh, bosh—I shall probably regret this…” Standing on tiptoes, Caro kissed him. Not a mere feathering of flesh against flesh, but a hard, hungry embrace that she let go on for far, far longer than any proper young lady should dare.
“There, I have no doubt shocked you.”
The tip of his tongue traced along the swell of his lower lip.
“I imagine you think me a wanton hellion, and I suppose I am. It must be my eccentric upbringing. I don’t care very much for rules.”
Caro knew she was babbling but she couldn’t seem to stop. “You may consign me to the Devil. But at least I shall dance a merry jig on my way to perdition.”
Was that finally a hint of smile?
She finally dared pause to take a breath. A long, shuddering breath. Now was the time to flee, before she made an even bigger fool of herself.
But Alec suddenly shifted again, blocking her way.
“I, too, shall probably regret this,” he said as he slowly circled his arms around her and pulled her close.
She opened her mouth. To protest?
Before she could make any sense of what she had set in motion, their lips met again, setting off a fierce jolt of fire.


BONUS GIVEAWAY
ONE PRINT COPY (US/Canada only).
Graciously provided by the publisher:

(Don't forget to fill in the form for entry!
I have noticed a few commenters who forgot to enter through the Form.)
For 2 Extra Bonus entries (a) comment on the review,
OR
(b) visit THE AUTHOR'S WEBSITE and tell me something you like/learned there
OR
(c) Tell us in the comment what bent your writing would take? Essays? Novels? Poetry? Other?

* This contest is open to US/CANADA only for Print Copy.
* This contest will close 5 PM (Central) June 6, 2015.
WINNER WILL BE ANNOUNCED after June 6, 2015.
Winners will have 72 hours to respond on the winners form linked in the announcement or by email.
Posted by Martha Eskuchen at 12:51 PM