One of my favorite, collectible authors delivers a 'priceless romance'. 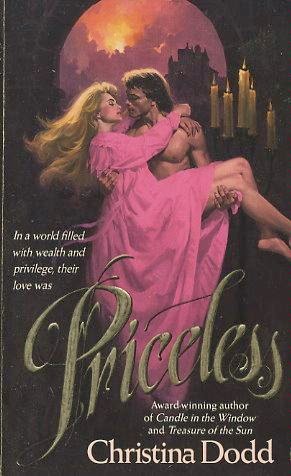 Book Description
Publication Date: March 17, 2009
Headstrong and adventurous, Bronwyn Edana regularly stuns polite society with her reckless exploits. But there is one type of exploit the fiery beauty has never experienced. Still innocent when it comes to men and their roguish ways, she can barely believe the breathless desire she has begun to feel for Adam Keane, a distinguished nobleman and a man with more than his fair share of liaisons in his past . . .
Now branded by a haunting tragedy, Adam will not rest until he lures Bronwyn to his bed. When a shocking conspiracy threatens their lives, he'll bring her from the dangerous streets of London to the sweeping countryside—for he has seen enough of the world to know that a passion like theirs is priceless.


Review:
Bronwyn is one of the reknowned Edana sisters, but being short, full and blonde, she has always felt clumsy and drab next to her tall, sleek, black haired, stunning sisters. Bronwyn favors scholarly pursuits rather than the “social graces” of needlepoint, music and dance. Bronwyn’s charming, spendthrift father has arranged a marriage to exchange Bronwyn, as an 'Edana bride', for funds to refill his pockets.

Adam Keane is a handsome nobleman who is determined to restore his family reputation. Adam’s father was hanged as a counterfeiter leaving his mother struggling to stay out of the poor house. Adam has worked hard and made smart investments building his wealth. Now he believes a high born bride will help secure his re-entry into society.

Initially Adam is disappointed to meet his fiance who looks like a brown wren wrapped in over-sized clothes and an ugly wig. He is soon pleasantly surprised by her staunch spirit, the sparkle in her eyes and the curves he discovers under her ill-fitting clothes. He is even impressed by her intelligence although he sarcastically belittles that by a comment that Bronwyn overhears.

Bronwyn runs off to stay with a friend who maintains a scientific salon. Madame Rachelle helps Bronwyn uncover her own beauty and she becomes the mysterious, seductive ‘Cherie’. Another young lady is jealous and reveals Bronwyn’s true identity to an enemy who has reason to fear Bronwyn may know his secrets.

Adam has been asked to spy out a plot involving the South Seas Trading Company. He is distracted trying to find Bronwyn and when he locates her he is set to win her in his bed and in his life. Their relationship grows but there are difficulties. Bronwyn’s parents replaced Bronwyn’s more timid younger sister, Olivia, as the promised bride. Adam can’t cry off the wedding without ruining all of their reputations. Even worse, Adam’s reputation is already being muddied by an enemy who has framed Adam as a man passing forged stock certificates.

I loved Bronwyn’s strong, independent character and her transformation from ugly duckling to beautiful swan. I also liked Adam’s fierce integrity and the vulnerabilities he hides behind his brooding countenance. I found the plot wonderfully engaging with the romantic tension, the dangerous stock conspiracy and a strikingly ugly, bitter and vengeful villain. Several of the other characters add to the story too, including Bronwyn’s parents and Adam’s irrepressible mother, Mab.

The reading was smooth and fast paced. I was surprised by the range of ratings for the book at Amazon. It appears that readers either were captivated, like me, or found the book totally lacking. This is one of Dodd’s earlier works so the romance is sensual and not steamy which suits me fine. This reminded me why Christina Dodd is a favorite author of mine and why I collect her titles.

For the first time since she'd lived in his house, he smiled. He smiled at her. Her breath caught. She froze. The man she'd thought of as severe, austere, a maiden's vampire fantasy, transformed himself into a wicked highway-man, waiting to rob her of her good sense. Their eyes locked. Page 61.

Yet he'd never imagined a woman like Bronwyn. From the first moment they'd met, she'd upended his expectations. She'd broadsided him with surprises, and he feared he wasn't the ice man he had previously believed. His mother claimed he wasn't cold, that he wore a mask, and he'd denied it vigorously. Page 109.

I picked this title from one of my collections.
Giveaway:
I can't bring myself to part with my 1992 print paperback so I am going to share an eBook copy.
ENTER THIS GIVEAWAY an eBook copy
Kindle, Nook or ebook versions available at Google (priced at or below $6.00)

ENTRY FORM HERE
(Don't forget to fill in the form for entry!
I have noticed a few commenters who forgot to enter through the Form.)
For 3 Extra Bonus entries comment on the review, OR
visit THE AUTHOR'S WEBSITE and tell me something you like/learned there.