Book Review and Giveaway: Every Time I Love You by Heather Graham

Every Time I Love You
by Heather Graham 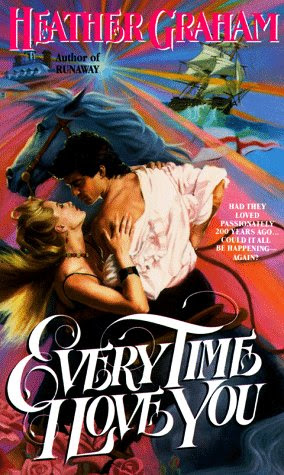 Genre: Contemporary Romance, with Historical Elements
My Rating: 4.0 of 5.0

Every Time I Love You is the captivating tale of a modern couple and their struggle with ill-fated past lives.


Review:
Gayle Norman is a modern woman who had a college romance that ended in tragedy when her temperamental boyfriend overdosed. Since then she has focused on her career as an assistant and event coordinator for Sabel Gallery, a well known artist gallery in Richmond, Virginia. Gayle keeps her distance from men even though her friends think it’s time to find a man to date.

Brent McCauley is an intense, reclusive artist who has agreed to have a showing at Sabel Gallery. His works consist of a group of nudes, including two entangled lovers. Gayle is impressed with the strong evocative feel of the painting.

Brent and Gayle meet and the connection is instant, intense and undeniable. Although it is not her usual behavior, Gayle ends up going home with Brent. Soon they are inseparable and planning their wedding. Gayle begins to have some dark dreams where she is drawn to a man who looks like Brent but she is terrified of him. She can’t really remember the dreams but feels a disquiet.

At the wedding Gayle passes out and after the wedding the dreams increase to the point where Brent insists she seek professional help. She agrees although that doesn’t help much. Then Brent begins to act in unexplaned, angry and violent episodes that he doesn’t remember. Gayle is frightened but Brent refuses to seek help because it might have a bad impact on his reputation.

Interspersed with these modern chapters are chapters set in 1774 introducing Percy Ainsworth, a young American rebel and Lady Katrina Seymour, the sixteen year old sister of a staunch British Tory. These two are at extremes politically but their attraction is explosive.

The conflict in the story stems from Percy’s belief that Katrina betrays him. Gayle and Brent are struggling with the strange flashes they are experiencing. But how can they figure out what is happening especially if Brent refuses outside help?

I had picked this story from my TBR pile because I wanted something involving the American Revolution. Although this had small portions of the Revolution the story is really a double romance. The modern characters are well developed and likable although I had difficulty with the impulsive, contrary traits of the 1774 couple. The romance between Gayle and Brent is very nicely handled. The ‘reincarnation’ aspects of the story added the focal interest even if I have mixed feelings about that theory. The book started a bit slowly but by midway I was anxious to keep reading. The writing is strong and engaging and I recommend this to those who love entertaining romance.


This story was from one of my TBR author collections.

Giveaway:
ENTER THIS GIVEAWAY for my 1988 Print paperback

ENTRY FORM HERE
(Don't forget to fill in the form for entry!
I have noticed a few commenters who forgot to enter through the Form.)
For 3 Extra Bonus entries comment on the review, OR
visit THE AUTHOR'S WEBSITE and tell me something you like/learned there.

* This contest is open to U.S. address only for print book.
* This contest will close 5 PM (Central) August 2 2014.
WINNER WILL BE ANNOUNCED after August 2, 2014.
Winners will have 72 hours to respond by email or the winners form linked in the announcement.
Posted by Martha Eskuchen at 11:00 PM