Book Review and ARC Giveaway: Deliver Me From Temptation by Tes Hilaire

I really like the heavenly guardians and the action in this series.
Deliver Me From Temptation: A Novel of the Paladin Warriors
Tes Hilaire 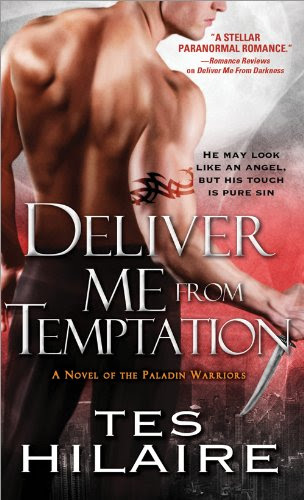 Book Description
Publication Date: December 4, 2012
"Dark, sexy, and intense! Hilaire blazes a new path in paranormal romance."—Sophie Jordan, New York Times bestselling author on Deliver Me From Darkness
Logan Screwed Up...Big Time
When things go bump in the night, Logan bumps back. Vampires, demons, succubi—you name it, he's fought it. His job as Paladin angel warrior is to protect humans. Not fall for one.
She Never Believed in Divine Intervention...Until Now
Detective Jessica Waters protects humans too-with her Glock and a good set of handcuffs. She doesn't believe in fate. But if anyone looks like a gift from the gods, it's Logan. And he clearly knows more about her case than he's letting on...


Review:
Jessica is a fierce cop whose driving force is the anger and hate that she carries from the rape and brutal death of her twin sister. She is a good and dedicated cop but sometimes her anger pushes her to take risks like investigating without her partner for backup.  She has been pushing pretty hard on a murder that involved some freakish aspects. High on Jessica’s lists of suspects is Roland, a Paladin Warrior (heavenly protector) who is outcast from the ranks because he is now a vampire.  (See Roland’s story in Deliver Me From Darkness.) Roland is not the murderer, but there are other vampires and dark forces involved in the murder.  They object to Jessica’s snooping and she is now a target.

While investigating, Jessica sees Logan and Alex, two Paladin Warriors, chasing what appears to be an innocent woman. Jessica tries to challenge the men, interfering with their efforts and gaining a memory wipe for her troubles.  Jess doesn’t remember Logan and Alex when she next meets them at the station while they are bailing out Roland. She suspects something isn’t right but doesn’t know what.

Now Logan is set on protecting Jessica as she continues to bump into bad, dark things in the night. Their attraction is intense. She tries to resist as he is a “person of interest” in the case and she can’t really believe in forces he alludes to. Logan realizes that, as the future leader of the warriors, there is no way he should get involved with a human. There union may be beyond their control! But can Logan keep Jessica alive as she is dragged in by enemies to lure him to a trap?

Logan is a great, strong hero who is dedicated to his mission but sometimes challenges the Paladin leader, his father, because of his old-fashioned and limiting methods. Jessica is a wonderfully strong and dedicated officer although her independence and hatred get her into trouble. I really like the action in this series. The book jumps off with a start and never lets up. I also love the fact that the heros are heavenly warriors protecting humans from demons and other evil creatures.  My only hesitation and disappointment in the series is the free use of foul language. Too bad that mars the rest of the great work for me. I did pick this book to review knowing from the last time that it would likely have language. Still - the action and story outweigh the negative language. I’m glad I read this and I recommend the series to those who love strong characters, intense passion and plenty of action.


[The station house} was more than just a place for the work of law to get done. It was the line between human goodness and evil deeds, a sanctuary to Justice’s warriors. But without faith in...something? Could that line really be held? Could Justice survive.   Page 64.

I really liked this imagery:


She made her way down the side street, the sounds of the investigative team playing like a homicide-cops urban symphony.  The clicking of a camera was the erratic drummer, the scuff of boots on gritty pavement the counter beat and the gruff voices lowered in funeral hall tones claimed the melody.  Page 119.

I received this from Sourcebooks for an honest review.

TO ENTER THIS GIVEAWAY for the ARC Copy.

* This contest is open US and Canada.
* This contest will close 10 PM (Central) on December 14, 2012.
The winner will be randomly selected from all entries.
WINNERS WILL BE ANNOUNCED on December 15, 2012.
Winners will have 72 hours to respond by email or the winners form linked in the announcement.
Posted by Martha Eskuchen at 10:03 PM