I have had a rough week with a feverish cold. I think it is starting to break up so hopefully this coming week will be better.

I finished four books last week but only posted three reviews as I was going to bed early. I will have to catch up a bit this week on the reviews.   I had one tour book last week with a giveaway link plus I posted the regular Friday Pick Giveaway, Saturday Sharing Beyond Books Comment Giveaway and Sunday Words.

I did get to visit a bit last week and hope I will get to do do again tonight before I crash once more. :-)
I truly appreciate all the nice people who visit me.

I liked parts of this but was disappointed overall. I will post a review early this coming week. This is from my Audible Library.

A Man of Honor: First Responders Book #3
by Loree Lough
I enjoyed this alot.
The review, part of tour,  is linked above.

Kiss of Steel
by Bec McMaster
This is fast paced reading.
Review and Interview to post
with Giveaway September 25, 2012. (Sourcebooks)
Book Description
Release Date: September 1, 2012
"Action, adventure, steampunk, and blazing hot seduction...Bec McMaster offers it all."—Eve Silver, author of Sins of the FleshA brilliantly creative debut where vampires, werewolves, and clockwork creatures roam the mist–shrouded streets of London...
When Nowhere is Safe
Most people avoid the dreaded Whitechapel district. For Honoria Todd, it's the last safe haven. But at what price?
Blade is known as the master of the rookeries—no one dares cross him. It's been said he faced down the Echelon's army single–handedly, that ever since being infected by the blood–craving he's been quicker, stronger, and almost immortal.
When Honoria shows up at his door, his tenuous control comes close to snapping. She's so...innocent. He doesn't see her backbone of steel—or that she could be the very salvation he's been seeking.


Line Edits: I am working on more formatting this week. 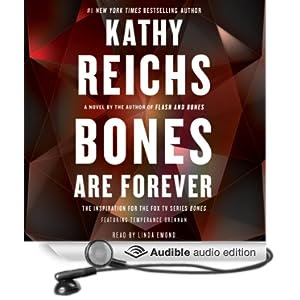 Bones Are Forever: A Novel (Temperance Brennan)
Kathy Reichs (Author), Linda Emond (Reader)
I had read or listened to books 1-12 in this series. This is Book 15 and I was pleased to get it from Simon & Schuster through Audiobook Jukebox.
Book Description
Release Date: August 28, 2012 | Series: Temperance Brennan
Kathy Reichs, #1 New York Times bestselling author and producer of the Fox hit series Bones, is at her brilliant best in a riveting novel featuring forensic anthropologist Tempe Brennan—a story of infanticide, murder, and corruption set in the high-stakes, high-danger world of diamond mining.

Temperance Brennan has been asked to examine the corpses of three dead babies in Montreal. It’s a difficult assignment, complicated further by the fact that her long-time flame Detective Ryan is investigating the infants’ mother, a former (and possibly current) prostitute. When the woman flees to Edmonton, the investigation is joined by Royal Canadian Mounted Police sergeant with whom Tempe had an ill-advised fling over a decade earlier. The dissonant team heads to remotest Yellowknife—mining country—to pursue an ever more sinister trail.

With the Fox series Bones in its seventh season and her popularity at its broadest ever, Kathy Reichs reaches new heights in storytelling and suspense-building. Bones Are Forever shimmers with sexual tension, crackling dialogue, and the thrilling twists Reichs delivers so well.

Power
by Debra Webb
I just started this and it is strong characters already.
Reviewing for Forever/Hachette.
Book Description
Release Date: March 26, 2013
Agent Jess Harris is back in another thrilling installment of Debra Webb's Faces of Evil series.

Jess is ready to start the next chapter in her life as the new deputy chief of Birmingham's major crimes division. But with her first love, Chief of Police Dan Burnett, acting as her new boss, it looks like Jess won't be able to put the past behind her that easily.

Jess has decided to focus all of her attention on work when a celebrated ballet instructor is found dead by one of her students. Though Jess's instincts tell her otherwise, the death is ruled an accident, and the case is assigned to another division. Still, Jess can't shake the feeling that there's more to the story, and her investigation leads her into the worlds of Birmingham's gang culture and its powerful elite.

Now Jess's investigation has dug a little too deep, and there's a target painted on her own forehead. Will she be able to solve the crime before her own life is in jeopardy?

When You Give a Duke a Diamond (Jewels of the Ton)
by Shana Galen
I expect to start this tomorrow. Reviewing for Sourcebooks.
Book Description
Publication Date: September 1, 2012
HE HAD A PERFECTLY ORDERLY LIFE...
William, the sixth Duke of Pelham, enjoys his punctual. securely structured life. Orderly and predictable—that's the way he likes it. But he's in the public eye, and the scandal sheets will make up anything to sell papers. When the gossips link him to Juliette, one of the most beautiful and celebrated courtesans in London, chaos doesn't begin to describe what happens next...

UNTIL SHE CAME ALONG...
Juliette is nicknamed the Duchess of Dalliance, and has the cream of the nobility at her beck and call. It's seriously disruptive to have the duke who's the biggest catch on the Marriage Mart scaring her other suitors away. Then she discovers William's darkest secret and decides what he needs in his life is the kind of excitement only she can provide...

I am again listening to The Listener's Bible NIV read by Max McLean.

[Reading and listening on my new MP3.]
Instead of studying with the Tyndall One Year Bible this year I am studying with Through the Bible in One Year by Alan B. Stringfellow. It is a Study that I used for teaching back in around 1989 so I will enjoy it again.  This week the reading is Philippians.

Line Edits: I am working on more formatting this week.

I thought I had selected fewer titles for September but there are already 17 in the starting list which means five per week continues.   I have read 10 from the list; 12 for the month so far.

Scheduled for September:
9/25 Kiss of Steel by Bec McMaster - Review and Interview (Sourcebooks)

Blades of Winter: A Novel of the Shadowstorm by G. T. Almasi
(Possibly one more)

The Aleppo Codex: A True Story of Obsession, Faith, and the Pursuit of an Ancient Bible by Matti Friedman
Bones Are Forever Kathy Reichs

Authors
Risking it All by Suzanne Barrett

[To be posted - I am setting these up for interview/feature days. These were read and ready for reviews for Authors.
Quest for Magic by Jean Hart Stewart - Read; review to be posted with interview.
Seeing for the First Time (What You See is What You Get)

and To See (What You See is What You Get)

by Nicole Zoltack - Both Read; setting up author interview with reviews.]
Posted by Martha Eskuchen at 7:25 PM