Book Review with Giveaway: When You GIve a Duke a Diamond by Shana Galen

I wasn’t sure when this started but it turned out to be fun, quick and enjoyable. 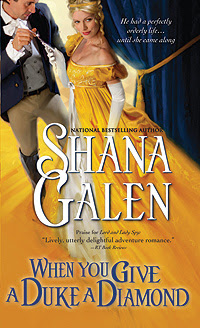 
Book Description
Publication Date: September 1, 2012
HE HAD A PERFECTLY ORDERLY LIFE...
William, the sixth Duke of Pelham, enjoys his punctual. securely structured life. Orderly and predictable—that's the way he likes it. But he's in the public eye, and the scandal sheets will make up anything to sell papers. When the gossips link him to Juliette, one of the most beautiful and celebrated courtesans in London, chaos doesn't begin to describe what happens next...

UNTIL SHE CAME ALONG...
Juliette is nicknamed the Duchess of Dalliance, and has the cream of the nobility at her beck and call. It's seriously disruptive to have the duke who's the biggest catch on the Marriage Mart scaring her other suitors away. Then she discovers William's darkest secret and decides what he needs in his life is the kind of excitement only she can provide...


Review:
Juliette, dubbed the Duchess of Dalliance is one of the Three Diamonds - three beautiful courtesans in London. She works hard to maintain that image as it helps her keep her classy life-style. Having the local gossip column pair her with the uptight Duke of Pelham, also known as the Dangerous Duke, isn’t necessary helpful.  And she hasn’t even met him yet!

William is called the Dangerous Duke because he has a way of giving an imperious eye in challenge to others to keep them in their place. His life is one of ducal dignity, regimented routine and set schedule, not to be varied.  He has decided on a biddable, proper wife who will suit his orderly and respectable image. He doesn’t realize that Lady Elizabeth may not be as proper as he believes her to be.

Duke William has agreed to make a rare appearance at a ball with Lady Elizabeth as he intends to announce their engagement. Juliette decides this would be a good time to meet the Duke and slides up to “Prinny” for an introduction. When the Duke gives her a cut she ducks outside to gather her composure in the shadows. There she witnesses a terrible event involving the Duke’s betrothed.

Even though the Duke doesn’t believe Juliette’s tale, she must seek his protection when it appears that a murderer is coming to silence her.  Her real fright draws out the protective instincts of the Duke. He fully plans to resist her beauty as a liaison with a courtesan is totally inappropriate for his Ducal line.  Yet her vitality and sincere feelings turn his world upside down.
Can Juliette convince him to break away from his mold and routine before her heart is broken and before she her reputation is completely ruined and she is left with nowhere to turn for safety?

I didn’t like Juliette at first introduction but her character is soon revealed to be so much more than a frivolous flirt. William is a very staid British Duke but Juliette is able to see beneath his austere shell to the hurt and restricted boy within.  I enjoyed how Ms. Galen revealed the histories and true characters of this pair.  Although the story is focused on the romance, there are threats and danger that keep the story interesting beyond just the romance. The romance itself is rather fun as Juliette and the Duke learn to be a bit adventurous.

This is another fun and warm romance from Ms. Galen. A good choice for those who love historical romance with a bit of danger, attraction between an unlikely couple and a romance with fun sizzle.


But his hair... that hair would not cooperate with his attempts at order and rigidity.  It had a stubborn streak, an unruly streak.
She like it. It gave her hope.   Page 91.

It was nigh eleven. His daily routine was shot to hell. Considering he now had a dead footman, a scared courtesan, and a cryptic note on his hands, he didn’t think his day was going to improve.  Page 124.

Love was not ordered or disciplined. Love was not logical or stately. Love made fools of everyone it touched.  Page 315.

Thank you to Sourcebooks for providing this book to read and review.

TO ENTER THIS GIVEAWAY for the ARC Copy:

For 3 Extra Bonus Visit the author's website and tell me something you find of interest.

* This contest is only open to residents of US and Canada.
* This contest will close 10 PM (Central) on October 5, 2012.
The winner will be randomly selected from all entries.
WINNER WILL BE ANNOUNCED on October 6, 2012.
Winners will have 72 hours to respond by email or the winners form linked in the announcement.
Posted by Martha Eskuchen at 8:40 PM

Email ThisBlogThis!Share to TwitterShare to FacebookShare to Pinterest
Labels: Book Review, Historical Romance, Review, Shana Galen, Sourcebooks, When You Give a Duke a Diamond