This is a detailed Scandinavian crime mystery with the portrayal of a strong female inspector. 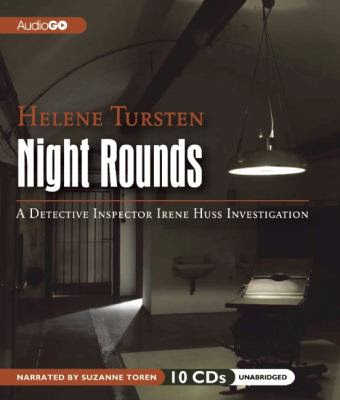 
Book Description
Publication Date: February 14, 2012 | Series: Inspector Irene Huss
Irene Huss is a former Ju-Jitsu champion, a mother of twin teenage girls, the wife of a successful chef, and a Detective Inspector with the Violent Crimes Unit in Goteborg, Sweden. And now she’s back with a gripping follow-up to Detective Inspector Huss.

One nurse lies dead and another vanishes after their hospital is hit by a blackout. The only witness claims to have seen Nurse Tekla doing her rounds, but Nurse Tekla died sixty years ago. Detective Inspector Irene Huss of the Violent Crimes Unit has the challenge of disentangling wandering ghosts and complex human relationships to get to the bottom of this intriguing case.

A cult hit in its first three installments, the Irene Huss series is available once again for English-language fans.


Review:
This is a crisply written, dramatic mystery rather than a fast paced, exciting thriller.  I say dramatic as the author describes, with clean detail, the characters, settings and events. The mystery begins, carries and closes out the book but the clues, suspects and her colleagues are woven through the day to day investigation and the day to day living activities of Inspector Irene Huss. These activities including her husband and children aids personal depth to character of the Inspector and make her a real and more likeable character.

Although the investigators do not say so right away, it seems fairly clear that the murderer must have dressed up to appear like the hospital ghost, Nurse Tekla. The witness of the “ghost” as the murderer lends additional mystery as Inspector Huss has to unravel the intertwining connections between the 60 year old ghost, the current murder victim, the missing nurse and those remaining persons of interest who might have motive and opportunity.

I wouldn’t say that the story moves along quickly as there is a good bit of detail in the telling of the daily progress. I enjoyed the detail and didn’t feel that the story was bogged down or dragging. It just is a different, methodical presentation which may be connected to the Scandinavian investigative process. I liked how the clues add up until the perpetrator is exposed. Apparently this is part of a series but it was easy to follow as a stand alone.

The narrator's reading is suited well to the methodical pacing.   Susanne Toren narration is precise, giving  just a bit of accent as fits the different characters.  I would enjoy listening to this narrator again and reading or listening to more mysteries by Ms. Tursten.


Thank you to AudioGo who provided this title for review through Audiobook Jukebox.
Posted by Martha Eskuchen at 6:54 PM