I found this story quite engaging and remarkable and am very glad I picked it up through NetGalley. 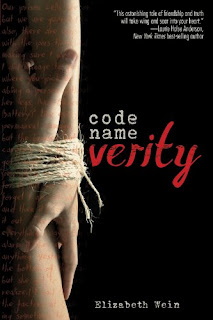 
Book Description
Publication Date: May 15, 2012
When “Verity” is arrested by the Gestapo, she's sure she doesn’t stand a chance. As a secret agent captured in enemy territory, she’s living a spy’s worst nightmare. Her Nazi interrogators give her a simple choice: reveal her mission or face a grisly execution. But will trading her secrets be enough to save her from the enemy?

Review:
As the book editor intro says: This is a story about friendship, hope and survival.  The book is designated as reading for 9-12 grades and I would say it would be wonderful for those grades but it is wonderful for adults too.

The story is about two young women who are best friends during World War II. “Verity” is a Scottish aristocrat, aka Queenie, and she and her brother, Jamie, are part of the war effort. Maddie is from the working class and has a knack for mechanics and navigation. Verity is a WAAF (Women’s Auxiliary Air Force) wireless operator and Maddie is a part of the civilian Air Transport Auxiliary.  Maddie is an excellent amateur pilot with more experience than many of the young boys going off in the RAF. Women are not yet accepted as war or night time pilots although those around Maddie quickly realize that she is better than many of the official pilots. They indulge her and in fact challenge her to fly several dangerous missions in spite of her great fear of guns and bombs.

The remarkable thing about this story is that it is told through journal entries. Verity is to be flown at night into France for a crucial mission. Her pilot fails to arrive and Maddie is pulled in to make the flight. They are hit by gunfire and Verity has to bail before Maddie attempts a crash landing. Verity is caught almost immediately and begins a series of confessions to stay alive in the German headquarters at Oramie, located in the once beautiful hotel known as the Chateau de Bordeaux.

The first half of the book is Verity’s written confessions, revealing wire operator codes, airplanes and air field locations woven through her description of how she met Maddie, how their friendship developed and how it came about that they crashed. Verity’s writing efforts, between torture and threats, are overseen by a German doctor, Fraulein Engel, who translates the papers for the leader, Captain von Loewe. At points Verity’s entries are rambling, sometimes bold and abusive regarding her enemies and captors, sometimes self-deprecating, bemoaning her own cowardice, and sometimes despairing her own fate and that of Maddie.

The second part of the book are Maddie’s journal notes. She describes her crash, how she is hidden with a resistance family and how the mission is handled once they learn that Verity has been captured. There are surprises, twists and unexpected connections.  The story espresses joy in loyal friendships, bravery in times of duress and strength through tragedy.

The writing style is easy to read. Although torture and atrocities are implied there are only a few truly brutal descriptions; nothing that older students couldn’t handle. The first few pages took a bit to orient but once I realized where Verity was and what she was doing I was completely engaged.  There is emotion and excitement that move at a good pace. I appreciated the literary technique used by Ms. Wein as well as the visual portrait of the war and resistance dangers she is able to paint in words.

I haven't read a lot of fiction or nonfiction about WWII and this book is a good step into that era, especially as it relates to female involvement in perhaps peripheral (not front line battles), but still very important, war efforts. You do not have to be a 'war buff' to enjoy this story which is more about personal dreams, losses and relationships in a war-time setting.  Definitely worth the reading!

I selected this to review through NetGalley.
I will add this to my TBR and New Author reading challenges.
Posted by Martha Eskuchen at 12:57 PM