I would like to read more by this author.
Kingdom of Summer 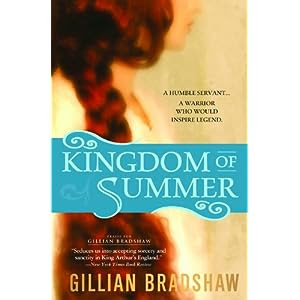 
Product Description:
On the path toward greatness, even a hero makes mistakes.

Armed with his magical sword and otherworldly horse, Gwalchmai proves himself the most feared and faithful warrior of Arthur's noble followers. But while defending the kingdom, he commits a grave offense against the woman he loves, leading her to disappear from his life and haunt his memories.

With his trusted servant, Rhys, a commonsense peasant, Gwalchmai tries to find her in the Kingdom of Summer, where Arthur has sent him. But an unexpected and most malevolent force of evil and darkness is loose-that of his mother, the witch-queen Morgawse-and Gwalchmai finds that the secrets of his past may deny him peace...

Review: I really enjoyed the tone and compelling story.

This story is told by Rhys, a young farmer in the lands south west of Camlann - known to most of us as Camelot. On a cold winter day a weary and injured stranger arrives with a beautiful warhorse and shining sword.  Rhys soon learns this is Gwalchmai, a famous warrior in King Arthur’s “family.” As Gwalchmai takes a few days to heal he enchants the family with a tale of sorrow and mistake from his youth.  Gwalchmai is traveling the countryside, even in winter, seeking a young noblewoman so that he might ask her forgiveness for the wrongs he committed against her.

Rhys is drawn to what he sees as the nobility and perhaps glamor of serving the great King. He offers to go with Gwalchmai as his servant.  Traveling with the determined warrior is hard going even though Gwalchmai is kind and undemanding. In fact Rhys begins to bargain for their lodgings and supplies when he realizes that Gwalchmai is too distracted by his ponderings to take a care for basics.

After a month or so at Camlann, Arthur sends Gwalchmai north as an emissary to an enemy King. Rhys and another warrior, Rhuawn, travel with him.  They pass through the beautiful lands of the Kingdom of Summer, the otherworldly place where Gwalchmai got his magical and deadly sword.

When they arrive at the enemy fortress Gwalchmai is startled to discover that his father, a weakened leader, his sorceress mother, Morgawse, and his half brother, Medraut, are visiting. Apparently Queen Morgawse is plotting with the enemy, King Maelgwn.  Gwalchmai is civil but it is clear that the relationship with his mother and brother is strained.

Medraut uses charm and subtle lies to confuse Rhuawn into thinking Gwalchmai is mad. Rhys’ fierce loyalty to Gwalchmai keeps him from falling to Medraut’s deception. Rhys is captured and tortured by the sorceress but escapes with the help of a serving maid he had befriended. He is re-captured and returned to the evil Queen where he witnesses a mystical battle between the Light of Gwalchmai and the Darkness of Morgawse.

There is a distinctly “otherworldly” tone to the writing and story. I felt sorrow for Gwalchmai’s tortured character and I liked how Rhys displayed his own nobility and honor through his unshakable loyalty. The story was slightly slow at the beginning but the desire to know what happened compelled me to keep reading. I was sorry when it ended and I hope the third book tells more about these characters. This was fine as a stand alone as I had not read the first book in the trilogy.

A favorite quote - Rhys contemplating the state of the world beyond his home:
"A complicated world, where to act might be to act wrongly, and not to act even worse."

~~~~~
I received this book from Sourcebooks for an honest review.

TO ENTER THIS GIVEAWAY for the ARC copy:
1. Visit the author's website and tell me something of interest you found there. This is required for entry.
1982 Cover

2.  For and extra entry, tell me which cover you like best: the Amazon cover shown at the top of the post, the ARC cover to the right just above or the 1982 cover to the left.

3.  For an extra entry, become a follower or tell me if you are already a follower.

4. For two entries, blog, facebook, tweet (any of those networks!) about this giveaway and tell me where you did.

It isn't necessary to use separate entries unless you want them in different chronological order.
(Five total entries possible.)


* This contest is only open to residents of US and Canada.
* This contest will close 10 PM (Central) on September 30, 2011. (This month's book giveaways will all end on the 30th except for Friday Picks, SBB or other special posts.)
The winner will be randomly selected from all entries.
The WINNER WILL BE ANNOUNCED between October 1 and 3.
Winners will have 72 hours to respond by email or the winners form linked in the announcement.
Posted by Martha Eskuchen at 6:30 AM