I enjoyed a Resurrection Sunday School message that the empty grave and Christ’s appearing to many proves his message of hope and restoration! The sermon message was similar message. We prayed for local and world needs and issues. We welcomed more new members which is always a lovely thing!

Our (Interim) Pastor recognized that it is a Special Day and shared his sermon titled: What Has Christ Conquered? The primary scripture is 1 Corinthians 15:12-19.
Pastor also noted that Resurrection is the proof of Christ's forgiveness and promise of restoration.
The tomb is empty.
Religious leaders, trying to protect their own powers and control over people, lied and bore false witness.
Christ entered the city on a donkey as a king of peace and not as conquering king on a war horse.
Religious leaders stirred the crowd to seek crucifixion.
In truth Christ came as a conquering king for future but also a king today.
Here are three things Christ conquered.
1. He Conquered Death. Matthew 28:1-8. 1 Corinthians 15:23- 26 Christ is the first fruits and the last death. v50-57. We win!
2. He Conquered the devil. Matthew 12:40. Hebrews 2:14-45. Revelation 1:18 Jesus has the keys of death. The enemy is limited and his time is short.
3. He Conquered doubt. Who is this? Matthew 28:6-10, 17. Some did not believe. Mark 16:11-14. Luke 24:21-27. They did not know the scripture. John 20:9-10. John gave testimony that others would believe! John 20:26-31.

Don’t doubt. Believe that Christ conquered death and the devil!

Christ is risen! He is alive and He is our Living Hope! 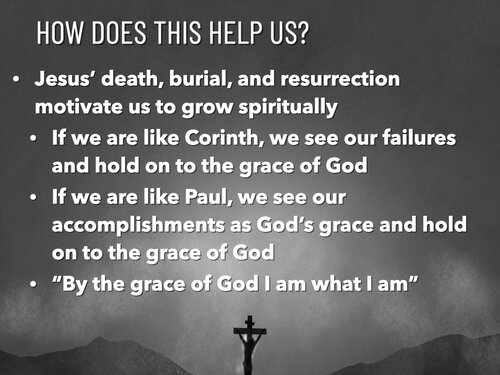 Posted by Martha Eskuchen at 11:00 PM