Audible Book Review: The Girl Who Drank the Moon by Kelly Barnhill

This is a wonderfully entertaining story that champions Hope!!

The Girl Who Drank the Moon
Written by: Kelly Barnhill
Narrated by: Christina Moore 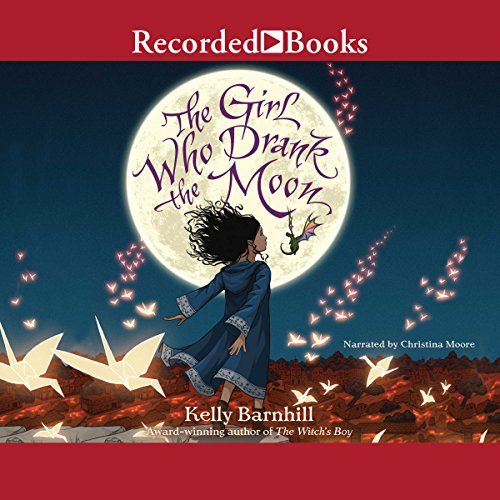 
Publisher's Summary
A young girl raised by a witch, a swamp monster, and a Perfectly Tiny Dragon must unlock the dangerous magic buried deep inside her in this epic coming-of-age fairy tale from the highly acclaimed author of The Witch's Boy.
Every year the people of the Protectorate leave a baby as an offering to the witch who lives in the forest. They hope this sacrifice will keep her from terrorizing their town. But the witch in the forest, Xan, is kind and gentle. She shares her home with a wise Swamp Monster named Glerk and a Perfectly Tiny Dragon, Fyrian. Xan rescues the abandoned children and delivers them to welcoming families on the other side of the forest, nourishing the babies with starlight on the journey.
One year Xan accidentally feeds a baby moonlight instead of starlight, filling the ordinary child with extraordinary magic. Xan decides she must raise this girl, whom she calls Luna, as her own. When Luna approaches her 13th birthday, her magic begins to emerge on schedule - but Xan is far away. Meanwhile, a young man from the Protectorate is determined to free his people by killing the witch. Soon it is up to Luna to protect those who have protected her - even if it means the end of the loving, safe world she's always known.
The acclaimed author of The Witch's Boy has created another epic coming-of-age fairy tale destined to become a modern classic.
©2016 Kelly Barnhill (P)2016 Recorded Books


Review:
The people in the town of the Protectorate are under a dark sorrow as each year they leave a baby as an offering to the witch in the forest. They’ve been told by the elders and the sisters that this sacrifice keeps the witch from destroying the town and keep it safe from the nearby volcano. No one ever dares watch what happens to the infant so they don’t know that there really is a witch, Xan, who ‘rescues’ the children and takes them to safe, welcoming families in other cities.

One year, Antain, an boy serving as an elder-in-training, accompanies his uncle, The Grand Elder, to pick up the child from the parents. The mother is clearly unhinged at the thought of giving up her baby and the Elders have to take the child by force. The mother is then locked away in the tower of the sisterhood. The event of witnessing the distress of the mother and the abandonment of the infant traumatizes Antain who can’t forget the mother or the child.

Xan retrieves the baby, but on the way to another town she accidentally enmagics the child with moonlight instead of just starlight. Xan decides to raise the girl, Luna, at the broken-down castle, with the help of Glerk, the gentle swamp monster (bog giant), and Fyrian, the tiniest dragon who fits in pockets.

The over-magicked toddler is inadvertently dangerous to herself and others, and Xan takes drastic steps to control the flaring magic. Years pass for Antain and Luna, but they are on a path to meet. As Luna’s 13th birthday nears, her magic begins to emerge on its own. Luna doesn’t realize what is happening as an ailing Xan has gone off on her own to rescue another baby. Concerned for Xan, Luna sets off after her with Glerk and Fyrian in close pursuit. Antain is on the way from the other direction thinking to save his town by killing the witch. He is oblivious to the evil presence hunting him and an unexpected ally that follows too. All of these characters are on a collision course that will change the lives of everyone.

This is whimsically magical and entertaining (and there are paper birds in the story). The characters are unique and delightful, and the story is woven from sorrow to hope. The story format is interesting with chapter titles following the form of “Chapter 1 In Which a Story is Told”. It took just a short time for me to get pulled into the story. I did enjoy the prose although I was a little disappointed with some predictability. Overall though, I found this to be a delightful fairy tale I recommend to tweens and adults.

Audio Notes: Christina Moore does a beautiful job with the narration. The characters have distinct voices, including deep voiced poetry from Glerk and high-pitched excitement from exuberant Fyrian. The audio experience was completely entertaining.