I was more engaged with this installment and really enjoyed all the dangers navigated by Ivy and her friends.
Birthright: Ivy Granger, Psychic Detective, Book 4
Written by: E.J. Stevens
Narrated by: Melanie A. Mason, Anthony Bowling 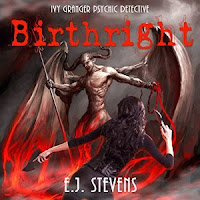 
Publisher's Summary
Being a faerie princess isn't all it's cracked up to be.
Ivy must go to Faerie, but the gateway to the Wisp Court is through Tech Duinn, the house of Donn - Celtic god of the dead. Just her luck.
Unable to share her secret with Jinx, and with Jenna called away on Hunters' Guild business, Ivy must rely on Ceff and Torn to lead her to Death's door, literally, and back again. As if that wasn't dangerous enough, there's no saying what horrors lay in store within the Faerie realm. Too bad the Wisp Court is the one lead Ivy has in the search for her father - and possible salvation.
Maybe hiding away and dodging sidhe assassins isn't so bad after all.
Birthright is the fourth full-length novel in the award-winning Ivy Granger urban fantasy series by E.J. Stevens. The world of Ivy Granger, including the Ivy Granger Psychic Detective series and Hunters' Guild series, is filled with action, paranormal mystery, magic, dark humor, quirky characters, bloodsucking vampires, flirtatious demons, sarcastic gargoyles, sexy shifters, temperamental witches, psychotic faeries, and snarky, kick-butt heroines.
©2015 E.J. Stevens (P)2016 E.J. Stevens


Review:
Ivy has saved Jinx but she has to leave her behind protected by Forneus. Ivy can’t tell them where she is going as she sets off to follow the clues to find her father. She cannot continue to hide out pretending to be dead so she has to find a way to convince the Faerie court to drop their death order on her. Ceff and Torn are by Ivy’s side to face the dangers as they journey through Faerie land. If they can travel through the water and the forest safely, they hope to find the house of the Celtic god of the dead. If he does attack first, they hope to find the secret door to Wisp.

Each step poses its own dangers and surprises. Some channels recognize Ivy’s blood as the royal blood of her father the former King of the Wisps – this could be for good or ill.

I really liked the dynamics between Ivy and Ceff which is growing deeper. Torn is along to add his usually snark and insouciance. Although there seems to be a little repetition within the story, there is plenty of action that keeps the story moving at a good pace. We meet new characters, some villains and some friends. There is a new hearth brownie who is an especially fun addition. Ivy has to go through heartache and the twists in the story are well done as dark secrets are revealed.

Now that I have read books 3 and 4, I do want to read more in the series. I have book 1 for Kindle so I will get to that at some point. I recommend this series to urban fantasy fans who enjoy adventures in the mixed world of humans and paranormals (although this one is mostly paranormals).

Audio Notes: I have to admit that I didn’t realize that Anthony Bowling was not the same male narrator as Book 3. He did a fine job with the numerous male characters while Melanie A. Mason continued to a portray the females with distinct voices. Mason manages to convey Ivy’s pain as well as her strengths. The narration definitely enhances the story experience for me.


I received this audiobook from the author for an honest review. It adds to my Audio Challenge. Please check my review of Burning Bright, Book 3 and don’t miss the Giveaway feature.

Posted by Martha Eskuchen at 10:28 PM