Book Review and Feature: City of Gold by Carolyn Arnold

This is an entertaining, action packed adventure with the plus of police procedure.
City of Gold (Matthew Connor Adventure Series Book 1)
by Carolyn Arnold 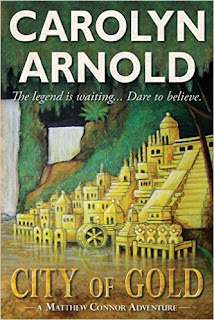 Action-adventure books for the mystery lover. In this series, modern-day archaeologist and adventurer Matthew Connor travels the globe with his two closest friends to unearth treasure and discover legends the world has all but forgotten. Indiana Jones meets the twenty-first century.

Finding the Inca’s lost City of Gold would be the discovery of a lifetime. But failing could mean her death...

Archaeologist Matthew Connor and his friends Cal and Robyn are finally home after a dangerous retrieval expedition in India. While they succeeded in obtaining the priceless Pandu artifact they sought, it almost cost them their lives. Still, Matthew is ready for the next adventure. Yet when new intel surfaces indicating the possible location of the legendary City of Gold, Matthew is hesitant to embark on the quest.

Not only is the evidence questionable but it means looking for the lost city of Paititi far away from where other explorers have concentrated their efforts. As appealing as making the discovery would be, it’s just too risky. But when Cal’s girlfriend, Sophie, is abducted by Matthew’s old nemesis who is dead-set on acquiring the Pandu statue, Matthew may be forced into action. Saving Sophie’s life means either breaking into the Royal Ontario Museum to steal the relic or offering up something no one in his or her right mind can refuse--the City of Gold.

Now Matthew and his two closest friends have to find a city and a treasure that have been lost for centuries. And they only have seven days to do it. As they race against the clock, they quickly discover that the streets they seek aren’t actually paved with gold, but with blood.


Review:
I generally begin my reviews with a synopsis of the story. However, in this instance it would be repetitive of the blurb which covers the summary very nicely.  There are some interesting personal dynamics and conflicts that add to this adventure.

Only a handful of close friends - Robyn, Cal and a few others - know that Matthew is more than an archaeologist. He hides the truth from his father who is funding the adventures of the elusive Gideon Barnes and becoming increasingly annoyed that the hunter refuses to appear at the gala events celebrating his priceless finds.  Although I don't agree with Matthew's estrangement and immature attitude towards his father it makes some sense and adds a side conflict to the story

Cal’s girlfriend, Sophie, is suddenly taken by someone who thinks they can trade her for an Indian statue that Matthew recovered. As Matthew bargains with Sophie's kidnapper he recognizes the hand of an old nemesis. Matthew cannot deliver the statue but he offers the lure of bigger treasure: the lost city of Paititi, or the City of Gold.

Matthew, Robyn and Cal rush off to Bolivia with two goons along to keep them honest and in hand. Matthew leads the team in the jungle like Indiana Jones, solving puzzles within tunnels and hopefully dodging deadly traps. Tensions are high and not everyone is careful enough to make it out of the jungle alive.

Meanwhile, back home, Sophie suffers the fears and trauma of being kidnapped. The greedy villain isn’t aware that Matthew has tasked the household butler (and treasure researcher), Daniel, with finding clues to locate Sophie from the proof of life videos. Also a bulldogged police detective is investigating the nice car found in a seedy part of town that leads him to a missing young woman who has connections to the mayor's son.

This is definitely akin to an Indian Jones story set in modern times. There is very fast paced action and danger in one scenario with some good investigative twists at the home front. The two lines of the story worked well to keep interest moving and to make the book more than just a fun, albeit deadly, treasure hunt. I appreciated the bits of police tactical details that were included to balance out the hi-jinks of the hunters.

The touchy relationship between Matthew and Robyn is another dynamic that added intrigue.  I wondered about their past history and I was rooting for them to pull together. Since this is the first in the series I imagine more may be shared about their relationship in books yet to come. I recommend this to readers who enjoy a fun thriller and mystery, topped with a touch of romance and a touch of family drama.


I received this title through Great Escape Virtual Tours for an honest review. It qualifies for C on my Alphabet Soup challenge and for TBR Triple Dog Dare.

CAROLYN ARNOLD is the international best-selling and award-winning author of the Madison Knight, Brandon Fisher, and McKinley Mystery series. She is the only author with POLICE PROCEDURALS RESPECTED BY LAW ENFORCEMENT.™
Carolyn was born in a small town, but that doesn’t keep her from dreaming big. And on par with her large dreams is her overactive imagination that conjures up killers and cases to solve. She currently lives in a city near Toronto with her husband and two beagles, Max and Chelsea. She is also a member of Crime Writers of Canada.

And don’t forget to sign up for her newsletter for up-to-date information on release and special offers at http://carolynarnold.net/newsletters.

Click HERE for a full list of Tour Participants and to find other reviews, author interview and excerpts. 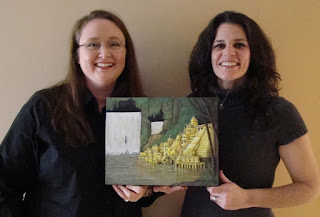 Video on the painting for the cover:


(If you have any trouble viewing the video try the direct link to YouTube:

https://youtu.be/-JJIa9OStuM )
Posted by Martha Eskuchen at 5:30 AM