This is a sufficiently entertaining listen even with a few drawbacks.
The Maze Runner: Maze Runner, Book 1
Written by: James Dashner
Narrated by: Mark Deakins 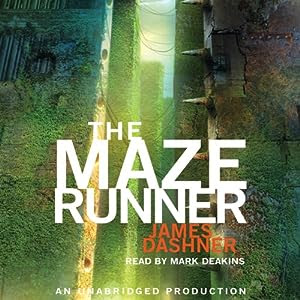 Publisher's Summary
When Thomas wakes up in the lift, the only thing he can remember is his first name. His memory is blank. But he's not alone. When the lift's doors open, Thomas finds himself surrounded by kids who welcome him to the Glade - a large, open expanse surrounded by stone walls.
Just like Thomas, the Gladers don't know why or how they got to the Glade. All they know is that every morning the stone doors to the maze that surrounds them have opened. Every night they've closed tight. And every 30 days a new boy has been delivered in the lift.
Thomas was expected. But the next day, a girl is sent up - the first girl to ever arrive in the Glade. And more surprising yet is the message she delivers.
Thomas might be more important than he could ever guess. If only he could unlock the dark secrets buried within his mind.
©2009 James Dashner; (P)2009 Listening Library


Review:
Thomas wakes up in a boxed room with little memory. He is extracted by a group of boys, ages 12 to 17 or 18. They live in a community they call the Glade that is quartered with a garden area, stable/butcher area, living quarters and the delivery box. Every thirty days a new boy is delivered in the box and all the supplies the group needs for survival. Surrounding the Glade is a maze with stone doors that open each morning and close each night. Each boy has a skill and assigned tasks to help the group. Certain of the boys are runners - eight boys who run in pairs every day to map the maze looking for a way out.

The boys are reluctant to answer Thomas’s many questions but slowly he gains friends, including a rather clumsy young boy of 12. There is another teen boy that is very hostile and insists that he remembers Thomas and that he is an enemy.

Even having been shown the monstrous creature that lives in the maze, and having seen a boy tormented while recovering from injury by one of the monsters, Thomas is set on becoming a maze runner. It is explained that he has to prove himself first. He has to go through each job training to determine the best assignment.

Although Thomas arrived as expected the next day things go totally off schedule when a girl arrives with a message that she is the last one. Not only that but she states that everything is going to change right before she falls unconscious.

Thomas makes a forbidden choice that turns into a miraculous rescue. Some of the leaders want him punished for disobeying the rules while others want him promoted. His actions bring more worry and turmoil as the group learns that they are now in a race against time and the monsters if they want to survive.

It is clear that outside forces have been watching the boys. Their goals and motives are not so clear. As the book draws to a climax some horrors occur and secrets are revealed while other surprises are apparent to the reader but not to the characters. I suspect the ending will lead some to grab the next book and some maybe not.

When I first started listening it brought to mind The Lord of the Flies. However, as the work progresses it shows more similarities to the cruel control issues in The Hunger Games. I felt there was some slowness in the beginning with a bit of telling rather than showing. It gets better when the action picks up with discord and danger to the end. As an adult you have to be mindful that these characters are young teens so they don't think like adults. I recommend this to those who enjoy a fantasy/sci fi thriller built around society issues.

Audio Notes: Mark Deakins did a good job with the narration. I was able to keep track of the characters and I felt any pacing issues related to the story itself, not the narration. The audio enhanced my enjoyment of the story as it helped it move along beyond the slow parts.


This is from my own Audible Library. It qualifies for Audio Book Challenge and TBR Double Dare since I picked it up in 2014.
Posted by Martha Eskuchen at 10:32 PM