I like the primary character in this mystery where church fires spark confessional issues for a concerned Priest.
Cleansed by Fire: A Father Frank Mystery
Written by: James R. Callan
Narrated by: Jonathan Mumm 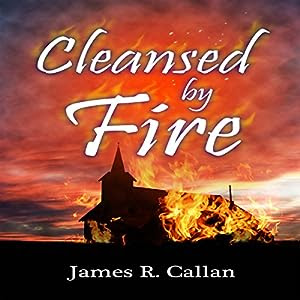 Publisher's Summary
Arsonists have torched two churches in a small Texas town, plunging its residents into a state of fear. Father Frank DeLuca, pastor of Prince of Peace Church, is thrust into an impossible dilemma when he hears that another church will be burned. The disturbing information comes to him via the confessional, and church law forbids him from telling anyone - even the police. Still, he can't sit idly by, and no law prevents him from looking into the matter himself. The crimes have set the town's residents on edge, fraying the bonds of trust. Is the mysterious newcomer with ties to the local drug scene involved? What about the man who says maybe the churches deserved to burn? Or the school drop-out who threatens the priest with a knife. Father Frank digs deeper into the town's secrets when a man is murdered. His investigation leads him dangerously close to the drug scene and he discovers the danger has come to him. Can he save his own church? Can he save his own life?
Cleansed by Fire is the first of the Father Frank Mysteries.
©2012 James R. Callan (P)2014 James R. Callan


Review:
Father Frank is a Catholic Priest who has a hands on approach to helping his parishioners. He sincerely seeks the Lord’s guidance and help but he plays an active part too. He is involved helping the youth of his church by playing and organizing basketball games and he keeps tabs on other activities such as a new “pop” band.

An arsonist has burned down a Baptist church in the community and Father Frank takes a personal interest. That interest is increased by an anonymous confession of a youth who seems to have some knowledge but won’t reveal it. Father Frank thinks he knows which boy makes the confession but he is restricted from disclosing any information given in the confessional. As more Baptist churches are burned down Father Frank lines up a handful of suspects. There is the rough, mysterious, man who keeps hanging around the ball park asking about drug sources; a young man who seems to have a drug problem; an angry teen who was abused as a young boy by his mother’s boyfriend; and a man in a bar who sneers at Father Frank as he burns a paper steeple.

Meanwhile Father Frank encourages the budding romance of an active widow in his church who has captured the heart of the local police detective. These two add a nice, gentle side line to the mystery story.

I really liked Father Frank’s character. He lives his grounded faith in a real way, including some impulsive action. The story moves along well with Father Frank actively investigating any clue he can follow. There are side lines of interest including the youth choir and the sweet romance. There is danger, faith and sweetness in a short package that combine to make this a solid Christian cozy mystery.

Audio Notes: I’m sorry to say that I found the narration rather dry. It seemed more like a reading than a narration. I still enjoyed the overall book but I recommend a prospective listener try the audio sample to decide if this might be a story to read in print or ebook instead of audio.


I received this title for review through Audiobook Jukebox.
This qualifies for AudioBook Challenge and "C" in Alphabet Soup challenge.
Posted by Martha Eskuchen at 5:56 PM