This is another fun, easy read in the Ladies Shooting Club Series. 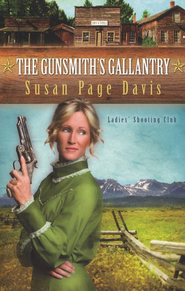 
Product Description
Widowed gunsmith Hiram Dooley is in a fix. His widowed sister-in-law believes Hiram's duty is to marry her, and shopkeeper Libby Adams has no idea that he loves her. When the schoolteacher's uncle is murdered, Libby and Hiram team up to solve the crime. Will Hiram be able to tell Libby his true feelings?


Review:
Hiram Dooley has been reclusive for several years since the death of his wife in childbirth. He is pleased his sister, Trudy, has found a beau in his best friend, town sheriff, Ethan (The Sheriff's Surrender - Book 1). Although he is beginning to wonder when Ethan is going to get the gumption to make Trudy his bride. Hiram is also beginning to wonder if he might be able to find love again as he becomes more interested in the town shopkeeper, widow Libby Adams.  First though Hiram has to deal with the complication of his first wife’s prissy sister-in-law who has moved in with the idea that Hiram should marry her!

Libby hasn't been looking for another husband but she keeps noticing the steady strength, honesty and goodness of her best friend’s brother, Hiram. If they are both ready to move away from their morning pasts, perhaps her future could hold more than just a widow’s life running the town mercantile.

Although this book presents itself as Libby and Hiram’s story, their relationship is really quietly building in the background while the action revolves around Isabel and her father, Cyrus. Cyrus is the biggest land owner in town and wealthiest man as he runs the stage and bed & breakfast among other interests. One night a strange, rather unkempt man shows up at their house and he is introduced to Isabel as her Uncle. This is news to Isabel who never heard her mother talk about a brother. Isabel doesn't hear the man leave but a bit later discovers her father secretly burying something behind the barn. Isabel seeks comfort and help from Libby as she is frightened especially as her father becomes more and more uncommunicative. Then he starts trying to sell land around town to raise money but Isabel doesn't know why.

A new group of rough cowboys show up in town causing some ruckus for the sheriff and raising concerns from other townsfolk. It seems that the family trouble between Cyrus and Isabel is related to the rough man who has set up ranching on one of Cyrus’ properties.

Before Ethan, Trudy, Libby and Hiram can help Isabel to figure out what is going on with Cyrus she is kidnapped. It is heartwarming when the whole town steps forward to help Cyrus rescue one of their own.

There is gentle humor and western action to keep this story interesting. It moves at a good pace especially since we know the town characters from the first book. I really enjoy how the author brings in Christian messages of love, forgiveness and trust by making them part of the characters' lives in sharing rather than a preaching situation.

This is the second book in the series. Although it could be read as a stand alone I recommend reading the books in order to get a better grasp on the manner town characters. One of our book club members thought we were reading book 3 instead of 2. She said that book 3 is a fun read too.


I picked up book 1 and 2 in this series at very good prices for Ladies Book Club.

I have decided to giveaway print books 1 and 2 separately but in this one entry - so TWO WINNERS get one print book each. Please note that The Sheriff's Surrender is still available for $1.65 at CBD and The Gunsmith's Gallantry is $1.99. All three books in the series are available in ebook format from CBD for the very reasonable price of $6.05 with no postage costs! SO - I am adding a THIRD WINNER for the ebook of all three stories!
ENTER THIS GIVEAWAY for the gently used Print Copies.

ENTRY FORM HERE
Don't forget to fill in the form for entry!
I have noticed a few commenters who forgot to enter through the Form.
For 3 Extra Bonus entries comment on the first review, second review OR
visit the author's website and tell me something you like/learned there.
* This contest is open to U.S. address only for print but worldwide for the ebook!
* This contest will close 10 PM (Central) on March 26, 2014.
The winner will be randomly selected from all entries.
WINNER WILL BE ANNOUNCED after March 26, 2014.
Winners will have 72 hours to respond by email or the winners form linked in the announcement.
Posted by Martha Eskuchen at 1:43 PM