What Are You Reading, is where we gather to share what we have read this past week and what we plan to read this week. It is a great way to network with other bloggers, see some wonderful blogs, and put new titles on your reading list.
I finished another good five books this week.  I posted three reviews, one with Hachette (double) Giveaway, one ARC Giveaway and one old copy Giveaway.  I also posted the Friday Pick Giveaway; Enquiring Mind Meme with Giveaway, Sunday post and a winners' post.

I only visited a handful of blogs last week. I fixed my laptop internet so I hope I will get to visit a bit more.  These were last week's posts plus Winners' posts not listed.

by Mary Daughtridge
I really enjoyed this!
I will post the review and giveaway on Tuesday.

ALSO
To See (What You See is What You Get)

These were short and fun
YA paranormals.
I will do a review post this week.

Product Description
Now that Ana can see, her summer has taken on a new direction. Instead of shopping and going to the beach with friends, she has to register with the Seer’s Council. There, Ana meets Eric, a hot guy who happens to also be a vampire seer. Eric is impressed that Ana took on a vampire all by herself but wonders if Victor truly is dead.

So Ana and Eric return to the scene of the crime and make a dangerous discovery, one that could put their lives in danger. Snooping around during the daytime seems safe enough, until they lose track of time and night quickly descends. Vampires must hide in shadows, but the moon offers all kinds of opportunities.

Are Ana and Eric the hunters… or the prey? 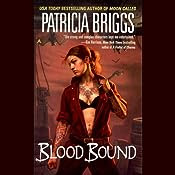 Blood Bound: Mercy Thompson, Book 2
by Patricia Biggs
I enjoyed the second in this series. I will try to do a review this week.

My own TBR.
Mechanic Mercy Thompson has friends in low places - and in dark ones. And now she owes one of them a favor. Since she can shapeshift at will, she agrees to act as some extra muscle when her vampire friend Stefan goes to deliver a message to another of his kind. But this new vampire is hardly ordinary - and neither is the demon inside of him.

by Agatha Christie
This is in the Friday Pick group and
I decided to read it before it was won.
Line Edits/Releases:
Still finalizing a novel and a novella for release this week. 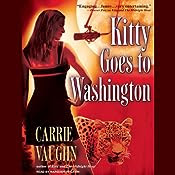 Kitty Goes to Washington: Kitty Norville Book 2
by Carrie Vaughn
I am almost done listening to this entertaining story.


Product Description
The country's only celebrity werewolf, late-night radio host Kitty Norville prefers to be heard, not seen. But when she's invited to testify at a Senate hearing on behalf of supernaturals, her face gets plastered on national television. Kitty has been in hot water before, but jumping into the D.C. underworld brings a new set of problems - and a new set of friends and enemies, including the vampire mistress of the city; a super-hot Brazilian were-jaguar; and a paranoid, Bible-thumping senator who wants to expose Kitty as a monster. Kitty quickly learns that in this city of dirty politicians and backstabbing pundits, everyone's itching for a fight.

Mary of Carisbrooke: The Girl Who Would Not Betray Her King

by Margaret Campbell Barnes
Now that I have started this
I am enjoying the good
writing on this historical fiction.

Product Description
"Margaret Campbell Barnes has been one of the most reliable of England's historical novelists."
-Chicago Tribune
A Girl, A King, and the castle that changed them both Forever...
Charles I, king of England, thought that Carisbrooke Castle would be safe, an Isle of Wight refuge far from the madding crowd of Cromwell. But Charles ran straight into the arms of betrayal, his retreat morphing to prison and his allies few and far between.

Mary, a quiet servant girl in awe of her king and country, vaults into intrigue and danger as she helps to plot the king's escape.

A moving story of royal hopes and misfortunes, Mary of Carisbrooke is at its heart the tale of a charming girl who is as romantic and alluring as she is smart and bold. Loyal to herself and to the Crown, Mary's brush with history reveals just how quickly fate can shift the paths of power.

A Morning For Flamingos

by James Lee Burke
This is another audiobook in the Friday Pick group I wanted to listen too before someone won it. :-)

Clutching the shards of his shattered life, Cajun detective Dave Robicheaux has rejoined the New Iberia police force. While transporting two death-row prisoners, Dave is wounded and his partner killed -- reopening the doors to a past he would have rather kept closed.
Now he's trailing a killer into the heart of the Big Easy's underworld. Increasingly possessed by his undercover role, Robicheaux surprisingly forms an intimate bond with a Mafia don. Embroiled in a world of drug dealers, prostitutes and double-crosses, Robicheaux must still confront his most dangerous enemy -- himself.
Rich with fascinating characters and dramatic plot twists, the audio debut of James Lee Burke and his Cajun detective Dave Robicheaux recalls the best of Raymond Chandler's Philip Marlowe -- tough, complex and thoroughly entertaining.

by Joyce DiPastena.
This is a "won book" I have been wanting to read.

Product Description
"Clothilde." He spoke the name on a breath like a prayer. Then he lowered his head and kissed her.
Her heart is lost in that first embrace, her world is shaken to its foundations. There is just one problem; her name is not Clothilde. It is Siriol de Calendri. Trained in the art of illumination in the far-off city of Venice, Siri is directed by her late brother's will to the county of Poitou in France, where she enters the guardianship of her brother's friend Sir Triston de Brielle. Once in Poitou, Siri hopes to find employment in an illuminator's shop - until Triston unexpectedly snatches her heart away with a kiss.
Triston is a man of quiet honor and courage, but the guild he carries for the death of his late wife, Clothilde, has left him numb and hesitant to love again. Worse yet, Siri bears an uncanny resemblance to his lost love. Or does she? Her merry laughter and twinkling eyes are very different from his late wife's shy smiles and quiet ways. Yet when he gazes into Siri's face, all he sees is Clothilde.
Then Triston's past returns to threaten them both. Will his tragic life with Clothilde be repeated with Siri? Trapped between the rivalry of the king's sons on the one hand and a neighbor out for vengeance on the other, Triston realizes it would be safer to send Siri away. But how can he bear to lose her again?
Siri is determined not to be cast off and not to live in another woman's shadow. She has illuminated many a priceless book with pen and paint. But can her own vibrant spirit illuminate the darkness in Triston's soul and make his heart beat for her alone?

Audible -I think the next listen will be The 39 Clues, Book 1: The Maze of Bones by Rick Riordan.

I am listening to The Listener's Bible NIV
read by Max McLean. I am at 1 Samuel 24, Psalm 125 and John 17.
Line Edits:  Almost finished with finalized formats on Her Dreams Come True by Miranda Heart, Novella to be posted this week and working on final formats on Sword of Virtue by Joy Brooks.  Then  formats Life After the Undead by Pembroke Sinclair and Soylent Red by Jamieson Wolf.

I will post June books next week.
Posted by Martha Eskuchen at 9:50 PM