It's in the cards: if you like action, mystery, horror and mysticism this is a book in your future.
Rogue Oracle (Delphic Oracle, Book 2) 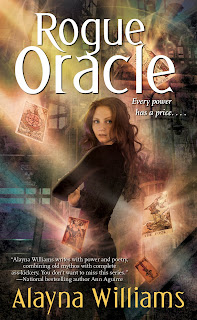 The more you know about the future, the more there may be to fear.
Tara Sheridan is the best criminal profiler around - and the most unconventional. Trained as a forensic psychologist, Tara also specializes in Tarot card reading. But she doesn't need her divination skills to realize that the new assignment from her friend and sometime lover, Agent Harry Li, is a dangerous proposition in every way.

Former Cold War operatives, all linked to a top-secret operation tracking the disposal of nuclear weapons in Russia, are disappearing. There are no bodies, and no clues to their whereabouts. Harry suspects a conspiracy to sell arms to the highest bidder. The cards - and Tara's increasingly ominous dreams - suggest something darker. Even as Tara sorts through her feelings for Harry and her fractured relationships with the mysterious order known as Delphi's Daughters, a killer is growing more ruthless by the day. And a nightmare that began decades ago in Chernobyl will reach a terrifying endgame that not even Tara could have foreseen…

Review: This book is packed full of action, unique characters and interesting data.

Tara is a sharp, professional forensic psychologist and profiler. Her tools however are unique. She is  associated with, but not quite part of, a group of women oracles known as Delphi’s Daughters. Each woman in the group has a unique skill and together they are intended to help protect the world about them.  Tara’s special ability is in reading Tarot cards. The cards almost slide out of the deck to help give her clues to the people and circumstances she is facing.

Harry is part of a Department of Justice Special Projects team where he is apparently accustomed to seeing some weird things.  Although he wouldn’t normally accept that Tarot cards could be of any use he has seen Tara in action and acknowledges that her hunches based on the cards are accurate and very helpful.

The villain in this story is rather alarming. The secrets he is selling are dangerous. As they chase after him they begin to think of him as a Chimera and the more clues they get, unfortunately from the crime scenes of missing spies, the more perplexed the team becomes.

This book is full of lots of great details from Tarot readings to the history and horrors of Chernobyl. I have mixed feelings about the Tarot readings but since I had little knowledge of them I found the descriptions very interesting.  The details of the damage done by the nuclear disaster is chilling especially in light of the recent tragedy in Japan.

There are several secondary characters with quirks and catchy or sometimes fiery personalities.  The Delphi Daughters are peripheral but the Pythia, the leader, is particularly interesting. There is humor added to the tense government departments as Tara, Harry and a few other team members race to catch the criminal who is killing spies and selling deadly secrets. I really liked the whole combination of fantasy and suspense and the multiple but distinct characters. The author's work experiences, including politics, criminology and technology, helped to make the story seem very authentic even if it is fantasy.

This is a very engaging read and fast paced as it keeps you wanting to know what will happen and how Tara will handle her dreams, her cards and ultimately the killer.  Book two with Tara and Harry worked fine as a stand alone, however, it did make me want to read the first book and check out other books by this author.

Check out more of the Rogue Oracle Tour at:

http://bewitchingbooktours.blogspot.com/2011/01/alayna-williams-rogue-oracle-tour.html
Posted by Martha Eskuchen at 6:25 AM