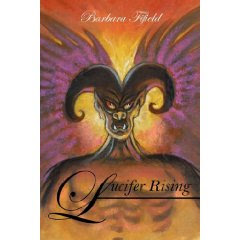 
Product Description
Can Elsa ever escape cult leader Tyrell, a reincarnation of the devil? What about him does she find so mesmerizing? Tyrell has lured women into his snare over many reincarnations. Will he succeed with Elsa? Or will she be able to break away from him?
Back Cover:
When ace reporter Elsa Eldridge is assigned to profile a local religious cult leader named Tyrell, she doesn't expect to fall under his spell. But Tyrell's charismatic personality, muscled body and piercing gaze make him hard to resist, and soon Elsa is enamored. But all isn't what it seems. And what Elsa doesn't know could make her regret the day she ever laid eyes on this spiritual seducer. Before long, cracks show in Tyrell's glossy veneer. There's the intense possessiveness that threatens to burst into violence; the not-even-trying-to- hide-it womanizing; and the rumors about his prior life. Lawsuits from former lovers dog him; an ex claims he committed the ultimate sin. But through it all, Elsa is drawn as if by some mystical force into his world. Every time she succeeds in breaking away, he brings her back into his snare. Can Elsa find the strength and courage to stand up to the man she lusts after? What's the truth behind the whispered allegations? And what explains the bizarre sensations Elsa has that Tyrell is visiting her when he's not around? Savvy, sexy and spiritually aware, Lucifer Rising mixes romance with paranormal intrigue for a thriller that will keep you guessing right up until the very last page.
Review: This story unfortunately did not live up to its cover or blurb. I was expecting something with a distinct paranormal element.  This is really the story of a woman who allows herself to be continually sucked back into a “going nowhere” relationship with a charismatic, self-centered and unfaithful man.  Elsa mistook Tyrell’s cult leader personality as some paranormal power or attribute.  Really it was a matter of lust winning out over good sense.
The characterization was well done even if I wanted to fuss at Elsa for giving the creep, Tyrell, the time of day.  The writing moved along all right although it lacked zest.  This just wouldn’t have been the type of story I would pick to read if I had known it was like a soap opera drama.  Someone needing to be reminded why they shouldn’t get caught in an 'on again, off again' relationship with a philanderer might like to read this story.


***
Thank you to Bostwick Communications and the author who provided this book for review.
Posted by Martha Eskuchen at 9:28 PM